ZOLA Challenges the Elasticity of Tweets 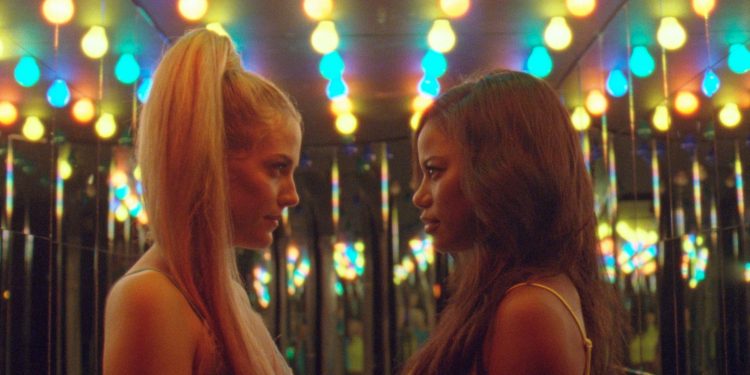 ZOLA8
There might be moments when the story gets lost in the sauce. But from it’s the commitment of the cast, to the vision of Bravo, the film - and Zola as a figure - never get lost in the game.
8

ZOLA: Not kind of long but full of suspense.

It was the tweet thread heard ‘round the internet.

In 2015, A’Ziah “Zola” King spun a dramatic tale in 148 tweets as shiny as gold. A 48 hour-adventure that delved into the unpredictable underbelly of sex work and violence. If you’ve been a Twitter user as long as I have, you see threads with dramatic arcs come and go down the timeline. But no thread before - or since - Zola’s had the nuance and length that kept you refreshing your feed. But a thread that engages doesn’t necessarily means it can be translated beyond the platform its placed on. Therein lies the challenge: can you take a series of tweets and transform it into a tangible story fit-to-screen? Director/co-writer Janicza Bravo and co-writer Jeremy O. Harris take up the quest with gusto, delivering a film that pairs tension with absurdity.

Zola (Taylour Paige) is a Detroit waitress who meets Stefani (Riley Keough) while on her shift. The two strike up a fast friendship, with Stefani inviting Zola to dance with her in Florida over the weekend. Joined by Stefani’s roommate X (Coleman Domingo) and boyfriend Derek (Nicholas Braun), what was supposed to be a fun getaway turns into a weekend kidnapping, forcing Zola into an unbelievable situation.

A Cast and Director that commits to the journey

The prominent source of ZOLA’s zaniness is a stellar cast that fully lean into its off-beat characters.  Newcomer Taylour Paige is the perfect protagonist for this story, translating King’s voice from her tweets perfectly. Paige also narrates, breaking the fourth wall with well-timed moments to keep audiences laughing. As Stefani, Riley Keough gives a wannabe “hood” white chick aesthetic to the film, something that is thankfully mocked and not praised. But it’s Coleman Domingo’s surprisingly menacing turn as X, the roommate/pimp, that will surely be the talk of the festival. Domingo has a chameleon-like effect on some of your favorite films and TV shows; he doesn’t make big waves (yet!) when announced, but you’ll be happy he was cast once you see him - and this performance is no exception.

Behind-the-scenes, Bravo and Harris produce a solid script that respects the source material while stretching it to its limit. That stretching, however, reveals the complexities of using tweets as a foundation of your story, especially at the film’s halfway mark. King’s thread is a stream of consciousness (and one she admits she embellished on in certain areas, after fan excitement.) In 148 tweets, there will be moments where the story will feel uneven, not capturing the fervor of tweets prior. Disappointingly, the film script falls victim to the same issues. For ZOLA, the film peaks midway into its 90 minutes and struggles to taper out towards its conclusion. In particular, there’s an odd scene that flips the storytelling on its head, sharing the perspective of Stefani vs. Zola. While an admittedly hilarious moment in the film, it’s placement is so out-of-left-field that it throws off the pacing.

Even with it's flaws, it's worth the ride

In the end, ZOLA struggles to land to its ending, petering off in a way that’s befitting to the end of a long thread. From a structure standpoint, the film demonstrates that tweets lack a certain amount of elasticity to make it over to the silver screen. But that doesn’t diminish the iconic nature of King’s thread, nor does it diminish how fun ZOLA is. There might be moments when the story gets lost in the sauce. But from it’s the commitment of the cast, to the vision of Bravo, the film - and Zola as a figure - never gets lost in the game.

Follow more of our Sundance 2020 Film Festival Reviews and Coverage on our Press Page Page: https://press.mtrnetwork.net