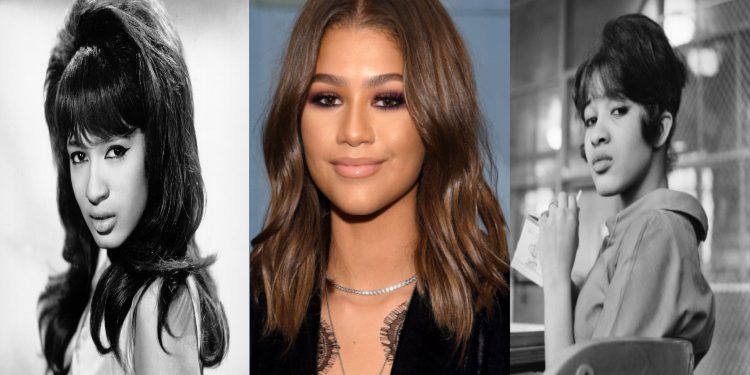 In a move that only makes sense, Deadline's reporting that Euphoria's Emmy-winning star, Zendaya, is now attached to play Ronnie Spector in an A24 package for a film about her life. New Regency's set to partner with A24 (last collaboration, The Lighthouse) for the project. The deal's finalized for the rights to both Spector's life and the memoir, Be My Baby, written with Vince Waldron. According to Deadline, Zendaya was Spector's first pick to portray her younger self.

Who is Ronnie Spector?

Ronnie Spector, born Veronica Bennett, is the mixed-raced daughter of an Irish father and a Black mother. She's an American singer and front-woman for 60s girl group the Ronettes with her older sister Estelle Bennet and cousin Nedra Talley best known for hits, Be My Baby, Baby, I Love You, and The Best Part of Breakin' Up.
If you let Deadline tell it:

"She grew up in Spanish Harlem and started the girl group The Ronettes with her older sister Estelle Bennett and their cousin Nedra Talley. They were signed by famously volatile record producer Phil Spector to his Philles Record label and there they had their breakthrough hit Be My Baby. She married Spector and as she writes in the book, it was clear she had made a big mistake when she woke up one morning to the sound of bars being installed on the windows of their mansion. She smartly fought for the rights to her music in the subsequent divorce, and she was eventually inducted into the Rock and Roll Hall of Fame and had a second wind when reprised her most famous hit in singing a duet with Eddie Money on Take Me Home Tonight."

There are whispers afoot that Jackie Sibbles, Pulitzer Prize-winning playwright, may be on board to write the script. If that prove to be true, this project may just be the next one to lead to Zendaya's name being mentioned come awards season. This go-round saw her as the youngest - second Black woman - actress to win Best Lead in a Drama series this Emmy season.
While we wait to see what comes of this project, you can catch Zendaya in Warner Bros.' Dune and Netflix's Malcolm and Marie.