Kriss8.5
Hand's down the best film in the DCEU. The minor flaws don't come close to outweighing the good. The action, the themes, the setting, all land and more than compensate for a weak villain
8.5

Sometimes the right “man” for the job is a woman. Wonder Woman is hands down the best film in the DCEU. That might not seem like too high of praise considering the critical responses and polarizing nature of the rest of DC’s films so let me put it another way: Had Wonder Woman been the first movie to launch DC’s cinematic universe, there would be less worry about the future of DC’s movies and more excitement at the possibilities. 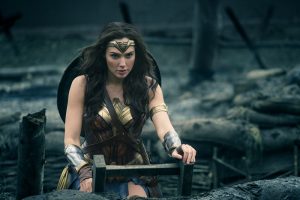 Some will wrongly compare this film to Iron Man or some other MCU origin story but Diana Prince should be given her proper due and only compared to her true peers. Wonder Woman provides the hope & optimism missing from Man of Steel and the commitment to go full comic book that Batman Begins lacked. Where Suicide Squad gave us a glimpse of what the DCEU could be outside of Snyder and Studio influence & interference, Wonder Woman gives a complete view. The film strikes a great balance between funny, lighthearted moments and the serious somber setting of war. It’s fun and inspiring while also being mature and dark at times.

With a setting like World War I and the horrors of trench warfare, it would have been easy for this film to be dark and depressing throughout. To avoid this, Patty Jenkins put together a film that keeps focus on Diana being a beacon of hope and a force for good. There are clear lessons learned from Man of Steel. Both Diana and Clark are tasked with saving humanity. Both at some point question if humanity is worth them saving. But where Man of Steel does more telling than showing (and does so with flashbacks), Wonder Woman shows us while telling. We watch in real time as Diana’s naivete is washed out by the horrors of war and mankind’s cruelty and so its much easier to understand. Also, it should be noted that Wonder Woman lacks some of the morality conundrums of her fellow Trinity counterparts. Diana is a warrior, so unlike Superman or Batman, audiences, fans and critics should have no problem with her taking the lives of bad men.

In Batman v Superman, while Gal Gadot’s Wonder Woman stole the show there were questions if she could carry a whole movie. Those concerns should be gone now. Gadot is clearly growing and expanding with this role, not unlike Chris Evans as Captain America. Jenkins even asked more of Gadot in this movie, by having Gadot play a naïve and new to the world Diana that is different from the role she played in Batman v Superman. 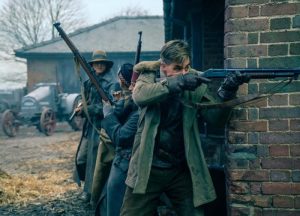 I wasn’t sure how I would feel about Chris Pine in this movie. I was worried that they would put too much focus on Steve Trevor and force a relationship between him and Wonder Woman. To be honest, once again, I think this shows why having a female director for this film was so important. Chris Pine is given just the right amount of screen time and the relationship aspect is handled pretty well. The more interesting aspect of their interaction though is how Pine’s character serves as the “well intentioned man” to Gadot’s “more capable and qualified woman.” Those scenes make the movie extremely relevant to current reality even with its World War I setting.

Perhaps the weakest part of this film is the rest of the cast is just not given much to do. We don’t spend much time on Themyscira so most of the Amazons do not get large roles. Lilly Aspell plays eight-year-old Diana and she’s adorable. Connie Nielsen as Queen Hippolyta and Robin Wright as General Antiope are given the bulk of the time since they are directly responsible for raising Diana. Some might be a little upset by the lack of development of the Amazons, particularly with how brief some of the women of color are on screen. While not wrong, I will give two points that should help ease any concerns:

2) Future films will clearly revisit Themyscira. Nothing prevents Jenkins from going back and delving deeper into these characters in a sequel (Yes, WB, just go ahead and give Patty Jenkins the sequel now).

*EDIT* After watching the film a second time, I must say that I was wrong. In scenes with Amazons, WoC are almost always present and most times a WoC speaks. I think Anne Wolfe is the only one who doesn't speak but she has more action scenes. Again, not saying there couldn't be more but I think credit should be given because I believe Patty Jenkins and team made sure that WoC were included. 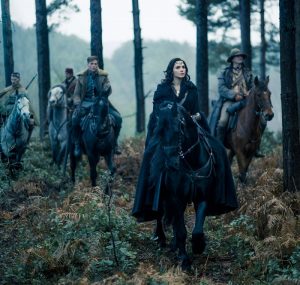 Said Taghmaoui’s Sameer is probably the most memorable out of the rest of the cast just for the comedy he provides. I feel as though there was supposed to be more with Ewen Bremner’s character but it was cut from the film. Ironically enough Wonder Woman suffers from the same "weak villain" problem many complain about with the Marvel Cinematic Universe.  The movie tries to hide the true identity of the villain and does a decent enough job (Although I was able to figure it out pretty quickly). But even then, the villain(s) of this film are there just to move the plot along. General Ludendorff (Huston) and Dr. Maru (Anaya) aren’t given much to do at all. However, just like with Marvel films, the lack of a solid foe isn’t too much of a dampener because this film is more about the journey. Honestly watching Diana’s innocence and naivety about mankind challenged and almost corrupted throughout the film was more interesting than her final fight.

Action-wise, this film is packed. From watching the Amazons take out German soldiers on a beach to Wonder Woman crossing “No Man’s Land” to help take back a town, there’s plenty to love. The Amazons have a unique style of fighting that we haven’t seen before in not only the DCEU or the MCU. Given that this is a warrior society, I would expect nothing less. Diana herself uses her lasso even more than in her appearance in Batman v Superman and it is glorious. 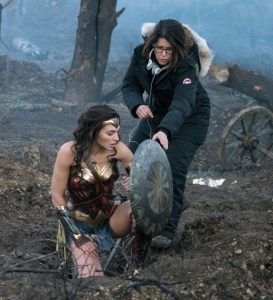 It cannot be understated how important it is that the director of Wonder Woman was a woman. Patty Jenkins is a world class director yet I still see people respond to her getting this opportunity as if she didn't direct a film that won for Best Actress. Jenkins more than earned her right to direct this film and the results speak for themselves. The messaging in Wonder Woman is clear but not sloppily forced. Diana never loses her agency and the film never shifts the focus off of her. Without Jenkins, Wonder Woman would probably go from the best reviewed DC film to another film that sits in the middle at best. Credit where credit is due.

Wonder Woman works as a metaphor for the entire DCEU. Where men (or male characters) have failed, she steps up willingly to the plate to save the day. This film skillfully avoids all the pitfalls previous DCEU films have fallen into. More films like this and fans of DC characters will spend more time geeking out than complaining and feeling let down. Fans have been waiting 40+ years for Diana to get her own live action movie and while the wait is inexcusable, the resulting product should do everyone proud.