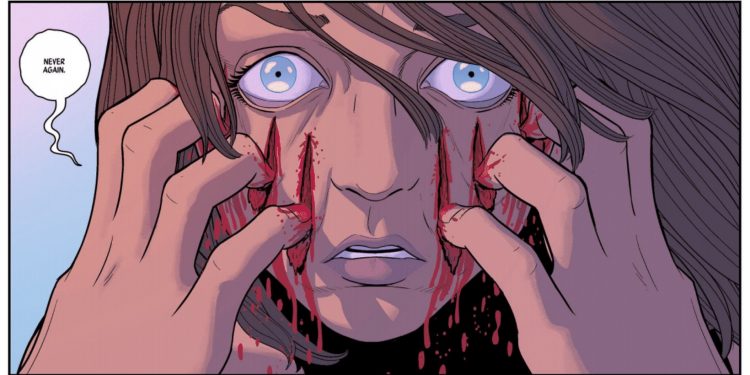 Hey everyone. I'm back with a double review because WicDiv 36 dropped right before I left town but I'm glad to be able to review these back to back because it allowed me to go back into my WicDiv archives and pull out some gems. There are two more issues in this arc and all of these threads are coming together to form quite the tapestry.

Kieron Gillen talks about this in his notes but man, this must have been a bitch to draw. After issue 34 showed us the genesis of the recurrence, we see Ananke and Persephone meet again for the first time. Ananke says, she's missed her ... and then she murders her. This is followed by a masterful sequence in which Jamie McKelvie illustrates each meeting between Ananke and Persephone from 3862 BC until 2014. Sometimes they fight, sometimes they embrace in weary sadness. Sometimes Persephone is a man, often times a woman. Occasionally, Ananke is young (Minerva?), but mostly she is old and stooped or maimed. Sometimes Persephone is killed before the other gods even know they've been reborn. Most often, Ananke kills Persephone while their back is turned. They meet throughout the centuries and the continents with each rendering of the time period and region meticulously researched by Dani V. As we know, our Persephone managed to survive Ananke's murder attempt and the last panel is Minerva being comforted (lulled?) by Ananke saying "It will always be okay." Minerva and Ananke have been trading places for some time now. Does the ritual make Ananke the younger goddess so she can survive to the new recurrence? 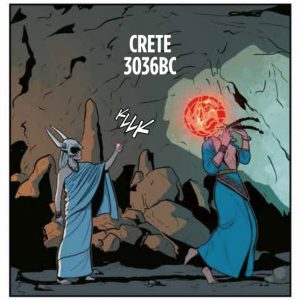 In the opening of issue #37, it would seem so. Now it's 3127 BC and a young Minananke seems to be trying to circumvent the cycle by using her own head in the ritual. She turns to flame and then (after another brilliant visual of 90 black panels representing the 90 years between cycles) Minerva is reborn on Crete in 3037 BC, scratching scars under her eyes as she exclaims "Never again." This explains why the panel of Ananke killing 3036 BC, shows a young Minanake killing Persephone. Is 3127 BC the first time Ananke gets tired of living and tries to break the cycle? If so, it doesn't seem like it took long for her to regret her decision and like her sister told her "Forever makes liars of us all."

What Is Done in the Dark, Must Come to the Light

The present-day stories of both issues center around truths coming out and Laura's inner monologue is working overtime. After finding out that Baal has been sacrificing children every four months to keep the Great Darkness at bay, Laura has to admit that she's pregnant to keep Baal from killing her to keep his secret. Unfortunately, the baby may be either Baal's or Baph's. Unsure of what to do and with Cass and the Norns being arrested, Laura returns to the underground to update Baph on everything (except her pregnancy). This infuriates Badb, who knocks out Persephone and forces Baphomet's hand. 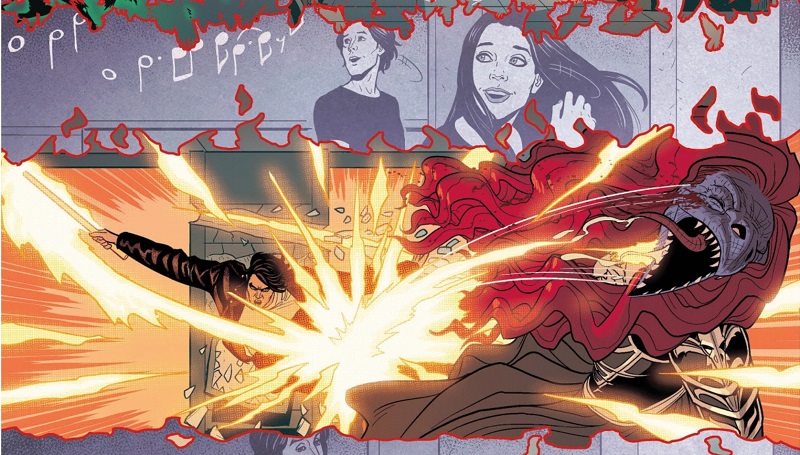 Again, the art here is amazing interspersingMatt Wilson's rich colors during the fight between Baph and Badb between desaturated scenes of Marian and Cameron meeting before they were gods. The innocence of these two young, hopeful teens meeting in a bar juxtaposed with an epic, blindingly beautiful fight between two gods, is masterfully rendered. The scene ends with Badb, now an enraged, crow-headed goddess, plucking out Baphomet's eyes and killing him. But her guilt overcomes her and The Morrigan takes over, giving her life to resurrect Baphomet. 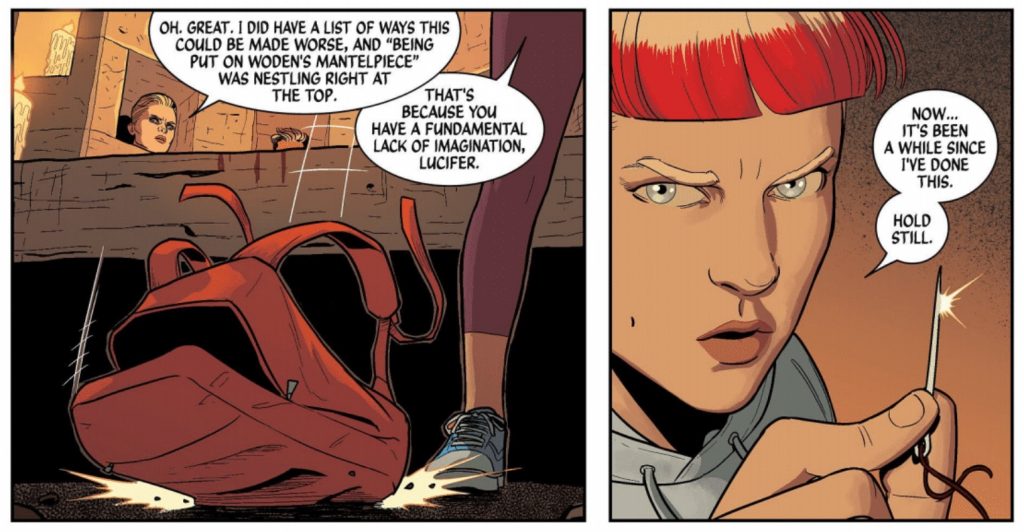 Meanwhile, Minananke is still trying to stay one step ahead (pun intended). She's returns to her lair where Lucifer, Tara and Inanna are each mocking, curious and desperate to know what's happening in the outside world. Minananke does admit that she thinks Woden will find them soon but she also pulls out an ominous looking needle and thread so who knows what she'll do to keep the heads quiet about her plans. I'm really interested to see how Baal reacts when he finds out his sweet Minerva has been hiding the head of his lover.

Shots in the Dark: 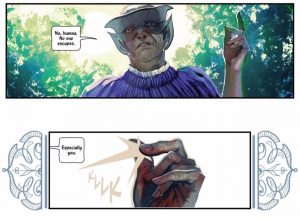