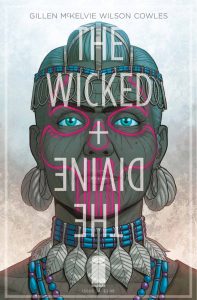 Usually, I don't write about Wicked + Divine because for me the comic has always been about introspection but as it enters its final phases, WicDiv is pulling its disparate threads together and bringing answers ... which inevitably leads to more questions and speculation. So now is the time to talk about what all this means.

It Has Happened Before ... It is Happening Again

Wicked + Divine is written by the brilliant Kieron Gillen (Young Avengers, Uber), beautifully drawn by Jamie McKelvie (Young Avengers, Suburban Glamour) and with Eisner Award winning Matt Wilson (The Mighty Thor, Black Cloud) on colors it's both compelling and visually stunning. The premise is simple, every 90 years, twelve gods are reborn in the bodies of humans. For two years, they live, they are worshipped and then they die. It has happened before and it is happening again.

The comic, which first released in June of 2014, has largely followed Laura, a god-worshipping fangirl, who wanted to become a god herself. The gods in this Recurrence are like rock stars and Laura wanted to the fame and celebrity they had. Now, Laura is the goddess Persephone, her family has been killed, she has killed Ananke, the seemingly immortal guide of the gods, and about half the gods are either dead or have become disembodied heads. I know. It's #wildt.

Forever Makes Liars of Us All 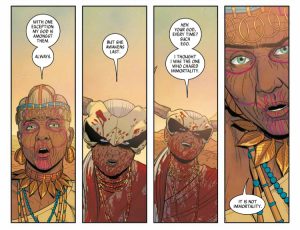 The latest issue, Wicked + Divine #34, kicks off the homestretch and immediately leads to more questions. We are taken back 6,000 years to the beginning of The Recurrence. An older woman who looks like an Aztec priestess is being helped along by her grandson. She tells him she can't go on and he needs to leave. Soon an almost identical woman appears with a bag of heads. The two of them talk morality and seem to be laying out the parameters of The Recurrence. Our old woman seems to come out on the bad end of the deal    but with an important caveat, that her god would always be amongst the gods reborn. Oh, and both women look like Ananke. 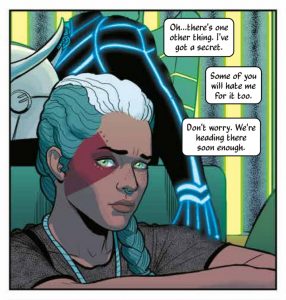 In the present day of the story (March of 2015), Laura/Persephone is trapped with Cass/The Norn and Jon/Mimir in a god's trap. They are being held by Woden who has been a pawn of Ananke since the beginning of the story. Laura/Persephone seems to be experiencing a lot of self-doubt for the first time in a long time. So much so that she looks up from the panel directly at the audience and lets us know she has a secret and we're not going to like her for it. But we don't have too much time to get into it because the other Norns show up to save them after some Destiny's Child jokes. The issue ends with Woden realizing what was hinted at with the end of the last arc, Ananke is still alive and inhabiting the body of the young god Minerva. But what is her plan?

There's so much I could speculate on but I want hope to make this a conversation. If you've been following WicDiv please let me know your thoughts and theories. You can find me on Twitter @shittybonmots or in the MTR Network group.

If you haven't been following WicDiv please correct that by using our Amazon link to purchase the trades or head to Comixology for digital copies. 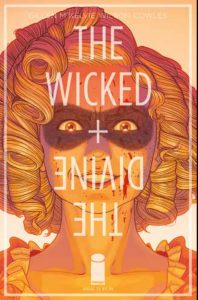