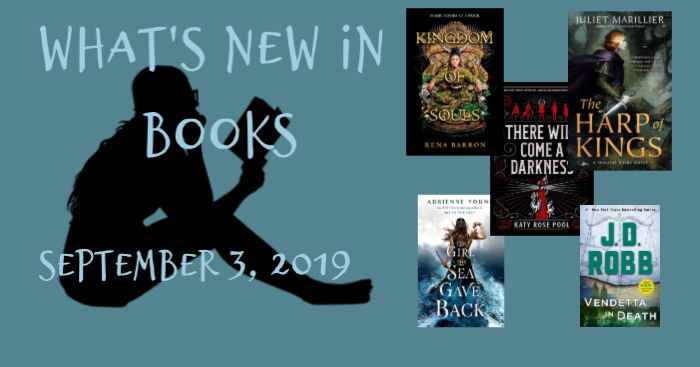 "Big book season" is officially here and it's a great time to see what's new in books. There's definitely something exciting on offer for every type of reader.  September 3rd new releases, particularly in sci-fi and fantasy, looks to be the start of good things for your fall reading list.

Given that my life revolves around an ever-growing book library, I thought's I'd share what's on my radar and soon to be on my reading list in the coming days. Consider this fair warning, because September's jam-packed with titles just itching to find their way on to some bookshelves.

Week one was a hit to the wallet because I bought almost everything on my watch-list in one go. I know, I have a problem...it's fine, really. But there are a few titles that definitely need to be on everyone's reading list for the year.

Given that I don't actually live in a library, there are some authors with long-running series that I switched over to e-book. They're also my first read since e-books download at 9 pm PT instead of midnight.

This time, mystery/thrillers filled my late-night reading-jones. Ann Cleeves and J.D. Robb are very different writers but both offer up intriguing mysteries worth the 1-click.

Official Synopsis: In North Devon, where two rivers converge and run into the sea, Detective Matthew Venn stands outside the church as his father’s funeral takes place. Once loved and cherished, the day Matthew left the strict evangelical community he grew up in, he lost his family too. Now, as he turns and walks away again, he receives a call from one of his team.

A body has been found on the beach nearby: a man with a tattoo of an albatross on his neck stabbed to death. The case calls Matthew back into the community he thought he had left behind, as deadly secrets hidden at its heart are revealed, and his past and present collide.

Quick Take: 20 years in, and Ann Cleeves's ready to introduce a new detective to fans. Told with plenty of dry wit and multilayered problem solving, The Long Call is a mid-paced mystery perfect for the reader who likes prodigal stories where the secrets unburied do more than just follow predictable patterns.

Official Synopsis: She calls herself Lady Justice. And once she has chosen a man as her target, she turns herself into a tall blonde or a curvaceous redhead, makes herself as alluring and seductive as possible to them. Once they are in her grasp, they are powerless. The first victim is wealthy businessman Nigel McEnroy. His company’s human resources department has already paid out settlements to a couple of his young victims—but they don’t know that his crimes go far beyond workplace harassment. Lady Justice knows. And in one shocking night of brutality, she makes him pay a much steeper price. Now Eve Dallas and her husband, Roarke, are combing through the evidence of McEnroy’s secret life. Meanwhile, Lady Justice’s criminal crusade is escalating rapidly, and if Eve can’t stop this vigilante, there’s no telling how much blood may be spilled.

Quick Take: This long-running series (this is book 49) just keeps gaining momentum and depth as Robb leverages great character development and world-building to craft this police procedural with a healthy dose of humor, heart, and themes that showcase its heroine Lt. Eve Dallas and her compatriots at their best. If you've never read an Eve Dallas thriller, this is absolutely NOT the place to start. But if you're an existing fan, this book has plenty of unique elements threaded through its familiar environment. Vendetta is a quick but thoroughly enjoyable read.

The book collector in me can't be contained. So, there are just some authors guaranteed to get my money for the hardback first edition, first printing of their work. In the coming days, there may just be more in-depth book reviews but for now, let me add to that to-be-read pile.

The first week of September was all about the YA releases. Don't expect that trend to end any time soon either. Some of the most dynamic writing on the market comes from this genre. The problem is, there's been such an uptick of books labeled YA, it's difficult to find something that may be to your taste. Here are a few standouts from my stack.

Official Synopsis: All they left behind was one final, secret prophecy, foretelling an Age of Darkness and the birth of a new Prophet who could be the world’s salvation . . . or the cause of its destruction. As chaos takes hold, five souls are set on a collision course:
A prince exiled from his kingdom.
A ruthless killer, known as the Pale Hand.
A once-faithful leader torn between his duty and his heart.
A reckless gambler with the power to find anything or anyone.
And a dying girl on the verge of giving up.
One of them―or all of them―could break the world. Will they be savior or destroyer?

Quick Take: The writing style is straightforward but full of vivid descriptions and great characters. The premise may be a YA staple but the delivery is anything but ordinary. Pool's leveraged loving ruthlessness, the ravages of war and the vagaries of religious fanatics into a dynamic story that starts out as a slow burn relying on shifting narratives to set the stage riddled with angst, grit and the fate of the world hanging in the balance...because who doesn't like that?  I received an ARC of this title in exchange for talking about the book honestly. I STILL bought a finished hardback as soon at it hit my local indie; so what does that tell you about how I felt about this story, hmmm? READ. THIS. BOOK.

Official Synopsis: For as long as she can remember, Tova has lived among the Svell, the people who found her washed ashore as a child and use her for her gift as a Truthtongue. Her own home and clan are long-faded memories, but the sacred symbols and staves inked over every inch of her skin mark her as one who can cast the rune stones and see into the future. She has found a fragile place among those who fear her, but when two clans to the east bury their age-old blood feud and join together as one, her world is dangerously close to collapse.

For the first time in generations, the leaders of the Svell are divided. Should they maintain peace or go to war with the allied clans to protect their newfound power? And when their chieftain looks to Tova to cast the stones, she sets into motion a series of events that will not only change the landscape of the mainland forever but will give her something she believed she could never have again—a home.

Quick Take: This standalone novel, written ten years after the action in Sky in the Deep, is beautifully written. There's a bit more emphasis on fighting and battle than love affairs (I do not consider that a bad thing) and the story takes some time to get moving but it brings forward an initially secondary character and builds a story worthy of returning to this universe.

What I'm reading next:

I love books that find a way to intertwine magic and music. I also can't seem to say no to a story where power obtained comes at great personal cost. So, The Harp of Kings and Kingdom of Souls both made my watchlist before I even finished reading the synopsis. Both look to be the beginning of interesting trilogies and neither shies away from letting things go dark, fast.

Official Synopsis: Eighteen-year-old Liobhan is a powerful singer and an expert whistle player. Her brother has a voice to melt the hardest heart, and a rare talent on the harp. But Liobhan's burning ambition is to join the elite warrior band on Swan Island. She and her brother train there to compete for places, and find themselves joining a mission while still candidates. Their unusual blend of skills makes them ideal for this particular job, which requires going undercover as traveling minstrels. For Swan Island trains both warriors and spies.

Their mission: to find and retrieve a precious harp, an ancient symbol of kingship, which has gone mysteriously missing. If the instrument is not played at the upcoming coronation, the candidate will not be accepted and the people could revolt. Faced with plotting courtiers and tight-lipped druids, an insightful storyteller, and a boorish Crown Prince, Liobhan soon realizes an Otherworld power may be meddling in the affairs of the kingdom. When ambition clashes with conscience, Liobhan must make a bold decision and is faced with a heartbreaking choice.

Official Synopsis: Born into a family of powerful witchdoctors, Arrah yearns for magic of her own. But each year she fails to call forth her ancestral powers, while her ambitious mother watches with growing disapproval.

There’s only one thing Arrah hasn’t tried, a deadly last resort: trading years of her own life for scraps of magic. Until the Kingdom’s children begin to disappear, and Arrah is desperate to find the culprit.

She uncovers something worse. The long-imprisoned Demon King is stirring. And if he rises, his hunger for souls will bring the world to its knees… unless Arrah pays the price for the magic to stop him.

If you like your fantasy built around unusual mythologies (Celtic-Galic inspired for Harp and West Africa inspired for Kingdom), and a main character with their back pushed to the wall either of these titles (if you're like me, both) may be just the thing to get to kick off your next reading obsession.

Unsure What to Read? Try The Mythic Dream Anthology

Official Synopsis: These are dreams of classic myths, bold reimaginings of the stories we tell about gods and kings, heroes who shaped nations, the why and how of the world.

Journey with us to the fields of Elysium and the Midwest, through labyrinths and the space between stars. Witness the birth of computerized deities and beasts that own the night. Experience eternal life through curses and biochemistry.

Quick Take: I bought this sight unseen after noticing that Naomi Novik contributed and realized these reimaginings were intriguing takes on some classics. A few of my personal favorites were penned by, Amal El-Mohtar, Kat Howard, Anne Leckie, and J.Y. Yang. Set aside time because these 18 short stories tales are captivating enough to keep you reading. The Mythic Dream does not disappoint.

*FTC Notice: There are books mentioned in this post that I gained access to ARCs for in exchange for an honest review. I can't be bought (not even with books) so my opinion is always my own because no one is the boss of me, except my mama.