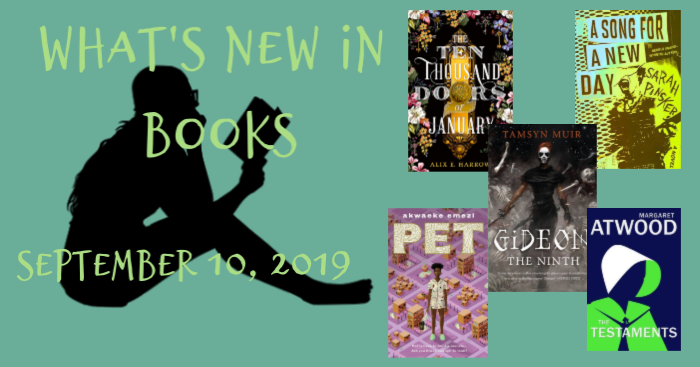 My must-read list for the second glorious "New Book Tuesday," was slightly shorter. But, my September 10th New Releases were just as highly anticipated. Well, at least I think so. And unlike last week, the stand-out titles fell in Sci-Fi/Fantasy and Horror much to my reading delight.

I freely admit I'm more of an Octavia Bulter girl than a Margaret Atwood devotee, but The Handmaid's Tale definitely had a hand in shaping both my world view and my understanding of dystopian literature. Plus, it's hard to pass up returning to the Republic of Gilead when the author herself promises book two arises from "everything you've ever asked me about Gilead and its inner workings...and the world we've been living in."

Official Synopsis: More than fifteen years after the events of The Handmaid’s Tale, the theocratic regime of the Republic of Gilead maintains its grip on power, but there are signs it is beginning to rot from within. At this crucial moment, the lives of three radically different women converge, with potentially explosive results.

Two have grown up as part of the first generation to come of age in the new order. The testimonies of these two young women are joined by a third voice: a woman who wields power through the ruthless accumulation and deployment of secrets.

As Atwood unfolds The Testaments, she opens up the innermost workings of Gilead as each woman is forced to come to terms with who she is, and how far she will go for what she believes.

Official Synopsis: In the Before, when the government didn't prohibit large public gatherings, Luce Cannon was on top of the world. One of her songs had just taken off and she was on her way to becoming a star. Now, in the After, terror attacks and deadly viruses have led the government to ban concerts, and Luce's connection to the world--her music, her purpose--is closed off forever. She does what she has to do: she performs in illegal concerts to a small but passionate community, always evading the law.

Rosemary Laws barely remembers the Before times. She spends her days in Hoodspace, helping customers order all of their goods online for drone delivery--no physical contact with humans needed. By lucky chance, she finds a new job and a new calling: discover amazing musicians and bring their concerts to everyone via virtual reality. The only catch is that she'll have to do something she's never done before and go out in public. Find the illegal concerts and bring musicians into the limelight they deserve. But when she sees how the world could actually be, that won’t be enough.

Quick Take: Pinsker's near-future world without music is vibrant and grounded. It's the perfect backdrop for a gripping story that's also a touch too relatable in today's cultural environment.  The characters move through a world that feels vivid and real. The author's use of music and concert environments to develop emotionally and illustrate connection (or lack thereof) unfold naturally and keep the story moving without feeling forced or inauthentic. This world has depth, this storyline beautifully developed and told from the POV of two queer women. The relationships are divinely complicated. A Song For a New Day plays with themes in the sci-fi future not often contemplated from this contextual perspective.

Official Synopsis: In a sprawling mansion filled with peculiar treasures, January Scaller is a curiosity herself. As the ward of the wealthy Mr. Locke, she feels little different from the artifacts that decorate the halls: carefully maintained, largely ignored, and utterly out of place.

Then she finds a strange book. A book that carries the scent of other worlds, and tells a tale of secret doors, of love, adventure and danger. Each page turn reveals impossible truths about the world and January discovers a story increasingly entwined with her own.

Quick Take: Regardless of the type of fantasy you like, you'll find yourself invested in Ten Thousand Doors. There are magical portals to fantastical places described brilliantly. It's a tale of self-discovery presented through incredibly descriptive language that lures you in but keeps the story moving. There are brutal choices, astonishing discoveries, loyalty, family ties, and magic for days. It's likely I have a more in-depth review coming because, for me, this fantasy writing is damn close to perfect.

Official Synopsis: The Emperor needs necromancers. The Ninth Necromancer needs a swordswoman. Gideon has a sword, some dirty magazines, and no more time for undead bullshit. Brought up by unfriendly, ossifying nuns, ancient retainers, and countless skeletons, Gideon is ready to abandon a life of servitude and an afterlife as a reanimated corpse. She packs up her sword, her shoes, and her dirty magazines, and prepares to launch her daring escape. But her childhood nemesis won't set her free without a service.

Harrowhark Nonagesimus, Reverend Daughter of the Ninth House and bone witch extraordinaire, has been summoned into action. The Emperor has invited the heirs to each of his loyal Houses to a deadly trial of wits and skill. If Harrowhark succeeds she will become an immortal, all-powerful servant of the Resurrection, but no necromancer can ascend without their cavalier. Without Gideon's sword, Harrow will fail, and the Ninth House will die. Of course, some things are better left dead.

Quick Take: I don't really know how to talk about a book that describes itself as "a solar system of swordplay, cut-throat politics, and lesbian necromancers." But what I can say is, this book is a slow burn with dense worldbuilding, complex characters, irreverence and twists worth EVERY. SINGLE. BIT. of the work, it'll make you do to dig in and figure out what in the battle-fuck is going on. By the end, I was never happier to know it's the beginning of at least a trilogy more in my damn life. Gideon the Nigth is one you'll either like or hate. There won't be any middle ground. If you don't like it, expect me to side-eye you...a lot. This is one of the best things I've read so far this year. PERIODT.

What I'm Excited About Buying Next

A story confronting themes built around willful blindness and the living breathing obstacle choosing that path is to real redemption, change, healthy familial relationships and the betterment of a community. All promising to be skillfully written into a unique world created by an author of color with SERIOUS writing chops?

Official Synopsis: There are no more monsters anymore, or so the children in the city of Lucille are taught. With doting parents and a best friend named Redemption, Jam has grown up with this lesson all her life. But when she meets Pet, a creature made of horns and colours and claws, who emerges from one of her mother's paintings and a drop of Jam's blood, she must reconsider what she's been told.

Pet has come to hunt a monster, and the shadow of something grim lurks in Redemption's house. Jam must fight not only to protect her best friend, but also to uncover the truth, and the answer to the question: how do you save the world from monsters if no one will admit they exist?

*FTC Notice: There are books mentioned in this post that I gained access to ARCs for in exchange for an honest review. I can't be bought (not even with books) so my opinion is always my own because no one is the boss of me, except my mama.