Welcome to the Blumhouse’s Evil Eye 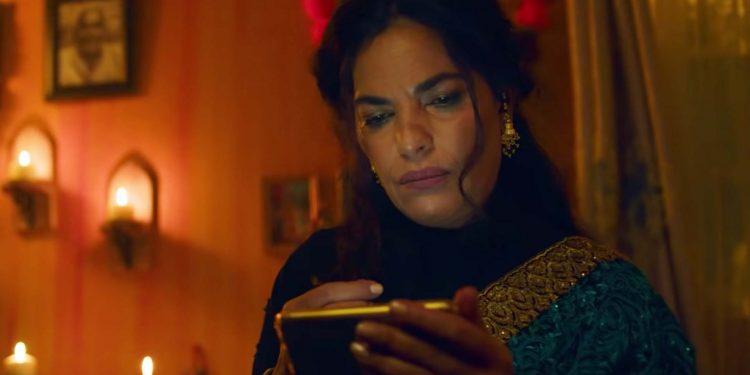 Welcome to the Blumhouse’s Evil Eye had the potential to be a good film but poor pacing and a refusal to dive into the cultural lore elements of the story make it completely unsatisfying. The feeling of being unsatisfied is the most disappointing thing about Evil Eye because the potential is clearly there.
The general plot is this: A superstitious Indian mother is determined to find her daughter living in America a good Indian man to marry. When her daughter ends up meeting someone, the mother begins to think that something is off with the man. She begins to suspect that maybe he’s the reincarnation of the abusive boyfriend she escaped 3 decades before.
Where Evil Eye excels is the cast. Sarita Choudhury has the perfect screen presence for maternal figure Usha. The chemistry between her and Sunita Mani who plays her daughter Pallavi. Throw in Omar Maskati as Sandeep and there’s a core cast here that is the only thing keeping this movie watchable.
Unfortunately outside of the cast, everything else about Evil Eye is lacking. The first problem is while the film is called “Evil Eye” and there are parts of the opening credits that explain the cultural significance, the film itself does nothing to explain it to the viewer. A lot of what is driving Usha is her superstitions and beliefs but the film never really dives into those. It very similar to the problem a film from earlier this year, The Wretched, had. If the core of the plot revolves around superstition and the supernatural, that needs to be explained and laid out for the audience. Instead, Evil Eye only skirts around the surface and in doing so makes Usha seem more like an overbearing and overprotective and intrusive mother than someone who is loving and caring.
The lack of explanation and investigation into the cultural side of Evil Eye leads to the other problems. As mentioned before, because Usha’s beliefs and the evil eye aren’t really explained, her behavior comes off less of a concerned mother and that of a very overprotective, even intrusive one. That makes the ending of the film even more frustrating because in many ways her bad behavior is rewarded. It also doesn’t help that the story of her previous abuse is disjointed and barely explained. Not suggesting that we needed to see a young Usha getting beaten but at the very least seeing some of the more subtle warning signs that Usha is seeing in Sandeep to show the through line. Just something to keep the film coherent. Instead we get a long drawn out hour and ten minutes followed by an incoherent and clearly rushed final 20 minutes. So much wasted potential.
Below you can listen to Kriss and Ro go into more spoiler details about Evil Eye. Evil Eye is available now on Amazon Prime Video.