Well that was sooner than expected.  I just posted a few hours ago about Suicide Squad starting production in February and filming in April.  It was also revealed that the major cast members were in final negotiations.  I predicted we'd get an official announcement soon but I didn't know...a few hours later sooner.  Well, here is the casting (Source): 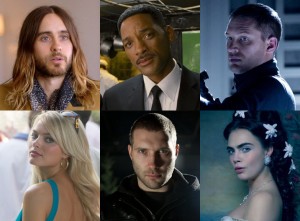 Now that's one hell of a squad.  I know everyone is excited that Jared Leto and Margot Robbie are officially confirmed now for Joker and Harley but can we talk about Will Smith as Deadshot?  Man listen, I know he's always controversial when cast but I don't know of a movie where Will Smith didn't act his ass off in.  The movie might have been bad, but Will Smith is always solid.  Matter of fact, when the rumors were first swirling about the cast of Suicide Squad, I wrote off the idea of Will Smith because honestly, I just thought he was too good for that.  But I'm not mad at all and in fact I'm excited that he accepted.  I think Smith will be great for Deadshot.  Also good to see Tom Hardy back in a DC movie.

Also if you're not a fan of skinny Amanda Waller, you might be getting your wish with this film:

The studio’s shortlist of actresses being eyed for the role includes Viola Davis, Octavia Spencer and Oprah Winfrey, whom sources say would be WB’s first choice for the part.

Man, I'm excited for this film.