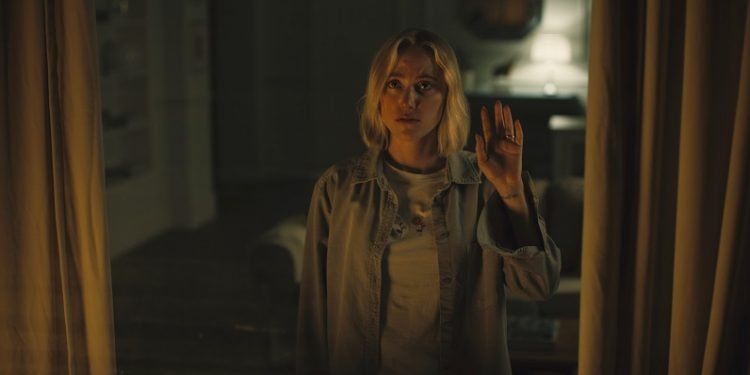 SXSW Synopsis: set in the midst of a citywide panic over an active serial killer, a young woman moves into a new apartment with her partner and is tormented by the feeling that she is being stalked by an unseen watcher in an adjacent building. (This review was originally part of MTR’s 2022 festival coverage.)

Watcher, director Chloe Okuno’s feature debut, follows Julia (Maika Monroe) and Francis (Karl Glusman), a young couple just arrived in Bucharest, Romania for Francis’ new job. Julia doesn’t speak Romanian or know the country. Almost immediately, she finds herself adrift in the city with an increasingly unavailable husband. She spends most days listening to language lessons and otherwise wandering around at loose ends. Francis does little to help his wife adjust. He’s quick to speak in Romanian, cutting her out of conversations by often failing to translate. He makes no attempt to orient her in the city or their new lives. The first night in their home, she notices the silhouette of a man standing at a window in the building across from theirs. He appears to be looking at her. Days later, in an attempt to convince herself she’s imagining things, Julia waves when she sees him. The man raises a hand and waves back.

If this setup has a decidedly Hitchcockian feel, have no fear you’re not imagining it. The hints of voyeurism and Rear Window vibes echo thematically throughout the film. There’s even a very meta moment early on where Julia can’t shake the feeling of being stalked inside a theater while watching Stanley Donen's Charade. Okuno plays with visual perspectives with overhead shots, shots from below, and three-quarter angles to build an ever growing specter of doubt in what Julia’s actually experiencing. Her approach invites the audience to transfer their own anxieties and fears onto the main character. It’s not unique but unlike its predecessor films in the genre (think Hereditary or Repulsion), Okuno uses Julia’s seeming aimlessness to credibly make room for doubt without completely leaving the character as an empty cipher. In Monroe's capable hands, Julia’s got depth in her distressed gaze.  Her growing listlessness and lack of focus aid in distorting time and recollection.

Paranoia is self-replenishing. Once something trips that switch, it's like a constant itch at the base of your skull; a twitch between your shoulder blades. If the feeling lingers long  enough, you can find yourself practically jumping at shadows, flinching away from people, and avoiding places where you can’t put your back to a wall. Thread that paranoia into a story centering a woman convinced she’s being watched (and possibly followed) who can’t get anyone to take her seriously and you’ve got the perfect nightmare fuel.

As Julia’s sense of being followed increases, Francis begins to fully discount her unsettled feelings, casting her further adrift. It doesn’t help that there’s an actual serial killer, called the Spider, preying on women in the city. Pretty soon, she’s sleeping poorly and coming off as a blurry eyed hysteric to the people around her. So when her only friend, Irina (Madalina Anea), goes missing from the building; no one’s willing to take her seriously. Whenever she tries to articulate what she’s feeling, it comes out sounding hesitant and unconvincing. To others, the situation begins to look more and more like an unhinged American woman targeting a solitary local man. Monroe’s performance convincingly pushes you into questioning her reliability as a narrator. As incidents and inexplicable encounters keep happening even Julia begins to doubt herself. But if you, like me, automatically say, “oh no” whenever you see Burn Gorman’s name on a cast list; then you know, Julia should definitely trust her gut.

Watcher exists in a chilly landscape that vacillates between grey-washed outdoor scenes, warmly lit - but almost always emotion-grinding - indoor settings and night sequences with a startling clarity and mix of the two color wheels. Its soundscape a perfect balance of silence and the everyday noises we take for granted. Shoes dropping on the floor, keys jangling, or sounds heard through a shared apartment wall. There’s an irony to the fact her character winds up in potentially life-threatening peril because she’s a bit of a voyeur herself. Only hers is driven by the wistfulness and curiosity of  a stranger in a strange land. Julia accidentally put herself on radar by noticing something no one else has. And her decision to say something rather than simply close her curtains is dangerous. She unwittingly enters a life-shattering game of cat and mouse.

The term gaslighting gets thrown around with ease these days. Its meaning, diluted. But Okuno’s giving a master’s class in what exactly being gaslit means. Whether Julia’s actually just suffering from a combination of loneliness and despair or her fears are founded; the slowly building tension thrives in this meticulously designed environment. And against this backdrop of perfectly arranged furniture, stylishly coiffed people, and polite dinner parties Watcher also exposes the subtle erosion and self-delusion that's part and parcel to gaslighting someone. Francis’ inability to understand what’s happening with his wife turns into bitter exhaustion and demands that she snap out of it. There’s a component to gaslighting that requires the other party to ignore things they know about the subject in order to push them to see things their way. As her husband, Francis should know better than anyone that Julia isn’t just deteriorating because of some life changes. But he convinces himself it can’t be anything else to excuse being so absent. It has to be her fault. This juxtaposition between Julia's increasing discomfort and Francis’ step-removed rationality creates a space where fear takes on many layers made of isolation, disorientation, dismissal, and emotional abandonment. The relationship between the watched and the wachter is a delicate, albeit brutal, dance. It leaves room for nothing else. And once seen, neither party can go back.

Watcher is a slow burn. But it's a character-driven narrative with both a captivating premise and lead. Maika Monroe (It Follows) brings an almost tangible vulnerability to what could easily be a clichéd paper-thin character. Her emotional collapse is believable and skillfully drawn out. And herein lies the beauty in this twisted story. There’s absolutely nothing existential about the mounting dread in the third act as it leads to a starkly poetic climax.