The Warner Bros. panel opened up the morning in Hall H with a presentation that blew fans away. Amid gasps, the curtains pulled back around the room to reveal with stills and a video supercut of the best of WB footage from Harry Potter to Man of Steel. 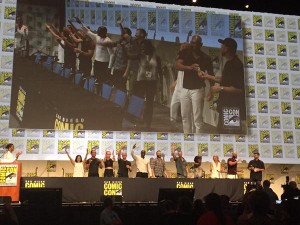 Host Aisha Tyler (Archer) quickly moved through presentations of The Man From U.N.C.L.E., Pan, Suicide Squad, and Batman v Superman. The short presentations included teaser footage, conversations with the directors and actors and questions from the audience. They showed concept art for the forthcoming DC Films including Aquaman, Cyborg, Green Lantern Corps, and The Flash.  Suicide Squad was the biggest surprise of the day with director David Ayer showing a polished trailer featuring Viola Davis' Amanda Waller setting up the Suicide Squad premise and finishing with a intense look at Jared Leto's Joker in all his maniacal glory. Then the entire cast flew out from Toronto and came out to raucous applause.
Henry Cavill appeared twice on stage for   U.N.C.L.E. and Batman v Superman. The U.N.C.L.E. trailer was mod and stylish and showcased a very Bourne Identity like fighting style. It was very different from the over the top heightened action of Batman v Superman. Also on hand were the director and cast members from Pan including Joe Wright and Hugh Jackman. The highly imaginative film promises to be a delightful visual experience and the Comic Con audience was treated to footage of Jackman as Blackbeard, who he described as being both frightening and ridiculous. 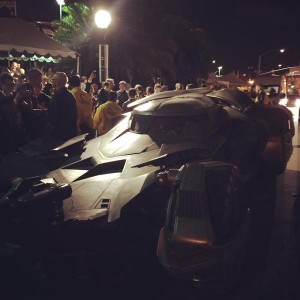 Zach Snyder (Man of Steel) brought the Batmobile to the Hall H line late Friday night/early Saturday morning as a warmup for what he had planned for the 6500 fans packed into Hall H.  And that was just the beginning.  In the morning, he pulled out the big guns. Bringing his star studded cast including Ben Affleck, Henry Cavill, Amy Adams, Jeremy Irons, Gal Gadot, Jesse Eisenberg and Holly Hunter into Hall H had the fans going crazy at the finale of Warner Bros' panel.
The trailer brought a whole host of reveals including a graying Bruce Wayne (Ben Affleck) watching a Wayne Enterprise building fall in Metropolis, apparently during the fight between Zod & Superman in Man of Steel, a manipulative Lex Luthor (Jesse Eisenberg) pitting our superheroes against each other and Ma Kent (Diane Lane) letting Clark know he doesn't owe this planet anything. The appearance of Wonder Woman (Gal Gadot) in her costume elicited a huge roar from the crowd and there was a glimpse of Clark Kent's biggest enemy ... kryptonite. 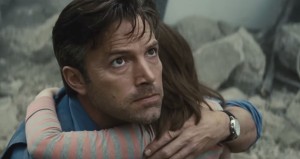 During the panel Snyder talked about taking the common comic book trope of "who would win in a fight?" and creating his own story. One major thing he added was putting Metropolis closer to Gotham and making them sister cities almost like Oakland and San Francisco. This may be why Batman has a bit of a bone to pick with Superman who tore up Metropolis in Man of Steel. The stars all talked about taking these iconic characters and making them their own and hopefully bringing something fresh to the fans. Affleck did throw in some advice he received from Christian Bale, "Make sure you can piss in that suit".
They closed out the panel with one more viewing of the new trailer and finished the WB presentation with a very impressed Hall H crowd.