Vengeance Review: A Dark Comedy That Hits Its Mark 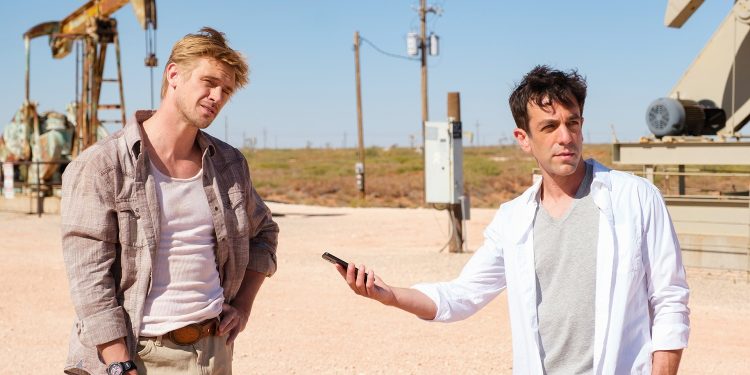 Ro8.5
Kriss8.5
Vengeance is a savvy dark comedy taking aim at societal arrogance in a story about ambition, empathy, and missed connections.
8.5

Vengeance follows journalist Ben Manalowitz (B.J. Novak), a self-indulgent writer for the New Yorker, desperate to find an angle that'll let him successfully pivot into podcasting. After a late night call leads him to Texas, and the funeral of Abby Shaw (Loi Tipton) a past hook-up, Ben allows himself to get roped into investigating her death - by her distraught brother Ty (Boyd Holbrook) - in the hopes he can mold the experience into a true-crime show. As writer, director, and star, B. J. Novack leads an eclectic ensemble in surprisingly entertaining a dark comedy with a finely honed satirical edge.

The movie's cold opening almost guarantees you won't like Ben. His personality's mostly just vibes and pretentious assumptions. He's never bothered to learn how to be his authentic self. When people try to point out that his detachment holds him back, it goes in one ear, and out the other. So, once he's out of comfort zone, Ben doesn't know how to relate. And his belief that it's everyone else who's out of step leads to hilarious smack downs, rude awakenings, and emotional life lessons. Thankfully, Novack does more than just take potshots at the obsessively ambitious and emotionally disengaged. He's crafted a constantly engaging narrative to mix with his metaphors. Vengeance is both a fish-out-of-water comedy and an intriguing mystery. Along the way, you'll laugh, cringe, and wonder how many times he can miss seeing what's right in front of him.

By turning the true-crime angle into the framing device Novack creates a way to naturally take his lead's worldview with a grain of salt. From the outset, he shapes each character's arc to simultaneously embody and combat people's preconceived notions about one another. Just as soon as you think you know what someone thinks or how they'll behave, Novack throws a curveball. Every passing encounter designed to pull the picture slowly (but not too slowly) into focus. There's never a moment when the cast can phone it in. The film's quips, slick dialogue and surprisingly impactful monologue showcases how the impulse to treat people as caricatures results in squandered moments to connect with one another on a real level.

In a time where it's commonplace to listen with half an ear and keep both eyes trained on a phone, Vengeance pushes its main character onto a path that demands his whole attention.  B. J. Novack makes his directorial debut in full creative control and taking some big swings. Don't be surprised if between the laughs, you end up doing some serious self-refection before all's said and done.

Listen as Ro and Kriss review Vengeance and discuss why its off-kilter story and tight ensemble performances hit just the right note.