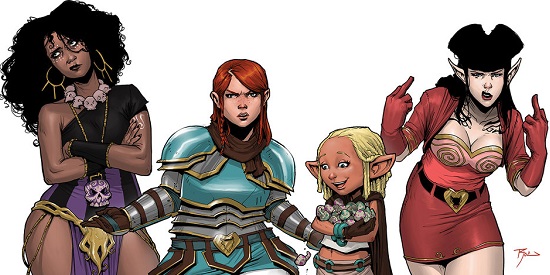 Last fall I started the MTR Comic Book Book Club as a way to read more comics myself and to get more people reading as well.  It turned out better than I had imagined.  We had some really good discussions (and debates).  I really enjoyed our Saga discussions in particular.  I want to thank everyone who participated in those panels and everyone who listened and joined in the chats.

2015 is going to be even better.  I've made some changes with the logistics of the show.  We won't be limiting ourselves to just 6 issues and what I will do is try to pick a reasonable number of  issues for us to cover. Also sometimes this number will change after talking to the members on the panel.  For instance, the next CBBC will cover Astonishing X-Men and at first I was just going to do the next 2 volumes but most of the members were interested in reading all the way to the end so I changed it up.

So without further ado here are the Books I'm looking at for the next few months.  Don't worry, there will be plenty others because I expect to do a lot of CBBC's this year.  I'm going to try to stick to a "every 2 weeks" schedule but there might be some that I do every week.  Also the order right now is only tentative as are the issues that we'll be reading (as I said above, I might include more issues for a book than the ones listed).  As always if you're interested in joining the panels shoot me an email at CBBC@MovieTrailerReviews.net.  The only panels I'm NOT accepting new people for are Astonishing X-Men and New Avengers as those panels are pretty full already and I don't want to  have too many people on because that will hamper the discussion.  I've marked comics that you can get on Marvel Unlimited with a *.  Not those panels fill up the fastest since for $10 a month, it's the easiest and cheapest way to get into reading along.


We started this series already and we'll be finishing it up.  This means Volume 2 (Dangerous), Volume 3 (Torn) and Volume 4 (Unstoppable) as well as the Giant Size Astonishing X-Men #1.  This series is on Marvel Unlimited and will be issues 7-24 plus the Giant Size.  If you decide to buy the TPBs, Volume 4 does include the Giant Size. 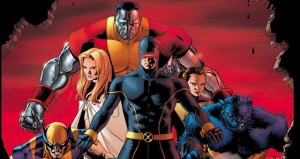 This was the first panel I did where I wish I did multiple volumes instead of just one.  So to correct that we're going to do the next 2 volumes of Fables.  Volume 2 is called "Animal Farm" and it is issues 6-10: 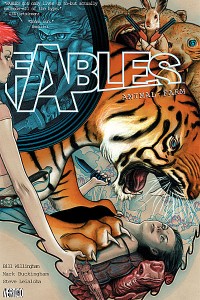 Travel to upstate New York, where the non-human Fable characters have found refuge on a farm, miles from mankind. But all is not well on the farm — and a conspiracy to free them from the shackles of their perceived imprisonment may lead to a war that could wrest control of the Fables community away from Snow White. Starring Goldilocks and the Three Bears 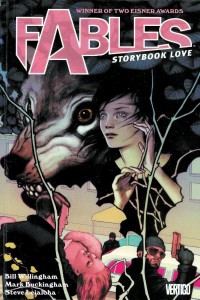 In Storybook Love, Bigby and Snow have been stranded as part of a scheme of Bluebeard's. Plus, the one shot of "Bag O'Bones" about Jack Horner, plus a two-part caper and a one shot about Smalltown.

We're back with more New Avengers and this time I figured we can do three volumes of this instead of just one.  First up, Infinity which is issues 7 -12 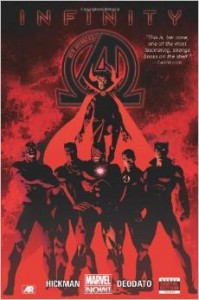 Who is the secret member of the Illuminati that many of the members don't know about? And how does Black Bolt, mute monarch of the Inhumans, lie to his teammates? As the cold war between Wakanda and Atlantis heats up into a full-scale conflict, casualties begin to pile up - and an Illuminati member is forced to make a hard choice. But when an Inhuman learns of the Illuminati's plans, everything falls apart. And as Thanos' forces invade Earth, the Illuminati take to the front lines - and the House of Black Bolt cracks! How is Maximus the Mad involved, and what secret desires does Thanos harbor? As the battle for Earth continues, the Builders arrive - what an awful time for the Illuminati to face another incursion! 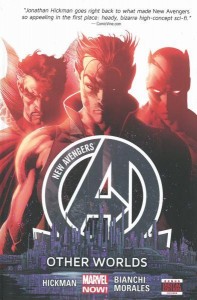 Inhumanity has begun! With the consequences of Infinity fresh on their minds, tough decisions are made. As a new and different Illuminati gathers, learn more about the other beings related to the Incursions...and discover the startling secret of the Black Swan! Then: meet the Mapmakers, cartographers of the Apocalypse. And as Reed Richards and the Illuminati rekindle an old relationship, Doctor Strange sells his soul! 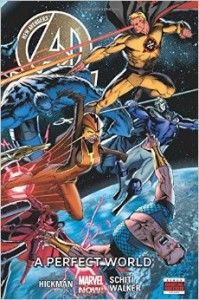 In all creation, only one Earth has successfully met and triumphed over each Incursion that has threatened it: the Earth of the heroes of the Great Society! And guess which Earth is on a collision course with ours? Now, the New Avengers must take on the combined power of the Great Society, and only one parallel Earth can survive! But how far is Dr. Strange willing to go to protect the Marvel Universe? Which New Avenger will find the strength to press the button that destroys a world? And what will come in the aftermath? It's the battle you didn't know you wanted to see! And as the Illuminati shatters under the weight of an exploding planet, follow the broken would-be world-savers through their last day on Earth.

Batman : City of Owls & Death of the Family

Batman was another weird one where the end of the first volume left us wanting more so I'm going to include the next two volume for Batman. 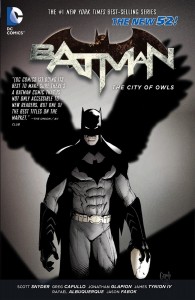 "NIGHT OF THE OWLS" continues here! Batman must stop the TALONS that have breeched the Batcave in order to save an innocent life ... and Gotham City! In the backup story, learn more about the PENNYWORTH family and the secrets they've kept from the Wayne family! Collects BATMAN #8-12 and BATMAN ANNUAL #1. 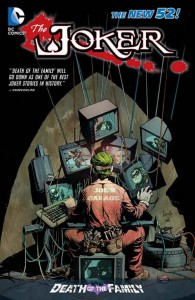 After having his face sliced off one year ago, the Joker makes his horrifying return to Gotham City! But even for man who's committed a lifetime of murder, he's more dangerous than ever before. How can Batman protect his city and those he's closest to? It all leads back to Arkham Asylum... This volume collects the critically acclaimed tale DEATH OF THE FAMILY from the superstar #1 New York Times best-selling team of writer Scott Snyder and artist Greg Capullo. BATMAN VOLUME 3 will have repercussions that will affect the Batman universe for years to come! Collects BATMAN #13-17

So now we're moving into some books we haven't discussed before and this first one is one I'm really excited for.  Shoutout to Dpalm for getting me to read this.  The entire run of Secret Warriors is 28 issues and there are some side issues.  So I'm going to do the first 3 volumes of Secret Warriors.  If you listen to our Agent of SHIELD reviews now you can now see why we're all so excited about Daisy Johnson.

Volume 1 - Nick Fury, Agent of Nothing 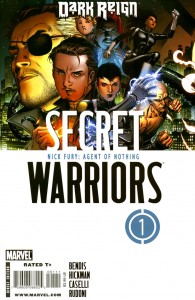 Exploding out of the pages of Secret Invasion and Mighty Avengers! Nick Fury and his new band of young heroes uncover the darkest secret in the history of the Marvel Universe! A secret that sends the Secret Warriors tumbling into an underworld of rogue S.H.I.E.L.D. agents, super-powered spies, and global criminal organizations. Collects Secret Warriors #1-6, and Dark Reign New Nation story. 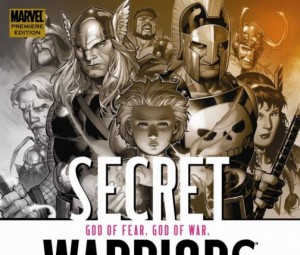 Baron Strucker and Norman Osborn team up to drive out the Marvel Universe's ultimate covert superteam. It's wall-to-wall insanity as the Dark Avengers and the Thunderbolts go after the Secret Warriors. It's time for Ares to get his son back! GOD OF FEAR, GOD OF WAR! Collects Secret Warriors #7-10, and Dark Reign: The List - Secret Warriors. 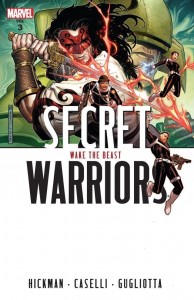 Nick Fury quietly moves his forces into place as the war between the armies of LEVIATHAN and the armies of HYDRA kicks into gear. Also, the long-awaited origin of the mysterious HIVE, and we finally find out who the father of STONEWALL is. Collects Secret Warriors #11-15.

Since we caught all the way up on Saga, we won't be able to revisit that for a while.  So I've heard good things about Rat Queens so I'm adding it to our list.  I don't know how many issues we'll do right now so just stay tuned for now 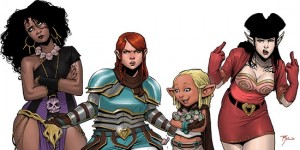 The titular "Rat Queens" are a rambunctious party of adventurers in a medieval fantasy setting. They comprise the rockabilly elven mage Hannah, the hipster dwarven warrior Violet who shaved her beard before it became cool, the atheist human cleric Dee who hails from a family of Lovecraftian monster cultists, and the hippy halfling thief Betty, whose idea of a hearty meal is a bag of drugs and candy.

I've had a lot of suggestions about books to read for DC and a lot of them center around Batman so I wanted something else and I figured Wonder Woman would be a good choice since we will be getting her in movies soon. 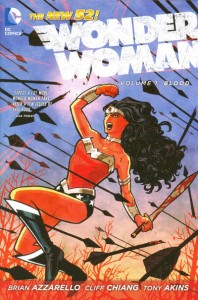 Hippolyta, queen of the Amazons, has kept a secret from her daughter all her life–and when Wonder Woman learns who her father is, her life will shatter like brittle clay. The only one more shocked than Diana by this revelation? Bloodthirsty Hera–so why is her sinister daughter, Strife, so eager for the truth to be told? Superstar writer Brian Azzarello creates a new direction for one of DC's best-known heroes, with spectacular art by Cliff Chiang and Tony Akins! 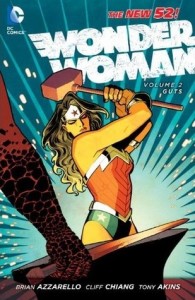 Wonder Woman goes to hell! After playing Poseidon, Hades, and Hera against each other, Hades strikes back by kidnapping Zola and trapping her in the Underworld. It's up to Wonder Woman--with a little help from the God of Love and the God of Smiths--to break Zola out. But what is Hades' real game, and once you get into the land of the dead, how exactly do you get out? 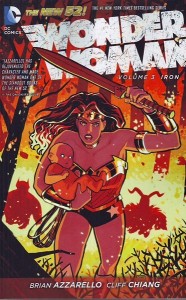 Wonder Woman has finally discovered her heritage, as well as all the family that comes along with it. However, as she digs deeper into her familial tree, there's as many Gods that are willing to lend her a hand as there are those that would do her harm. WW continues on her search for her friend Zola's baby, not knowing who she can trust. So when she discovers New God Orion at her doorstep, is he here to help her--or destroy her?

Storm getting her own book was the reason why I wanted to start the Comic Book Book Club and even though I've heard mix reactions to the comic, I still want to check it out.  The number of issues we do will be determined by when we actually do the panel and how many issues have been released by then 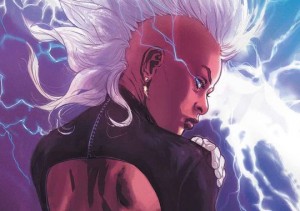 So that's the list so far.  Don't worry if you don't a book I've talked about before.  While this list seems long this only gets us a few months into 2015 so there will be plenty more.  Again if you want in on any of these panels (aside from Astonishing X-Men or New Avengers) send me an email at CBBC@MovieTrailerReviews.net.  Be on the lookout for announcements on when each panel will be.