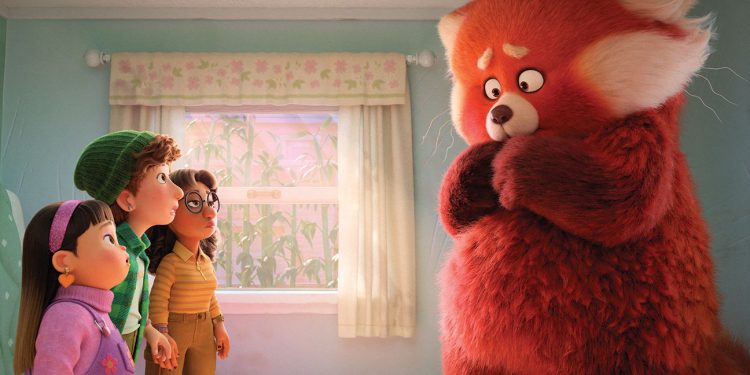 Turning Red centers thirteen-year-old Meilin (Rosalie Chiang) as she enters that in-between phase mother's insist on calling a "magical" time in a young girl's life, puberty. On one level, its an in-your-face allegory: Preteen wakes the morning after her first bout of raging hormones as a giant red panda. Tripping around to hide her shapeshift convinces her mom Ming, voiced by Sandra Oh, that she's gotten her first period. Cue hilarity, hijinks, and those horribly embarrassing moments that can break a mother-daughter bond if not handled just right.

Shi's animation background ensures that Turning Red doesn't miss a trick. There's movement, action and important clues in every frame. Mei and her friends are smartly drawn and highly relatable. The story direction and character design keep things accessible for young viewers while still swinging for the emotional fences. There's vibrant color, and a pace-setting soundtrack that make for an engaging and enjoyable experience. The best part? The magical and the mundane are so intertwined a vivid picture of a family deeply connected to their personal history, culture, and one another unfolds in ways that makes the most of common experiences that play crucial part in growing up.

Mei's inner panda is part of a larger legacy that marks a true rite of passage for the women in her mother's family. In the midst of navigating school, learning to control her panda while and conniving to spend time with her friends, Mei finds a way to live her best life; but must pull away from her mother (and her expectations) to do it. And here's where Turning Red builds the quiet parts of this coming-of-age story into one revolving around generational knowledge, matrilineal power, womanhood, and choice. So on another, more subtle, level this semi-autobiographical story offers up more nuanced lessons about honoring family by choosing to honor yourself. Of course, those lessons come with a side of boy band mania and secret fundraising but that just means the jokes and laughs are plentiful.

Thankfully, Turning Red, never forgets that the hard part of growing up is holding on to family without sacrificing yourself to do it. It's not just a primer for guiding a young girl through the emotional highs and lows of puberty. Pixar's tapped into what worked so well in Inside Out by letting director Domee Shi turns a Chinese Canadian girl's discovering she can turn into a giant red panda into a touching tale about legacy, friendship, and learning to love everything that makes you, you with charm, wit and a heavy dose of middle-school earnestness.

Listen as Kriss and Ro get into the themes and reasons this beautifully crafted coming of age story is certain to resonate with the entire family.

Turning Red premieres in select theaters and on Disney+ March 11, 2022