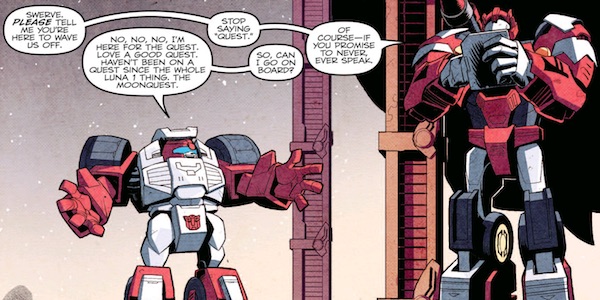 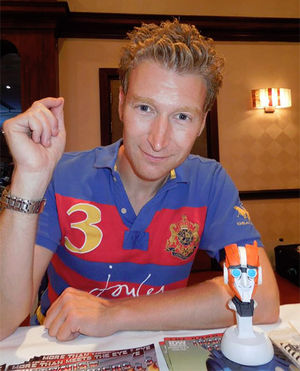 Join Kriss and Dpalm as they ring in the new year with Movie Trailer Reviews's first interview of 2016. The MTR crew sat down with the writer of IDW's Transformers More Than Meets The Eye, James Roberts. Roberts was recently named Comic Alliance's Outstanding Writer of 2015. We talk about the transition from fan to writer, the unique perspective of writing a licensed comic, and welcoming new readers to a 30 year old franchise. Of course, we talk about the book itself as the series nears its landmark 50th issue.

Here is a sample of what we talked about:

On why More Than Meets The Eye can be a good book for new readers: 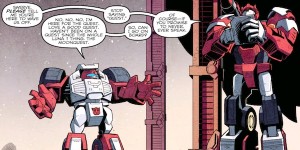 There was a decision to, I guess you can call it a soft reboot, sort of definitively move the IDW books into a second phase and the foundation for that was going to be the end of the war. That’s as good of a fresh start as you can have without starting from the very beginning and doing a proper reboot. So with John Barber with Robots in Disguise and myself with More Than Meets the Eye, two new books, two new on-goings, [there’s] a very simple pitch to the uninitiated which is: You know about the Autobot and Decepticons. Beyond that you know that they’ve been age old enemies. Well that stopped, there’s an uneasy peace…start reading now and let’s see where it goes. And that’s compounded by the fact that MTMTE is a good ole quest book. Its age old trope stuff. A group of mismatched people, you don’t need to know who they are, they’re on a ship and they’re flying into adventures. So that’s your background. MTMTE is a bit of sealed discrete book because of the quest format (with the exception being when we have crossovers) but its quite insular in the sense that you’re focusing on a finite group of characters and they’re moving further way from Cybertron into uncharted space and it doesn’t lend itself to jumping into other books. So you can start with just MTMTE and it wouldn’t  be very often that you’d feel wrong footed by a piece of information or a character that you’d expected to know. Its pretty much its own thing going forward.

On how many of the story seeds are planned in advance:
Its mainly planned. Not exclusively sometimes opportunities come up. The Chaos Theory stuff on a textural/thematically level was designed to take Megatron forward as a character in particular. Some of the Chaos Theory stuff we literally reintegrated into Elegant Chaos using the same pages. When I did Chaos Theory I didn’t have that in mind. When I wrote Shadow Play, which is the second of the three pre-war stories, I did think ‘okay we are going to revisit these pages in a couple years time’. That was with a greater amount of foreknowledge. You know there’s a degree of naivety here certainly in the early days, because as I said at the beginning we thought 12-16 issues would be fine and yet I was still thinking “well you know if we stick around…”

Is Issue 113 the end or are there other stories to tell:
You’re not the first to suggest 113 would be an appropriate end point. But I said with issue 1 that a fitting end would be issue 100. Do I have Transformers stories to tell after that? I don’t know We’ll see. I might have said everything I’ve needed to by then. We’ll find out. If we get to, so hey…keep buying it.

Is there another franchise or passion he’d like to take on:
I love Spider-Man that would be great. I’m a big fan of Death’s Head, another Marvel/UK character from the 80’s. Kieron [Gillen] is a similar age as me. We both grew up on Transformers UK. We’re both fanboys. And we both put soundtracks to our comics as well. Dr. Who is the other huge one. Not principally a comic series but I’d love write Dr. Who whether its a TV episode or a comic.

That's just a sample of the interview. Dpalm & Kriss talk with James Roberts for over 50 minutes and there's plenty more covered. Plus Dpalm gets to nerd out and we all know how great that is. So check out the full interview below:
%CODE1%
More Than Meets The Eye is available in your local comic shop and on Comixology right now. And if you're still not convinced, check out our editorial on the best comic you're not reading.