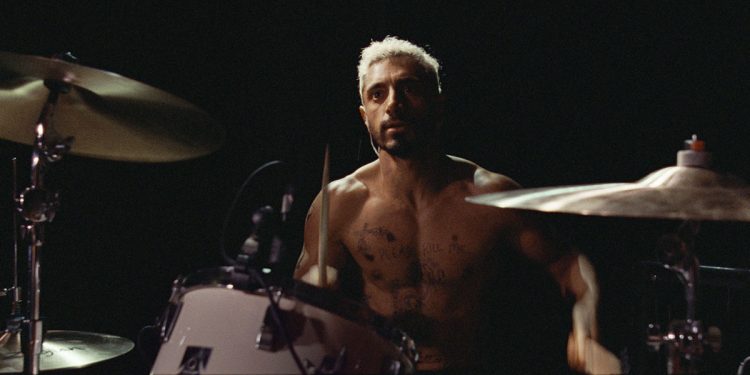 Joi8.5
Kriss8
Sound of Metal is able to challenge the audience by asking them what truly defines who they are while sneaking in great representation of the Deaf community and showing that deafness isn't an end but a new beginning. A great performance by Riz Ahmed and excellent sound editing overcome any small pacing and length issues
8.3

"I want people to think to themselves, 'If I remove everything, all the trappings of who I think I am, who am I'"

That's what Director Darius Marder says is the one thing he hopes audiences take away from seeing Sound of Metal. Discovery of one's self is the core of the film. The story follows heavy metal drummer Ruben (Riz Ahmed) as he struggles with the new reality of his life when he loses his hearing. As a former addict, Ruben is teetering on the edge of a relapse and his girlfriend, Lou (Olivia Cooke), knows that if she doesn't get him help soon he will backslide. Ruben is determined to "fix" the situation and refuses to accept that his hearing loss is permanent. The sober-living support group that Ruben and Olivia find for him is also a deaf community and it forces Ruben to confront the reality of his situation and determine what he actually wants to become. The core of Sound of Metal comes down to the words spoken in the serenity prayer: Accepting the things you can't change, finding the courage to change the things you can and having the wisdom to know the difference.

It should be no surprise that Riz Ahmed does a fantastic job as Ruben. The role is a challenging one requiring Ahmed to embrace the different stages of Ruben's progress: Manic desire to "fix" his problems without accepting then a basic understanding what his new reality is and finally a semi-acceptance of it. Ahmed is able to draw the audience into his performance and ensures that Ruben stays a sympathetic figure throughout his struggles. We all might not be addicts (recovering or not) and maybe we don't know what it's like to be deaf. But we can all relate to the feeling of losing (or being threatened with the loss of) a piece of what we believe defines us. Ahmed is able to capture the desperation of Ruben without feeling contrived.

One of the most noticeable thing about Sound of Metal is the care it takes when addressing the Deaf community. In a move that is unfortunately not the norm, the cast includes members of the Deaf and hearing impaired community. Lauren Ridloff, new comer Chelsea Lee, Jeremy Lee Stone and others represent their community adding a level of authenticity and care that typically isn't presented in films. While Ruben finds his new situation to be a burden and a disability, those he is surrounded by see it as an accepted part of their lives. This helps turn this film into being more than just a film but also an educational tool about what it means to be deaf. And by having actual members of the Deaf community in the film, Sound of Metal doesn't feel like a preachy interpretation but rather the genuine deal.

The use of sound (and the absence of it) in Sound of Metal should definitely generate some buzz come award season for sound editing.  It’s an important piece in telling Ruben’s story and keeping the audience engaged. The film opened with the thunderous sounds of heavy metal drumming that are so loud I  wondered if maybe there was a mistake and someone turned the volume too far to the right. As the film goes on you realize that every aspect of sound is purposeful. One of the best scenes in the film is when Ruben finds himself sitting down at the table with the rest of the group for dinner.  Since Ruben can't sign, he sits in a silence that is only broken when Joe (Paul Raci) interprets what some of the other members are saying about Ruben. But then the camera pans out and the sound kicks in and you hear that while the rest of the group is deaf and signing, there is clearly audible sounds through their communication. You hear their laughter, the sound of the table being slapped as well as the sounds of their very animated and enthusiastic signing with each other. It's a reminder that just because these individuals are deaf there isn't an absence of sound.

If there is one issue with Sound of Metal it would be the length and pace. Clocking in at 130 minutes, the film feels longer than it is and that comes from it lingering too long in certain places. Still, Sound of Metal is a compelling story and well worth checking out despite any minor pacing issues.