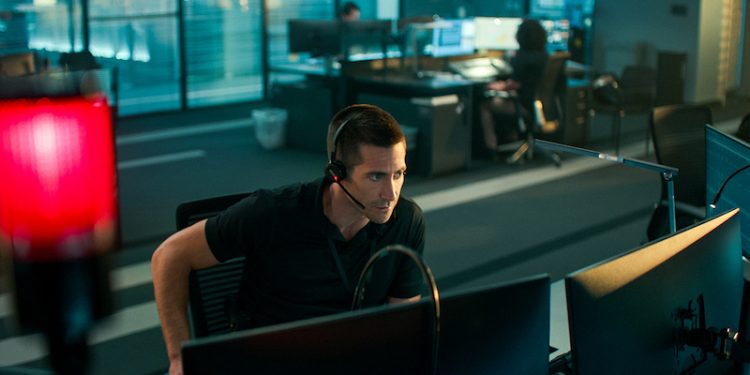 The Guilty is one of those films that feels like actually benefited from COVID restrictions. Any other time and this film would have gone too far into showing us car chases and big set pieces. Even worse, it would have turned this film into a cop propaganda film that happens so often when a police officer that is clearly unhinged is somehow made into a hero. Instead what we got was an intense thriller that plays on the concept of police jumping to conclusions and how that can lead to dangerous situations.

There are several things that really work for The Guilty. First and foremost is Jake Gyllenhaal. Gyllenhaal might be one of the latest set of celebrities to dry snitch on themselves when it come to their questionable hygiene habits but the man can still act his ass off. Playing demoted and clearly troubled officer Joe Bailey, Gyllenhaal captures completely frantic and out of control nature of a police officer that should never have a badge and a gun. Intensity is something Gyllenhaal always brings to his characters and his Joe Bailey really channels his Louis Bloom character from 2014's Nightcrawler. He's very unlikable and clearly shouldn't be working dispatch much less being a cop with a badge. But he also serves as a great vantage point for how dangerous it is for cops to try too hard to dictate situations and jump to conclusions when they don't have all the facts.

The rest of the cast is also well suited for this film. Most are not visibly seen (due to Covid restrictions) but still do a great job helping to bring the story together. Da'Vine Joy Randolph plays a CHP dispatcher who routinely reminds Officer Bailey he doesn't have the authority to tell her or anyone else how to do their job. Its a much needed performance that serves in contrast to Bailey's ego and need to play supercop. Peter Sarsgaard and Riley Keough also give great performances that help drive the level of urgency in the film. Also, like Randolph, they do a great job playing off of Gyllenhaal and help enhance his performance since all of their interactions happen through the phone. This is a huge reason why this film works so well.

Usually films do better when they “show instead of tell” you what’s happening. However, in The Guilty, hearing what’s happening without actually seeing it works to the film’s advantage. It puts the audience right there in the seat with Officer Bailey with a  little sense of hopelessness because just like him, there’s nothing you can do but sit and wait for someone to explain what happened. this increases the tension in the film and really draws the audience in. It also makes the film feel like there are real stakes. More importantly though, it shows how context matters and that when you’re only one the receiving end of information, it's easy to jump to conclusions that could have devastating consequences.

The Guilty has suspense, tension and a sense of urgency that all make this a film worth checking out. Even better, it also shows how the “super cop” on the police force isn’t a good thing for public safety and doesn’t shy away from it.

The Guilty will release in select in select theaters on September 24 and on Netflix October 1.