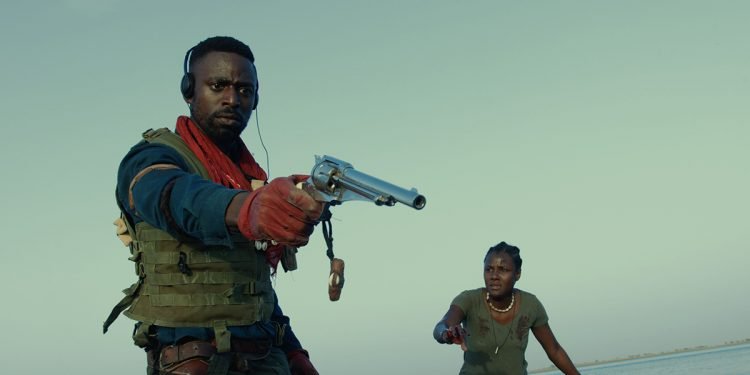 If Saloum is an example of what we can expect from new distributor Lacmé Studios and director Jean Luc Herbulot, then the future is very bright for what we might be seeing coming out of African cinema over the next few years. Clocking in at only 84 minutes, Saloum is able to tell a compelling story that covers several different themes while also being interesting and entertaining story. Usually when a film is trying to do so much and has such a dramatic turn, it loses what it’s trying to say and confuses the audience. Either that or it just runs out of time to fully flesh out the story.

In the beginning this film has the same feel as a spaghetti western or samurai film. It follows three mercenaries that you don’t know much about and are unsure if they’re bad guys or good guys. The one thing that is certain is that they have a very close bond. It’s almost like they’re antihero Three Musketeers. The audience is given just enough about each of them to know what their role in the group dynamic is. What does become clear is that their leader Chaka (Yann Gael) is hiding something and that something might get them all in deeper trouble.

What’s really fun about Saloum is the turn at the back third of this film. It’s reminiscent of the turn in From Dusk Till Dawn. The film turns into a horror film based on the lore of the region that works very well. What’s impressive is how the film is able to weave this in without feeling rushed or forced. In fact the turn actually fits in very well with the saying at the very beginning of the film “Revenge is like a river whose bottom is reached only when we drown.”

Saloum is definitely something to checkout as is anything else coming out of Lacmé Studios.