Toronto Film Festival 2021: Out of Sync 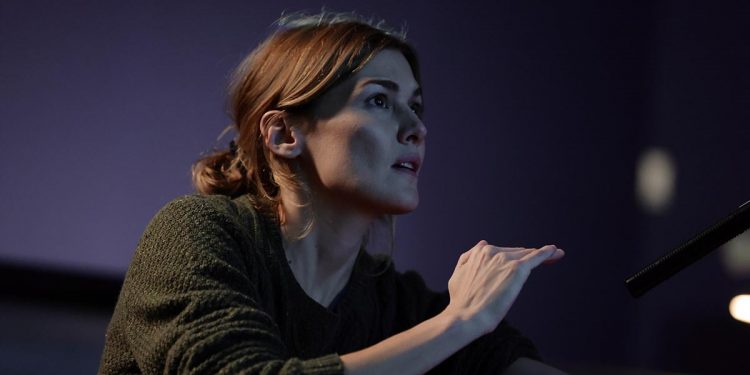 Out of Sync tells a compelling story story about a woman that finds herself slowly falling out of sync with the world both mentally and physically. It’s a good story about how a person can feel their world closing down around them but not realize that those close to them love and support them if they would accept the help.

Marta Nieto does a great job playing the unnamed lead character as detached from those around her and standoffish. She plays a sound editor whose personal life is a mess (her ex & his wife need her to vacate the apartment she’s in) and realizes that her hearing is falling out of sync. Add to that her mother has a secret about her upbringing that could be the key to what’s happening to her. What's really great about this film is that the characters you would expect to be terrible and mean, aren't. The main character thinks no one really cares about her but the opposite is revealed. She has plenty of people that care about her if she lets them. Instead she's purposely cut herself off from the world and that's led to this situation where she's now completely falling out of sync.

The sound editing in Out of Sync is outstanding. As the lead character falls more and more out of sync with the world, the delay in sound becomes more pronounce. It starts off subtly with the sound being just off slightly. Then the delay becomes longer and longer. It adds to some great moments in the film. Usually having a film being out of sync, isn't a desired effect but in this case it really does work. And honestly in some scenes it really takes some skill.

Out of Sync isn't the film for everyone but it's definitely worth checking out. The subtitles in the film actually help, especially with the delay in some oof the audio. If you can sit through that, then this will be right up your alley.