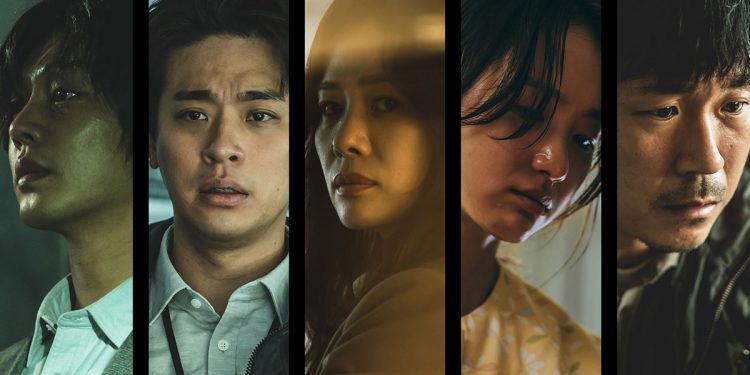 How would society react if people started getting predictions that they were set to die and be bound to Hell that came true? That’s the basis for Hellbound. And the first episode opens up showing just how serious it can be. Giant smoke “Hulks” show up and chase a man out of a coffee shop and then beat him to death in the middle of a busy street. Then they perform some kind of “ritual” that leaves only a smoking pile of ash behind. This intense scene happens before the credits even roll and does a good job of setting the stage for the rest of the first 3 episodes.

Hellbound uses the supernatural as a method to tell a story about how society reacts to events that they don’t really understand. Considering what we’ve been dealing with when it comes to COVID and a global pandemic, it comes off as very relevant. First, there’s how religion is used to try to find meaning in things that are happening. There’s a cult in this series that tries really hard to act like they’re not a cult but is clearly a cult. Hellbound uses the idea of “sin” to try to explain away how these things are happening. Obviously if people are being bound to Hell, then clearly they deserve it. There must be a reason for it and so there becomes a national interest in finding out what secrets these people are hiding.

The first three episodes unfold in a way that really suck the audience in. There are moments that almost feel like cliffhangers but aren't even the end of the episode. As things start to get revealed, more questions come up. The third episode really starts to show what's really going on and could even be a good ending if this was a film and not a series.

A Netflix release date for Hellbound hasn't been given yet but when it does, it is definitely worth checking out.