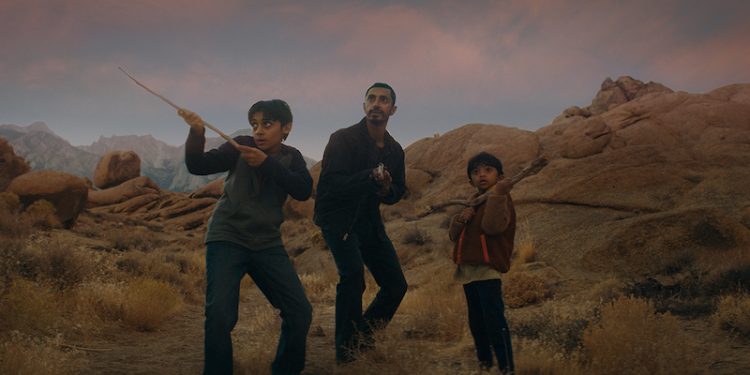 Encounter is a film that has some interesting themes but doesn’t fully flesh them all out. It doesn’t have the message it thinks it does mainly because it doesn’t fully complete the thoughts it lays out. It’s not a bad film but also not a very good one either. Really it just sits there in  the middle giving a taste of what could be important themes on policing, mental health and the need for good social workers but not producing the full meal.

The synopsis for Encounter states that the movie is about two brothers that embark on a journey with their father (Riz Ahmed) who is trying to protect them from an alien invasion. You quickly figure out that the movie isn’t really about an alien invasion but more about how we treat veterans and ex-felons and how jumps to conclusions for law enforcement can lead to deadly situations.

This cast is pretty solid. As always Riz Ahmed does a fantastic job. He always pulls out great emotions from his characters and this film even gets him to lean into some action for a bit as well. Honestly, Ahmed’s performance is probably the singular thing that saves this film from being totally forgettable. That’s not a knock against the others in this film. They’re also fantastic (particularly Octavia Spencer). But as the lead, Ahmed does a lot of the heavy lifting and had it been anyone else, it actually would have been too much to ask.

Again, this film isn’t bad and is definitely worth checking out for the acting. The problem just comes that it will feel a bit unfulfilling. There’s a really great cast here that does what they can but it’s just not enough.

Encounter is being distributed by Amazon Studios and will have a limited release on December 3rd and hit Prime Video on December 10th.