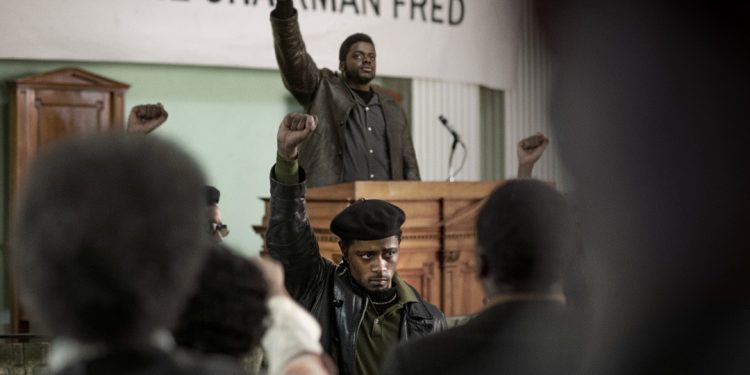 The Betrayal and Assassination of Fred Hampton

From the first shot, Hampton (played by Daniel Kaluuya, who off the strength of the trailer alone best prepare for his nominations) introduces himself as Chairman of the Illinois Black Panther Party. It's clear from the outset, Hampton inspires and invigorates. His oration serves as the trailer's heartbeat and the editing team perfectly leverages his chants transitioning from scene to scene.

But lurking behind the scenes is William O’ Neal (Lakeith Stanfield), the FBI informant who agreed to infiltrate the Black Panther's in order to get close to Hampton.

Despite finding himself skeptical about the FBI's claims about Hampton and The Black Panther Party, O'Neal insinuates himself into the movement and eventually, into the inner circle of the Rainbow Coalition. His actions ultimately lead to the demise of a visionary.

Watch the Official Judas and the Black Messiah Trailer

Watch the trailer for Judas and the Black Messiah, a movie about the betrayal and assassination of Fred Hampton, chairman of the Black Panther Party. Starrin...

There’s no better time (and based on this glimpse, no better way) to dive into the life and legacy of Chairman Fred Hampton with Judas and the Black Messiah than right now.

Earlier this week, during a virtual event “Where There’s People There’s Power: A conversation with the filmmakers of Judas and The Black Messiah.” attendees got an early look at the official trailer for the upcoming film.

(Re)Introducing Fred Hampton To The World

During the panel moderated by CNN Legal Analyst Laura Coates, producers Ryan Coogler and Charles D King, Director/Co-Writer Shaka King and the current chairman of the Illinois Black Panther Party, Fred Hampton Jr. discussed the film project and what they hoped to accomplish.

When asked how they became involved with this project, Coogler shared it was an organic process. Saying, his wife Zunzi (an executive producer on the film) first introduced him to Judas and the Black Messiah.

“Shaka King, our filmmaker, was at the Sundance Film Festival with me at the same time I was there with Fruitvale [Station]. He was there for his directorial feature debut, Newlyweeds. We were the few Black people there with our films in the program, so we met and became fast friends.”

Judas and the Black Messiah: A Vision Worth Backing

He went on to say, “when he [King] pitched the project to me I was just kind of blown away. Chairman Fred Hampton is somebody whose life’s work and the story of his assassination has been relevant since the day it happened. It only continues to become more relevant with context. But I also think that Shaka's point of view and how he wanted to tell the story was also something that's extremely relevant as well. So it was a project that Zinzi and I couldn't really get out of our heads.”

After receiving the call from Coogler (and reading the script), Charles D. King signed on as a producer. King added, “When I read the script, I was blown away by it. I already loved Shaka's work and I was honored to be a part, to be asked to be a part of this. And then it just only continued to enhance as we got to spend time with Chairman Fred [Hampton Jr.] and Mother Akua and to really know that much more about the story than even what was in the original screenplay that this story will adapt.”

Preservation of a Legacy

Chairman Fred Hampton Jr. wasn’t shy about expressing his early skepticism about seeing his father’s story told for entertainment. “Well, it wasn't an easy conversation. A lot of days and nights, lots of hours of dialogue, background checks, checking what we refer to as ‘people's community credit cards.’”

But eventually, Hampton Jr. blessed the project. “We try to look for innovative ways to be able to get this legacy out, but make sure we cross the T's, dot the I's but still coming in as realness,” he explained. “Recognizing we got to use different modems, different arenas but not compromising the legacy.”

Shaka King’s vision as director and co-writer was to tell both perspectives of Hampton and O’ Neil.

“I think for me it started with the intention of what we were trying to convey and sort of choosing to tell this movie not just from the perspective of Chairman Fred but also to include William O'Neil as a major character in the movie. Because to me the movie is, in a lot of ways, about the capitalist, the William O'Neil, and the socialist in Fred Hampton, and a coward William O'Neil and a revolutionary in Fred Hampton. And I think we kind of can attach judgment to sort of both of those ideologies, but I think most people kind of actually fall somewhere between those two.”

King shared that making this film forced him to confront and re-evaluate his own motivations. “For me, you want to make a movie where the audience watches and comes away kind of questioning ‘which ancestor am I?’, you know what I mean? Like, ‘where do I fall between those two goals?’ And in making the film I find myself questioning myself where do I fall between those two.”

This trailer's certain to make you hit replay at least twice. This project is officially highly anticipated.