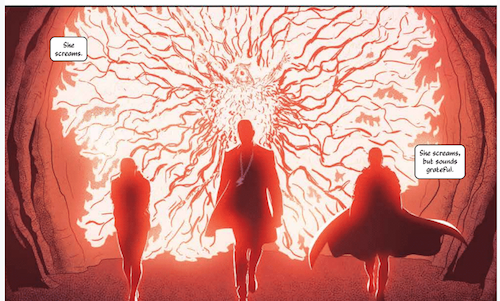 The Wicked + Divine keeps pressing on. While my reviews have not been steady, the comic has been and we've also had a chance to start from the beginning and do some audio reviews of WicDiv for Comic Book Book Club. So, when last we left, Persephone had relinquished her godhood and aborted her pregnancy. But luckily, there's still a way to break the cycle. The Pantheon just has to get on the same page and figure out what it is. This is where we all snort and whisper "fat chance" because as you'll recall, these are not only humans with god-like powers, they're also teenagers.

There's a darkness in the world, and we're going to stop it. 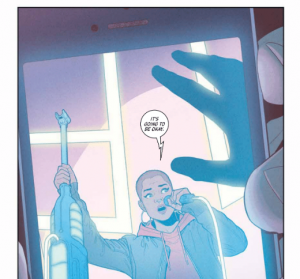 Issue 40 focuses mainly on Baal. Because he still believes in The Great Darkness that Minananke has convinced him is coming, he turns his final concert into one giant sacrifice. Because WicDiv is meta af, it's told from the point of view of found footage. Excited concertgoers not realizing they're headed to their doom, Baal leaving a heartfelt video message for his family, security cameras at the arena. Minananke is just hoping to utilize the death energy to create a psychic plague. Thank god(s?) Laura saves everyone's lives.

Why didn't I get my shit together quicker? 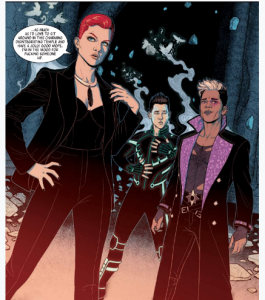 Laura is no longer the Destroyer, she's going to be the savior. And issue 41 has her breaking Cassandra and the Norns from their prison, saving Mimir, and finding Lucifer and the other heads. As soon as Laura gets Lucifer's lips unsewn, she drops the Minananke bomb and now there's just more pieces to the puzzle. The one thing Laura knows she can fix, is getting Lucifer, Tara and Inanna their bodies back. And here folks is where I cried. Tara, whose struggle has always been people not looking past her body to see who she is, decides to give her chance at a body to Mimir. Then Baphomet (Nergal if you're nasty), uses his power as an underworld god, to give Lucifer, Inanna and Mimir the Morrigan's dead bodies. It's beautiful and heartbreaking. He's forced to let her go forever but he also brings three people back. The end is always a beginning.

I really did want to live

Now that Laura has upended Minananke's plans, she has to get everyone on-board with her plan ... that she won't tell anyone ... because they have to "see it" first. Though Cassandra calls bullshit on Laura's vagueness, they all follow her because so far, she's the one with the answers. First they find out what's causing The Great Darkness and if you were paying attention back in the 1920s special, you know it's Woden from the 1831 Pantheon. Minananke's kept her alive to use her to power all sorts of horrors. Baal kills her and it's a mercy. 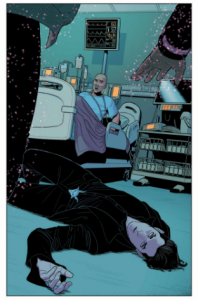 It's the first of many deaths in issue 42. Death comes in threes and our 1831 Woden's merciful death is followed by present-day Woden's bloody massacre at the hands of Minananke (can't say I'm sad about that one. He was a dick). And finally, our dear , , Cameron. He's said good-bye to the Morrigan, he's brought back Luci and Inanna. He was never built for this fight and he knows that. So he sacrifices himself to bring back Dionysus. No more do-overs. No more resurrections. They can't all make it out alive.

Quick shout-out to Bombsheller. I was able to attend their Wicked+Divine party at Emerald City Comic Con in March. Unfortunately, they are closing but you can use the code STAYBADASS to get 20% until May 19th.