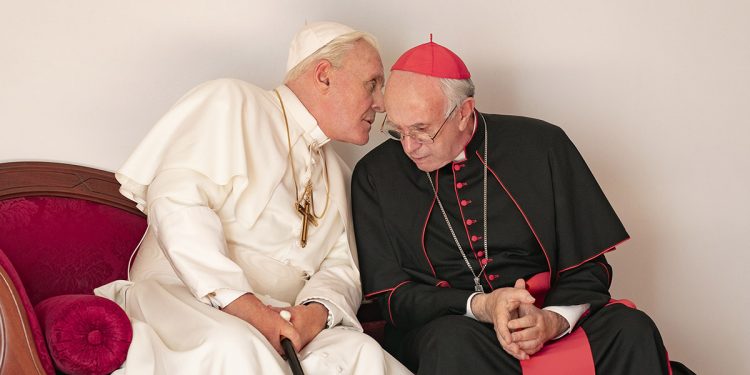 Leave it to Netflix to make evil Emperor Palpatine…I mean Pope Benedict XVI cute cuddly and adorable but here we are. The Two Popes leaves audiences in a bit of a tough position. On one hand this is a great film that balances in seriousness with humor, helped along  by two great performances. Jonathan Pryce is fantastic as Jorge Mario Bergoglio, the future Pope Francis. He's able to convey the humor and down-to-earth nature of Bergoglio in a very genuine manner. Anthony Hopkins is also perfect at Pope Benedict. Almost too perfect.
The biggest problem is what the first line of this review suggests: the glossing over the seriousness of the crimes Pope Benedict at best, turned a blind eye to. The Two Popes takes the easy way out and focuses mostly on the redemptive arc of Bergoglio/Francis. It goes into some details about his time as a Jesuit during Argentina's 'Dirty War' and his guilt for not doing more and being seen as sympathizer. Meanwhile, Pope Benedict's very real and damaging crimes, positions as Pope and other extremely harmful things are pretty much handled with kids gloves. For those that might have forgotten, Pope Benedict didn’t die. He resigned as Pope after several major scandals rocked the Catholic Church, chief among them, the covering up of rampant sexual abuse in the church. He was...IS...not a good man.
For a film coming out during award season, it's almost disqualifying for The Two Popes to take such a safe approach to evil deeds of Pope Benedict. It is particularly egregious since a film like Spotlight is only a few years out from taking home the top prize at the Oscars. And this is the struggle with The Two Popes. It's a great film, with great performances but when you tie it to the real lives that Benedict helped destroy, it becomes a bit uncomfortable.
Premium members can listen to Joi and Kriss talk more in-depth about this film below or on their Podcast App.