The Sun Is Also A Star Cannot Survive on Chemistry Alone 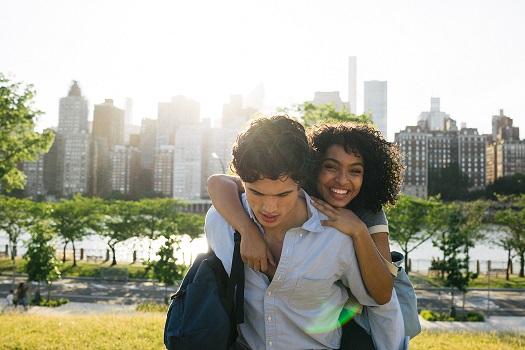 The Sun Is Also A Star: A Charming Young Love Story

Based on the novel by Nicola Yoon, The Sun Is Also a Star centers Natasha (Yara Shahidi), a teenager who meets another teen, Daniel (Charles Melton) during a critical time in both of their lives. Natasha is a second-generation Jamaican immigrant who is getting deported within 24 hours and frantically searching for a solution. Daniel is on his way to an alumni interview for Dartmouth. The two cross paths and Daniel - instantly drawn to Natasha - bets that he can make her fall in love with him in an hour. An exploration of destiny, circumstance, and love, the film is a charming ride that balances fate and reality in satisfying ways.

They Have The "X" Factor

Shahidi and Melton handle the responsibility of leading this story with aplomb. The chemistry between the two is tangible, enhanced by the close range cinematic choices. Flirty stares and snarky line delivery call back to relatable teen love moments.  At times, the relationship leaves you with a feeling of awkwardness, which sells the fact that these are practically strangers - their comfort level won't be all the way there yet. Melton, in particular, does a solid job leaning into his role as the believer of destiny in this budding relationship. He displays this beautifully when they sit in the coffee shop and set the ground rules of the bet - you can tell he making these up on the fly but he convinces Natasha (and the audience) that this adventure has merit. His level of vulnerability, suaveness, and self-assuredness is promising.

But The "X" Factor Isn't Enough

While the stars of the film succeed in keeping the story trucking along, the story itself doesn't impact in the way that was probably intended. It's an enjoyable watch but doesn't emotionally land where it should. While Daniel's personal life is interesting, it, unfortunately, comes at the expense of getting to know more about Natasha's family. Daniel struggles with the pressure of being a second generation Korean immigrant and choosing a career his family wants versus what he wants. We get to see drama between his "black sheep" older brother, his mother, and father. But while we gain that richness in his backstory, we get limited screen time from Natasha's side of the family - even her brother Peter (Jordan Williams) doesn't get any lines in the film.

Not establishing Natasha's backstory and her familial relationships does a disservice to later scenes. There's a lack of emotional weight to her family eventually being deported - which is a shame - but not surprising considering we barely see or hear from her family throughout the movie. There's still fun to be had seeing The Sun Is Also A Star. A sweet (sometimes bland) film that while has missed story opportunities still has potential as potent as the love story they try to sell.