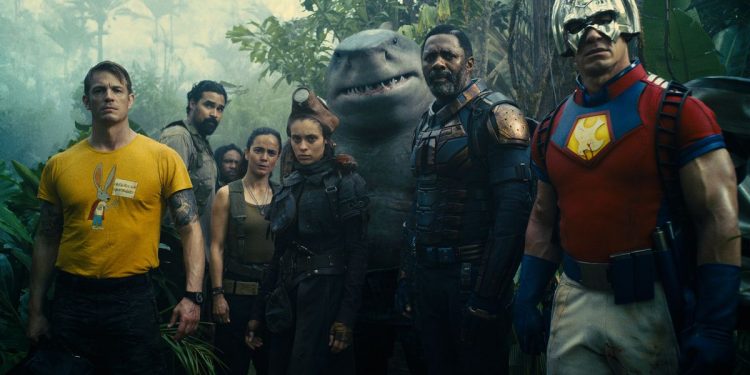 Wacky. Ridiculous. Over-the-Top. Wonderful. That's the way to sum of James Gunn’s The Suicide Squad. Honestly, it’s nice to have some competency back for a DC film. From top to bottom this film is great and it really shouldn’t have been. Just from the announcement, it felt like a weird “Is it a reboot or a sequel” type deal since some of the characters from the first panned movie were popping up in this one. This film makes it clear that it’s a soft reboot and that they’re trying to start off fresh.

The Suicide Squad is exactly what you would expect from the director that gave us two Guardians of the Galaxy movies. Take a bunch of relatively unknown characters, throw them together in an ensemble film and make you care about them (the ones that live along with the ones that die) throughout the whole movie. This feels like Gunn came in and said “Let’s take some of the story beats that were tried in the first film but do them right”. There are plenty of times where you can just see this film as taking one of Harley’s baseball bats to the dead corpse of the Ayers’ film and it’s glorious.

What stands out about this film versus its predecessor is that you actually care about a lot of the characters because there’s something to care about. Idris Elba is great a Bloodsport and the cast really rallies around him and plays off of him. You may think that DC is leaning too heavily into Harley Quinn but Margot Robbie is one of those actors that fully embodies and invests into the character, it’s hard not to want to put her into everything. Quinn is handled 1000 times better in this film than in the first. This feels like the natural progression for this character after her appearance in Birds of Prey. Also, it’s time to admit that John Cena is a very good actor. He’s in a film with Elba and Robbie and not only doesn’t get blown off the screen but holds his own extremely well.

Action-wise, this film is bloody and great. Building on something that was noticed with Birds of Prey, when you can make Harley Quinn’s fight better than Wonder Woman, you have to wonder what the hell DC was thinking with Wonder Woman 1984. Also the effects are damn good. King Shark looks fantastic and when Starro shows up, there’s no drop in quality. With this film only coming in at $175 million for a budget which is far less than the $200+ million WB has spent on worse looking films, you have to hope that maybe this is the start of a change at WB when it comes to their superhero films. But don’t bet on it.

The biggest problem with The Suicide Squad has nothing to do with the movie at all but rather with the current state/future of the DC film universe. Is this the start of a new direction for WB with DC films where they finally cut the cord from the Snyderverse? Or is this just a one-off great film and we’ll be back to the disappointing business-as-usual with the next film? Only time will tell. But for now, The Suicide Squad takes the lead as the best DC film.