The Legion of Super-Heroes Part 1 – The Great Darkness Saga 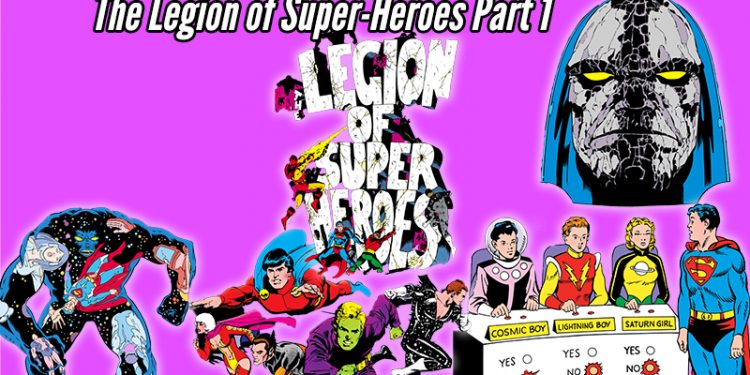 So for the 100th episode of the Character Corner, Kriss & Dpalm are finally back on the DC side and we decided we didn't want to make it easy on ourselves and so we’re tackling the Legion of Super-Heroes. The the history of the Legion of Super-Heroes is one that rivals Wonder Woman, Donna Troy and Hawkman as having some oof the most convoluted and rebooted/retconned history on the DC side. There are several reasons for why the history of the Legion is so hard to pin down. Part of that is like with a lot of these characters, it was never the plan for them to be around as long as they were. That coupled with a few other things make the Legion really hard to follow a history on:
So the first isn’t too big of a deal. there’s a lot of characters in DC history that play around with time. But when it comes to tying the characters to  to Superboy…the follow up question has to be: Which One?
Now we’ve covered Superboy's history on another episode but there’s going to be some overlap here. Particularly in the early years of the Legion.
Remember, there is a version of Superboy, particular the one we’re talking about with the Legion that is a version of Clark Kent that later grows up to become Superman. Some other notable Superboy versions:
But for the Legion, we're talking Earth-1 Superboy (Later Pocket Universe Superboy which we will get into in episode 2). For this episode we keep it nice and simple and cover all the way up to the Great Darkness Saga which is still pre-crisis and before things get all weird. We focus mostly on how the concepts and early stories for the Legion of Super-Heroes really laid the groundwork for a lot of modern stories both in and out of comics. In episode 2 we'll really dive down into some of the specific characters as well as try to unwrap the craziness that happens post-crisis.
Issues:
Like what you hear? Subscribe so you don't miss an episode!