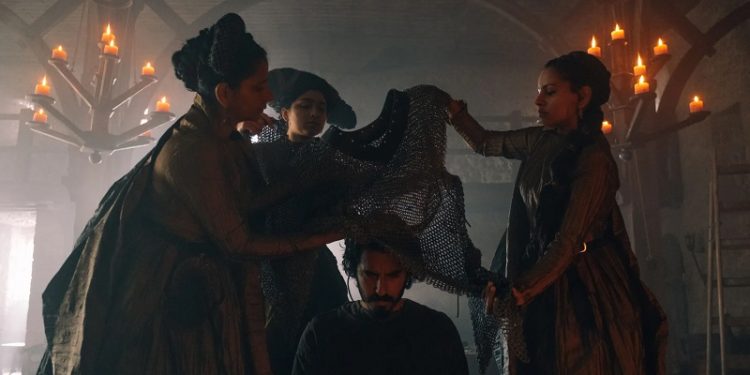 Ro9.5
Lowrey crafted this adaptation into a striking and timely parable that drives home the point that being young, inexperienced, or immature is never an excuse to act without honor.
9.5

Some choices define us. For most, that’s a hard lesson learned through life-long trial, error, and consequences. If your mother’s Morgan Le Fey (Sarita Choudhury) and your aunt and uncle the legendary King Arthur (Sean Harris) and Queen Gueneviere (Kate Dickie), however, that transformative realization may just lie at the end of a harrowing quest riddled with magical beings, supernatural encounters, and chivalric tests.

In The Green Knight, a young Gawain (Dev Patel) steps forward as his uncle’s champion to answer a challenge issued by an imposing knight who bursts into the King’s Christmas celebration with his knights of the round table just after he’s asked someone to share a story of an exciting adventure. The Green Knight (Ralph Ineson) offers a game of even exchange. Gawain is free to strike the Green Knight wherever he chooses then agrees to present himself to the Knight, in his green chapel, one year later to receive a strike in kind.

After assuring himself that Gawain understands what he’s gotten himself into - and reminding him that it’s all a game - King Arthur permits his earnest nephew to wield his legendary sword. Gawain beheads the Green Knight and almost immediately realizes it’ll be his undoing when the headless knight stands, picks up his head and in a booming voice declares he’ll see the young man one year hence. 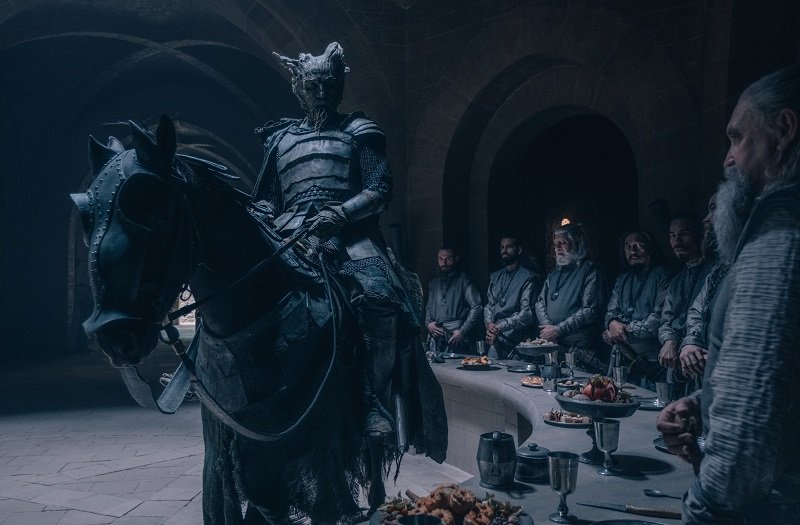 Ralph Ineson in The Green Knight from A24

If this all sounds vaguely familiar, it’s because The Green Knight’s based on a 14th century (that’s 700 years old, if you’re counting) poem from the British Isle called Sir Gawain and the Green Knight. Writer/Director David Lowery's adaptation isn’t the first time someone’s tackled bringing this tale to screen, but it’s absolutely the best. Lowery reimagines the poem for modern audiences, breathing new life into Gawain in an epic where knightly virtue meets pagan ritual and a life without an adventurous tale of honorable feats is a life yet to be lived.

The Green Knight unfolds with understated flair blending myth, mysticism, and magic into a coming-of-age story with a startling relevance. Lowrey’s Gawain is not the stalwart paragon youngest knight of Arthur’s round table in the original text. Here he’s an charming, if irreverent, young man not yet a knight but raised among them. He’s the pampered nephew of an aging king who spends more time in alehouses - and lounging in brothels in his lover Essel’s (Alicia Vikander) bed - than mastering any of the chivalric virtues (friendship, generosity, chastity, courtesy, and piety; just in case you were wondering). He’s performed no great deeds of note, come through no grand adventures triumphant, nor committed himself to any purpose (or person) other than revelry. Gawain is decidedly immature and obviously untested. One impulsive act sets him on a journey to meet his fate; and potentially discover what he’s made of along the way.

Dev Patel offers a mesmerizing performance of a quintessentially reckless youth who repeatedly finds himself in over his head. Whether still or in motion, Patel commits with every ounce of his being to creating a compelling central character. His every expression and intonation works perfectly in concert with Lowery’s gripping “show and feel” directorial style. His physical attractiveness and almost boyish sincerity creates pockets of levity and adds appeal to his often questionable decisions or seeming moral lapses. Never has a man with commitment issues been presented as worthy of rooting for. Lowery smartly lets the desire of his elders for him to reach for better build a sense of expectation deftly enhanced by Daniel Hart’s eerily immersive scoring. Because it turns out, for Gawain, keeping his word will be a more harrowing test of courage than choosing to wield Excalibur in his King’s stead.

The game truly is afoot

Gawain’s journey plays out against a backdrop of medieval castles and cottages and rugged terrain across a land that’s at turns grimly peaceful or bleak. This is a countryside no longer unspoiled and green. The civilization of man encroaches, leaving savagely uprooted trees, fields cleared or left riddled with bodies and smoldering in the aftermath battle. The Irish locations lend a stunning earthiness to the film’s aesthetic permitting Lowery to offer a narrative rife with poignant lessons and warnings about the perils of underestimating nature's capacity to fight back. 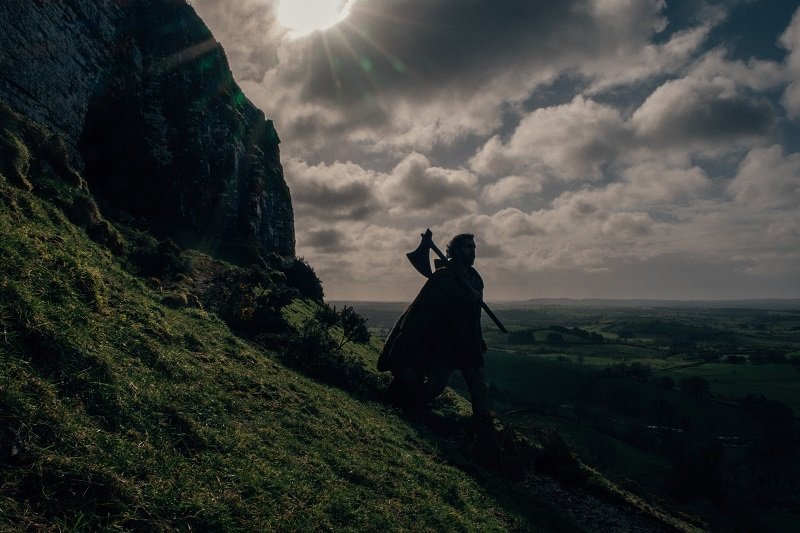 Dev Patel in The Green Knight from A24

The Green Knight’s screenplay draws on the source hard for its narrative and alliterative poems like Sir Gawain and the Green Knight rely heavily on inference and allegory. For the unfamiliar, the chivalric code measures a person’s greatness alongside his goodness. Lowrey breaks down the pivotal stanzas of Sir Gawain and the Green Knight into a deceptively simple story then uses this insanely talented ensemble to put Gawain’s character to the test - and the actors through their paces - turn after foreboding turn.

There are key moments between first Gawain and his uncle and then with his mother where the King drives home the importance of keeping his honor and his mother, Morgan Le Fey, begs he not waste this opportunity. Sean Harris and Sarita Choudhury give intensely emotive performances where words are hardly necessary. Which, naturally, makes those they choose to speak carry more weight and meaning. They, along with Kate Dickie, form a relatable touchstone for familial worry and hope.

Early on and ably aided by sign markers along the way it’s impossible to miss that the Green Knight’s real game begins, the second Gawain sets out to keep their Christmas appointment at the Green Chapel.

Gawain swiftly learns that charm and a casual manner won’t save him when accosted by ruthless scavengers (led by Barry Keoghan). A previous lack of generosity almost brings his quest to a fatal end before it’s begun. Then an incident deep in the woods with a ethereal lady (Erin Kellyman) trying to retrieve her head sets him on a course that ultimately leads to the home of a lord (Joel Edgerton) and lady (a captivating Alicia Vikander doing double duty) each intent on seducing Gawain and luring him into sensual misadventure. Lowery effortlessly updates the context of a knight's honor bound duty. Gawain knows he must resist his attraction to his host(s) but each repeatedly puts him in a position where he’s not free to deny them without potentially compromising himself with one or the other. 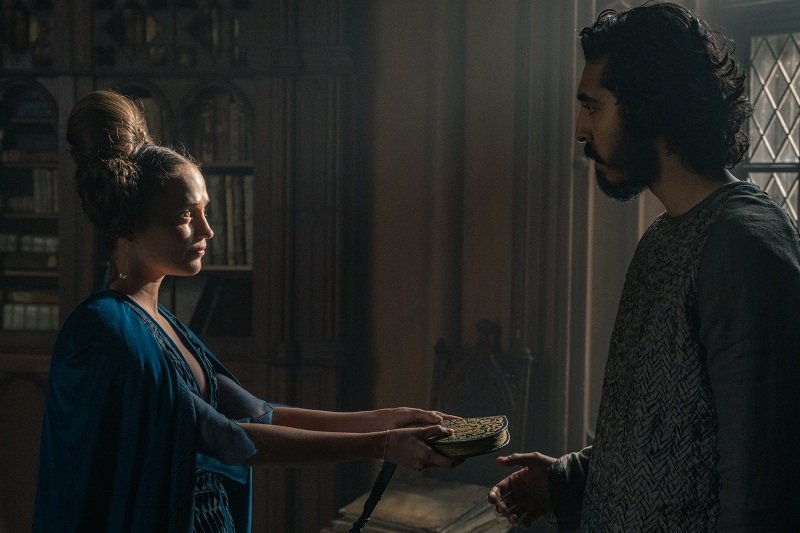 Alicia Vikander and Dev Patel in The Green Knight from A24

Watching Vikander, Edgerton and Patel dance around each other in this castle is a delightful master class in chemistry, personality, and mindfulness of character. Lowery’s deep understanding that sometimes it truly is unnecessary to say the quiet part out loud masterfully turns silence into a necessary and powerful component of this stark, yet haunting narrative. Plus, he never shies away from the supernatural elements anchoring this portion of the tale.

The point and purpose of these encounters is to highlight Gawain’s weakness and blind spots. His recklessness and inability to commit to anything, especially to being emotionally honest with himself, must be confronted head on. Otherwise, he’ll never be worthy of knighthood (or so many other things in life). Lowery’s Gawain is at a crossroads long before he reaches the Green Chapel but what he chooses to do with the lessons he’s learned once he again encounters the Green Knight, will be the making of him; or lead to his ignominious demise.

Lowrey crafted this adaptation into a striking and timely parable that drives home the point that being young, inexperienced, or immature is never an excuse to act without honor. Admittedly, his preference for emotionally dense but dialogue light storytelling won’t be for everyone. And if the film has a flaw, it's in the pace that disrupts the addictive, tumultuous rhythm that is the driving pulse behind this director’s signature mix of sight and sound. His directorial choices can, and certainly do, make for a gorgeous production when translated into lush costuming (designer Malgosia Turzansk), sweeping vistas, period perfect set design, all showcased through DP Andrew Droz Palermo masterful photography. Narratively, however, the end result relies on the kind of subtlety and dramatically nuanced action-adventure that is not to everyone’s taste.

But, Lowery weaves folklore, Arthurian legend, ritual and symbolism into such a breathtakingly rich cinematic tapestry it's worth the ride for that experience alone. Because from its peculiar bargains, hallucinations, highly consequential dream sequences, plus some decadent jewel-tones (deliciously highlight that not all heroes, or leading men, need to be white) married to a performance by Dev Patel that leaves no room for anyone to doubt the depth of his talent ever again; The Green Knight is simply sublime from start to finish.

The Green Knight opens in theaters on Friday, July 30.