The Gentleman is All About the Journey 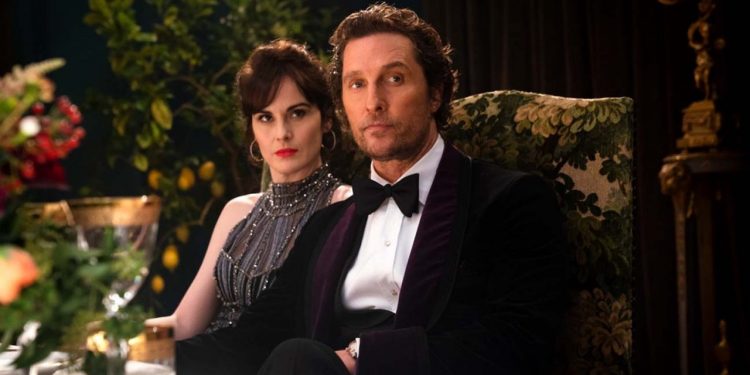 Ro8
Kriss7.5
The Gentlemen pokes fun (and holes) in all the caricatures of typical gangsters and their bag men. This is a simple story intended to take you on a outlandish journey along with a crew that despite its best efforts never manages to resolve an issue without violence.
7.8

The Gentleman Leans On It's Ensemble

Mickey Pearson made his name selling weed to the London masses. His empire is vast yet completely under the radar. He's ready for something different and believes he's found a buyer for his empire in American billionaire Matthew (Jeremy Strong). What starts out as a simple deal turns into a journey we travel with what has to be the thirstiest most unreliable narrator Fletcher (Hugh Grant),  a private investigator looking to cash in all the information about Mickey and his deal with the highest bidder. Fletcher breaks into Mickey's number two man, Ray (Charlie Hunnam and pitches his deal as though selling a movie.

Matthew McConaughey leads an all-star cast but he's not really the center of this story. More importantly the film's best moments come courtesy of Hugh Grant, Colin Farrell and his crew of misfit fighters (who really need their own series), and Henry Goulding. Rosalind Pearson as portrayed by Michelle Dockery is low-key yet compelling and deceptively integral.

This story happens with all the cards face up on the table.

A shallow read on The Gentlemen would see it labeled: dated, tone-deaf and racist. That is until one remembers 1) this is a Guy Ritchie crime flick and 2) the narrations in the hands of by a scheming man trying to convince a criminal to give him millions of dollars. Fletcher is the living embodiment of problematic. He's here to sell a story and get a payday. So, it's natural to assume the ridiculously stereotypical embellishments are meant to be outlandish. The Gentlemen pokes fun at (and holes in) all the caricatures of typical gangsters and their bag men. Context is everything in this simple story and now's not the time to lose your sense of humor; unless you just want to have a problem with this film. Ritchie's shoving your trash-ass behavior in our faces this time around with flair.

This is a simple story intended to take you on a outlandish journey along with a crew that despite its best efforts never manages to resolve an issue without violence. I know, it's hard being the only grown up in the room. The Gentleman's stylish, irreverent, nostalgic, and intentionally problematic. Ritchie's signature moves take on new life, at a slightly slower pace, and thrives on chemistry and the haphazardness of all it's moving parts.

Guy Ritchie is back doing what he does best and the only bad thing about is he's created a few characters you'll wish got far more screen time.

Listen to Kriss and Ro's spoiler-free (it was hard y'all) review about The Gentleman; they had plenty of opinions. And, once you've seen this one for yourself, come back and hit up premium to hear what kept them invested in this ridiculous-ass hot mess of a business deal even.

Kriss & Ro's spoiler review is now up for Premium members below