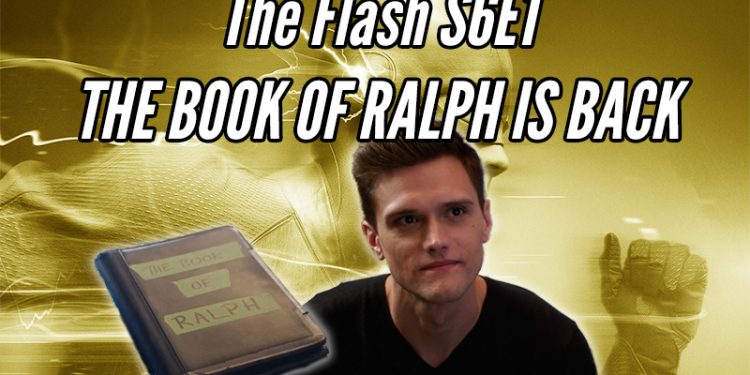 New Suit. New Villain. More importantly…NEW VOLUME OF THE BOOK OF RALPH. Yes folks, it must be that time. The Flash is back for season 6 with Into the Void. Now we’re not saying that if DC released a limited edition, leather-bound copy of The Book of Ralph Volume 2 as a collector’s edition that we’d forgo our bills and budget to immediately buy it. But hard decisions would have to be made.
Honestly though, it is good to be back with The Flash. Season 5 was a great season that brought the show back to its season 1 glory. We got great growth for all the characters and the writers no longer stretch out plot points that the audience can clearly see over several episodes. Flash season 6 picks that right up with us clearly seeing that Barry and Iris, despite what they say, are not handling Nora’s erasure well. Barry has buried himself in his work as the Flash and Iris is hoarding items from Nora and trying to bury her feelings with the idea that this is temporary and she’ll see Nora again. We appreciate this season not dragging out what we can clearly see through.
We’re also interested in what the show does with Dr. Ramsey Rosso aka Bloodwork. Like Godspeed, Bloodwork is a relatively new addition to the Flash world (debuting within the last couple of years) and to be honest, isn’t really an interesting villain. But considering what the show did with Cicada last year, we’re intrigued to see where they take Bloodwork this year.
And then there’s the elephant in the room: Crisis. Crisis on Infinite Earths is either going to be the most amazing and ambitious crossover the Arrowverse has ever done or a spectacular failure. There’s really no in-between. Personally, we’re excited for it and think it will be great but it is clearly going to be an ambitious task. That said, out of all the Arrowverse shows, The Flash is the one that seems to be the most prepared for it. Since season 1 when Thawne showed us that newspaper article, we’ve been preparing for this. We don’t know how it will unfold but it does feel like we’re about to get a culmination of 6 seasons of prep work.
Listen as we chat up the season 6 premiere of The Flash.