The Flash Review: The Trap 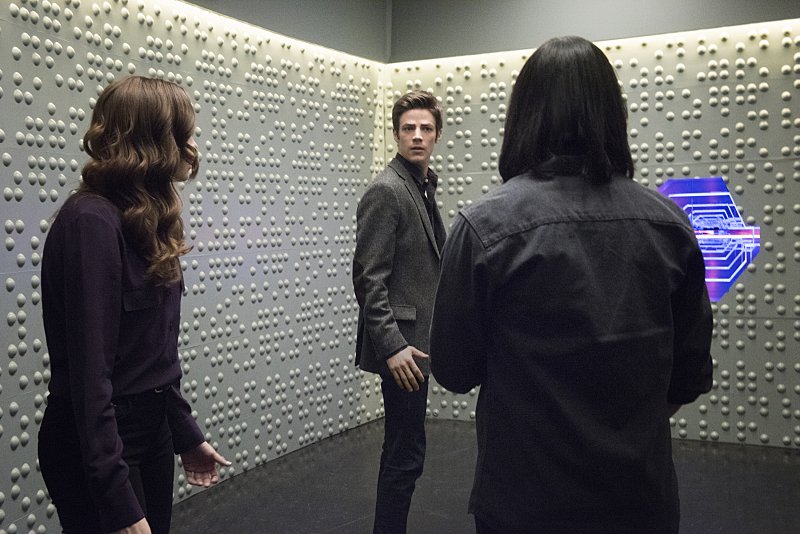 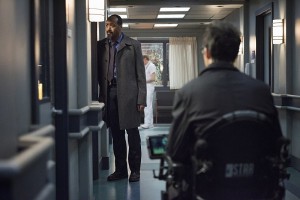 I think it’s very interesting what this show is doing. Wells/Thawne has been such a consistent villain in the background (finally coming to the forefront) this entire season it makes me wonder what will happen next year. Sure other shows have done similar things with their first season and major villain but The Flash is a little different. Wells/Thawne has been more than just a villain. Throughout this episode (and season) we’ve seen him not only help Barry but form a bond with him. It’s an intriguing relationship. Thawne is Barry’s arch-enemy but he was thrust into a position where he had to be the one to create The Flash in order to kill him. In the flashback we see that he was tempted to kill Barry while Barry laid unconscious in STAR Labs but knew that he couldn’t. Makes me wonder what caused the feud between Eobard and Barry that would have his hatred running so deep that he could become Barry’s savior and mentor and still promise to kill him.

Eobard Thawne is one diabolic and evil son of a bitch. You can say that about a lot of villains but what makes Thawne so good is that he’s constantly been one step ahead of Barry (not just physically but mentally too). It actually makes sense that he would have set up cameras to track everyone’s movements and be aware of all that they were planning. I knew there had to be something he had up his sleeve when he walked into the room with Cisco. First off, I knew that Cisco’s plan was flawed because I asked myself “Okay, it stops a speedster but what if he just walks through the field?”  On top of that everything just seemed to be too easy. Wells/Thawne has shown a habit of using the metahumans locked up in STAR Labs for his own needs and to defend himself when needed. It’s going to be interesting seeing how these final episodes go now that the secret is completely out. 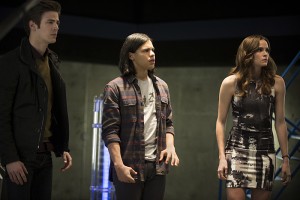 We get a glimpse of the future in this episode through Barry, Cisco & Caitlin interacting with Gideon and reading Wells/Thawne’s newspaper from the future. A few things we learn. First, of course Cisco is the one to notice the updated suit. I suspect we’ll see the more traditional Flash costume either the last episode of this season or in season 2. You don’t show us that suit and then not put Barry in it. Also, now that Cisco has seen it, you know he’s going to to create it (his little freak out over the rules of time travel was so great. I love this character). Then Gideon reveals that Barry built the computer so anything Barry tells it, it will do. Then finally, there’s the reveal that the article about the Flash in the future as written by Iris West-Allen. This is an important reveal with everything else that goes on in this episode with Iris-Barry-Eddie. First there’s Joe with his Black Fatherhood/Wingman of the Year denial of Eddie. I loved that Joe thought he had some say in Eddie asking Iris to marry him. Eddie looked so blown. Then Barry, who is determined to stay in the friendship zone even tells Eddie he’ll talk to Joe about it (despite knowing what SHOULD be his future). There Joe again breaks out the Black Fatherhood Moment and tells Barry that he knows that Iris should be with Barry and that if she marries Eddie she’ll realize she made a mistake but won’t leave. Seriously, Joe West might be the world’s greatest cockblocker AND wingman. Well…maybe Eobard should take the cockblocking title cause he really did take Eddie right before Eddie could pop the question (The disrespect when he tossed the ring and the box  was just amazing). It brings up an interesting question, what is his plans for Eddie? What does he mean by using him as insurance? Also, now that everyone knows that Eddie is related to Eobard, how will that change their attitudes towards him? I wonder if that confirms for Joe that there’s no way he wants Eddie to marry Iris. 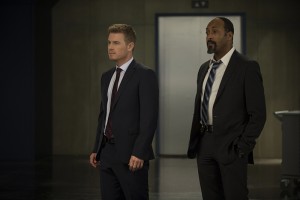 Speaking of Iris, I think we’re moving towards getting the Iris everyone wants. I think on both this show and Arrow, the women on the shows do better when they’re kept in the loop and free to make their own decisions. I don’t fault the writers with starting them off in the dark though because it represents our society. Men foolishly think we have to protect women by keeping things from them. It’s a product of patriarchal society and when you think about it, it ends up hurting the men more than the woman. If Iris was kept in the loop, she wouldn’t stumble upon things without realizing she’s in over her head. Hell, Barry would probably be with Iris right now if she knew. It’s much harder to protect someone when they don’t know they need protecting. Iris has no clue how much danger she’s in right now and it’s because both her father and Barry are trying to protect her by keeping her in the dark. While some people hate that writing, I like it because they constantly show the consequences of this being negative. The downside is, it is detrimental to the character because you get glimpses of what they can be. The scene with Iris talking to the unconscious Barry in the flashback was so good. These are the kinds of scenes we could get with Barry and Iris. The good news is, this show isn’t going to keep Iris in the dark for several seasons. By the end of this episode, Iris pretty much knows Barry is the Flash. My question is, while she tell Barry and Joe that she knows now or will she keep it to herself a little longer?

Another great episode. A lot of the major secrets are back out in the open. Barry even acknowledges that he’s gone back in time before. We even got Barry using his speed to create a vacuum to put out the fire (By the way, I love that they’re embracing Captain Singh’s relationship & love).  I really don’t have any major negative for this episode. At this point this show is the same as Agents of Shield for me. Something major has to happen in a negative way for me to give any episode for the rest of this season less than an A+. This is fun and incredible TV to watch.

*Bonus Black Fatherhood Moment* Joe telling Barry that this is all his fault and that he should never have accepted Wells' offer for help when Barry was in the coma.  Joe West is America's father.