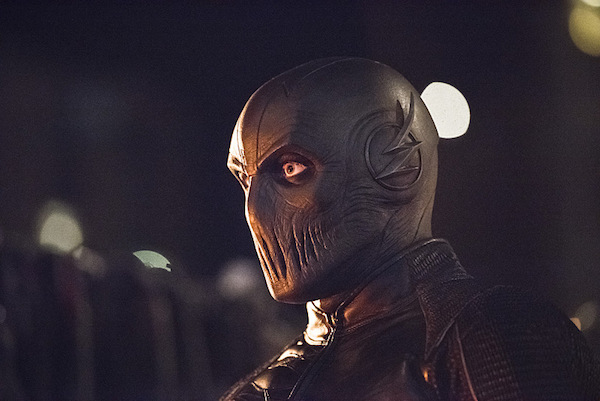 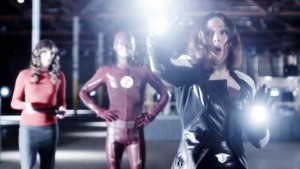 Episodes like Enter Zoom are why we stopped giving a score to The Flash. After a while you just start reaching a wall as far as what score you can give an episode and you start having to nitpick in order to have your scores have some consistency. Instead I’d rather just say “This show is fucking good” and recap and discuss what happened and what makes it such an engaging hour of television.

One of the great things about The Flash is that the show is written to be self aware. In Enter Zoom, the plan is to draw Zoom out using Earth Prime Linda pretending to  be Dr. Light. We all knew how stupid this plan was from the minute we saw it in the preview. Instead of trying to string us along with a plan that we all know is not going to work, this episode is self aware enough to have the characters doubting this. Jay doesn’t even show up, Joe tries to talk some sense into Barry and it doesn’t work. To make it better, they then wrote purposely bad and cheesy dialogue for the fake fight just so we all knew how silly and stupid this plan was. It was like watching a showdown on the 1990 Flash TV Show. What really works is that it disarms you and makes you think everything is going to be okay, then Zoom enters into the picture and everything quickly escalates to serious horror show. Worked perfectly.

Barry and secret identities
Another episode and another person is brought in on Barry’s secret. To be fair, in the grand scheme of things not too many people know. I think in the case of Linda Park, this is something Barry had to do. He was asking her to risk her life and put her in the direct path of Zoom, the least he could do was trust her with his secret. Truth is, i’m actually hoping Barry goes public with his identity much like Barry Allen from the comics (Pre-Identity Crisis). The reason I want this is because it would break the typical super hero trope. Secret identities for public superheroes are tricky and honestly don’t make any sense. We all know the ongoing issue with Superman's (and Supergirl’s) identity. How does no one notice them just because they put glasses on? But they’re not the only ones with easy to figure out alter egos. You mean no one has figured out that Batman and Green Arrow both showed up at the same time that Bruce Wayne and Oliver Queen came back from the dead? Seriously, both of them come back after being declared dead and surviving in horrible conditions and at the same time masked vigilantes show up? Oh an not just some random masked vigilantes but ones with tech only a billionaire could afford? Yeah so secret identities never really make sense. That’s why it would be interesting if they decided to make Barry go public with his. It would be another way of separating Barry/Flash from the superheroes we normally see. A different type of story could be told if Barry’s identity is public. 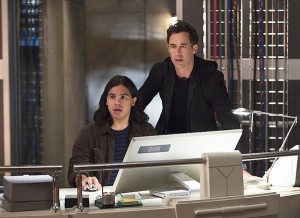 So Harry is definitely a dick but he might not be a bad guy after all. I was able to avoid most of the casting news before the season so I didn’t know that Wells’ daughter (Violett Beane) would be Jesse Quick. I really doubt that we will see her as a speedster but that’s still a pretty nice revelation. I still think Wells knows more than he’s letting on. He came to Earth-1 for Barry because he thought Barry could stop Zoom. He’s very familiar with the Multi-Verse and what Zoom is after. Also, why does he want to capture Zoom and not kill him? For a guy who has done so much evil and has kidnapped Wells’ daughter, you would think he’d want Zoom dead. But he doesn’t. Why? 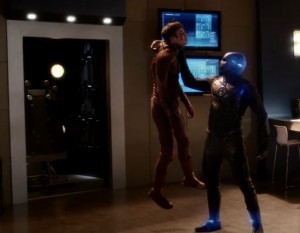 While most of this episode is Barry and the team trying to prepare to lure Zoom out we actually don’t see Zoom until nearly the end of the episode. It doesn’t matter that he didn’t get a lot of screen time, because what he did get was terrifying. Any fear that Zoom would just be a rehash of Reverse Flash should be gone. Zoom is almost demonic, particularly with Tony Todd as his voice. He caught lightning. He caught lightning Barry threw at him and threw it back at Barry. I didn’t even know that was possible. The beating Zoom then puts on Barry might be one of the worse we’ve seen when it comes to a superhero getting a beat down. Not just because of the beating but because of Zoom then parading Barry’s limp body to the newspaper and police department. The true audience was definitely Iris and Joe which leads to the question: Who is Zoom? The two big candidates are future Wally West and Earth-2 Henry Allen. I make the case for Wally West here and Dpalm lays out why it could be Henry Allen on the Super Tuesday Recap. Check both out and let us know what you think.

[divider]
This show continues to be great and fun to watch. It’s great to see a show that can switch tones so effortlessly and not ruin the show. For the first half of this episode, while what they’re doing is serious, the way its presented is so over the top and silly, you almost forget the stakes at play. Then Zoom puts the beating of a lifetime on Barry and you’re quickly reminded that this isn’t a game. Now the Fastest Man Alive is in a wheelchair and can’t feel his legs. Oh and Grodd returns next week. This is going to be interesting.

Catch the rest of my thoughts on the Super Tuesday Recap on iTunes and Stitcher. Live us a comment, review or an email to let us know what you think of this episode or your theories on who Zoom could be.