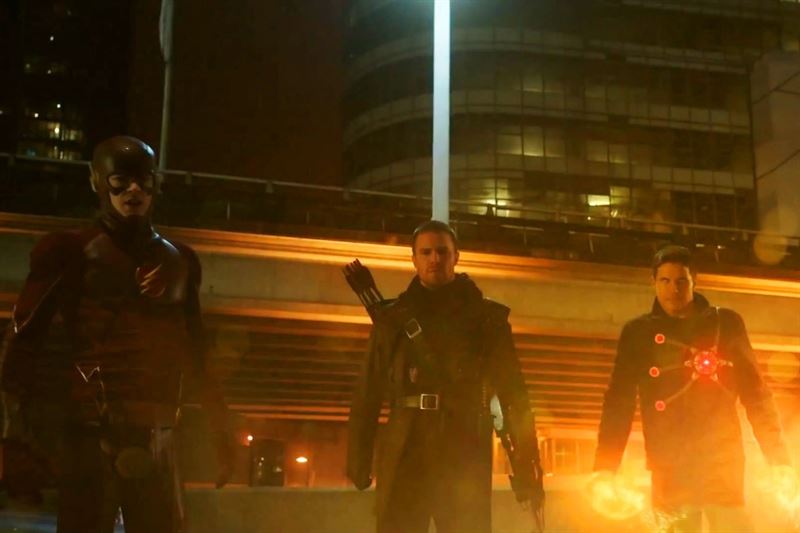 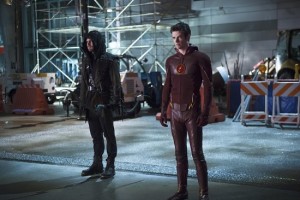 One of the big questions about The Flash when it was announced was how they were going to deal with it being in the same universe as Arrow, yet maintain a different tone. There’s the obvious things like making Arrow very dark while The Flash brightens things up a bit. But there was also the issue of making each hero their own character. I think that’s one of the things that makes comic books so fun to read. Seeing how even if you’re a good guy and you follow a general code, the method to being a “good guy” can be so different. And what works for one character won’t always work for another. The Flash did a great job of setting that up with the earlier crossover, Arrow vs Flash. Oliver is a loner who tries to do everything himself and is forced to work with others. Barry on the other hand needs those close to him to give himself the confidence he needs to make things happen. Oliver is calculating while Barry literally will run head first into a situation without thinking it through (no matter how book smart he is). Especially now that its revealed that his mentor was not only lying to him but is the man who killed his mom and wants him dead as well. With Wells/Thawne one step ahead of Barry, it makes sense that Barry is unfocused and making bad decisions. Working with your enemy isn’t something unheard of (especially in this universe). Oliver’s done it before (He’s been working with Malcolm Merlyn all season). Diggle’s worked with the Suicide Squad a few times (side by side with the man who killed his brother). The difference in both of those cases though is that Oliver & Diggle never gave their enemy total control and power over them. Barry made the mistake of giving Captain Cold what he wanted before agreeing to help transport the other Metahumans. He gave up the only bargaining chip he had to keep Cold from betraying him. This is because Barry is still so young in this superhero game and he’s extremely naive. Snart betraying Barry was basically the story of the Scorpion and the Frog (“It’s in my nature”). It was a viable lesson for Barry. 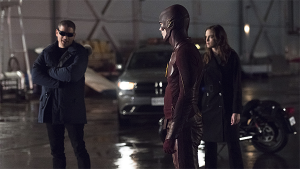 Wentworth Miller has been my favorite villain next to Tom Cavanagh’s Wells/Thawne. He has this mix of camp/seriousness for playing his character that reminds me of Kyle McLachlan as Cal on Agents of Shield. It’s so great to watch. It’s also perfect for Captain Cold because while he’s an enemy of Barry, he’s enjoying playing the game. He could have killed Barry after betraying him but instead, he’s enjoying the game of cat & mouse. It’s like a less deadly version of the game the Joker plays with Batman. It’s the thrill of the chase and making Barry’s job harder that intrigues him. Think about it, he didn't even tell his sister that Barry is the Flash. To make it even better, it seems his sister Lisa really does have a thing for Cisco. This keeps with the theme of how this show differs from Arrow. Cisco & Caitlin don’t really have to beg Barry to let them help him. He depends on them and keeps them in the loop (for the most part). It brings a different dynamic to the show. It’s like the Black Fatherhood moment we got this week with Joe basically giving Barry the “I Told You So”. Barry says he could do what Oliver’s done but what Barry doesn’t realize is that the cost of doing things like Oliver is too great for Barry. Oliver would have quietly prepared and anticipated Snart’s betrayal and told no one else and possible put them in danger. Barry doesn’t know this but Oliver’s method of doing things has caused some major and possibly permanent damage to his personal relationships. Oliver believes he can survive without those (even though that’s not true) but Barry NEEDS those relationships. Its one of the things Wells noted about Barry earlier in the season.

Speaking of relationships, I want to know what Eddie’s going to do next. Eobard really got into Eddie’s head and has him refusing to even attempt to change his future. He’s pretty much given up on Iris and conceding to Barry. Which makes me wonder, was this the plan the whole time? Think about it, why did Wells/Thawne choose this moment to reveal that he was hiding out in STAR Labs and was holding Eddie there? Barry himself even said that he’s been one step behind Wells/Thawne at every turn. So why reveal himself now for no reason? Why make it so they could finally find Eddie? I think this was part of the plan. Despite what he said about Eddie being the “unremarkable Thawne” I think he knows that Eddie is the starting point of the hatred towards Barry and in order to preserve the future, Eobard had to kickstart that. Remember, he caused the particle accelerator accident to happen sooner than it should have. That had the affect of Barry becoming the Flash sooner and probably changed the dynamics of Eddie & Barry’s relationship. I think it was important for Eobard to drive home the wedge between the two. 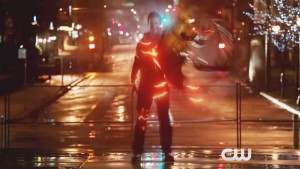 All this talk about the differences between Arrow and Flash and I still have to say, Oliver Queen is that guy you always want on your side. Not only did he show up but he showed up with arrow tips with nanites that helped zap Eobard’s speed. Like I mentioned before, Oliver is always one step ahead. This was such a great team up to watch. If there’s one complaint, it was that I wish we got a little bit more of it. Only because it was just so outstanding. First off, Wells/Thawne had the suit in the ring. I caught a glimpse of that in the promo but seeing it fully in the episode is in my Top 3 fanboy moments for this show. I can’t wait to see Cisco play around with not only that but updating Barry’s suit for Season 2. It’s the next evolution so that Barry doesn’t have to keep running back to STAR labs to get his suit. It was also great seeing the three heroes working together and combining their powers (or arrows in Oliver’s case). Also a nice nod to tonight’s Arrow season finale with Oliver telling Barry he’s going to need a favor.

I should also mention the fight against the Rogues was also pretty bad ass.I want to see more Rogue team-ups to put Barry in a tight spot. I forgot that Anthony Carrigan was pulling double duty on DC shows as the Mist on The Flash and as Victor Zsasz on Gotham.  I also caught the Green Lantern reference about Ferris Airfield being shut down because one of their test pilots went “missing”. I see what you did there.

One more episode left of this fantastic season. After Agents of Shield and The Flash (And even the second half of Arrow this season) the new comic book shows coming out in the fall really have a lot to live up to. I hope they’re up to the task because after getting this greatness, we’re not going to accept less.