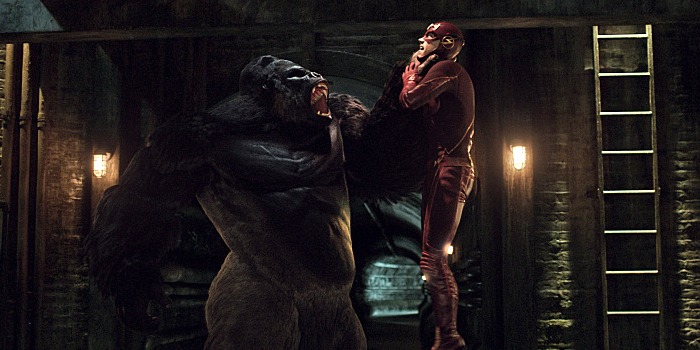 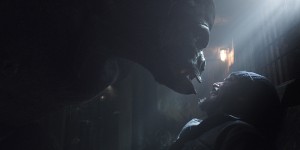 Ever since the teaser poster and the ominous hints at the beginning of the season, we’ve been anxiously awaiting the arrival of Grodd on The Flash. Well that moment has come and I have to say, it didn’t disappoint. They actually turned it into a truly terrifying experience. Shoutout to my man Cisco for the C.H.U.D. reference although I’m a little disappointed he didn’t go for an Alien/Aliens reference because I was definitely getting that vibe when Barry, Cisco & Joe were walking around the sewers. It added to this episode having a darker, horror movie type tone which is different from the other episodes this season. I especially liked the scenes with Grodd and Joe. While I had faith that Black Fatherhood would be able to make it out alive but it was touch and go for a while there. The scene where Grodd is making Joe point the gun at himself? Kudos to Jesse L Martin. We’ve seen plenty of scenes like that one before in TV and in movies and rarely have I seen it done so intensely. This is why solid actors/actresses matter. Martin gave us a side of Det. Joe West that we haven’t seen before. We’ve never seen Joe terrified like we did this episode. Martin nailed it and when you think about the logistics of the scene, he more than likely performed that scene solo considering Grodd is a CG ape. Truly an outstanding scene and acting. As I stated, we’ve never seen Joe terrified for his own life before. We’ve never seen that level of vulnerability from him because he’s always in “Dad mode” and being protective (Overprotective…but more on that later) of his kids. It was a nice change of pace to see Barry and Iris worried about him and needing to save him for a change. 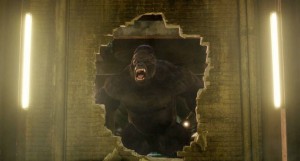 I was worried for a minute that we wouldn’t get to see Grodd in all his glory. I thought maybe they’d keep him in the dark because of a limited budget. I mean surely, with all they’ve done this season, a giant telepathic ape would be the final straw right? Nope. Not only did Grodd look great but he’s going to be a serious problem for Barry as he gets smarter. When Grodd caught Barry’s “super sonic punch” it reminded me of when Oliver tried to stab Slade with the icepick and Slade stopped him then grinned. I’m also glad that they embraced Grodd’s telepathic abilities and that this is going to be something else that Barry has to address whenever he faces Grodd. One of the interesting things to me will be what they do with the Grodd/Thawne relationship. Grodd calls him “father” (because “Wells” took care of Grodd and stood up to General Eiling experimenting on him. Can I just say, outside of giving robots intelligence, is there anything dumber for scientist to do than give a giant ape telepathy and more intelligence? I swear, Terminator and Planet of the Apes (and maybe a few zombie movies) should be required viewing for any scientist before they graduate with a PhD. Also, what was Grodd going to do with the gold he was having Eiling steal? Whatever he’s up to, we’re gonna have to pray for Barry. Grodd got hit by a train and not only shrugged it off but went on to get his King Kong on and climb buildings. Not a good look for Team Flash. I'm also glad they addressed the fact that Eiling does know that Barry is the Flash. For a minute there I was confused because Barry and crew said that Eiling didn't know him as the Flash but I thought Eiling did know. So it was good of them to clear that up. I'm also interested in where General Eiling and Barry go from here. Clearly Eiling sees Metahumans as a threat but he's pretty much calling a truce with Barry for now.

While watching the episode, I was cracking jokes about Iris getting in the way but I actually liked what they did with her this episode. She’s finally no longer in the dark and I like the fact that she’s upset at both her father and Barry for keeping this from her. She made a good point to Joe. Keeping her in the dark put her more in harm’s way than letting her know up front. Now to be fair to Joe and Barry, Joe’s overprotective nature extends to both Barry and Iris. Iris talks about who Joe didn’t want her becoming a police officer and to be fair, Joe wasn’t exactly thrilled with Barry running around as the Flash. And Barry’s not the kind to go against Joe when it comes to Iris. Not right, but I definitely see the other side. I think Iris overreached though when she lashed out at Joe for not telling her about how Barry felt about her. When it comes to their feelings for each other, both Barry and Iris have been lying to each other. Some people thought it was bad timing but I thought Barry was 100% right for flipping it back on Iris. She was clearly lumping in Barry not being upfront with his feelings for her with his lying about being The Flash. Barry had to hit her with the “Let’s not get ahead of ourselves here…you’re lying too.” I do hope that this means in Season 2 we get a more helpful and useful Iris. Even though she was brought into the fold this episode, she still didn’t have a lot to do. Her talking Barry through Grodd’s mind control was a bit forced and clichéd but it didn’t bother me too much. I just hope they don’t rush Barry and Iris together now. Cause while we know she’s still “with” Eddie… 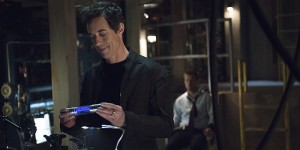 …Eobard Thawne is doing a pretty good job of crushing that dream for Eddie. Last week I asked who was the bigger cockblocker: Joe or Eobard. Well this week I think it’s Eobard by a mile. Instead of calling him the Reverse Flash we should call him “The Dream Crusher”. First he tells Eddie that he’s the Thawne that in history, never amounts to anything. How’s that for a confidence and self esteem boost? Having a distant relative from your future come back and tell you that you’ll never amount to shit is bad enough but then Eobard goes out of his way to tell Eddie that he doesn’t even get the girl. First he killed Barry’s mom and now he’s killing Eddie’s dreams.  What a monster.  It will be interesting see how Eddie reacts to the news that Iris in the end chooses Barry. I would think that he would maybe think Eobard is fucking with him but Eddie's always been insecure when it comes to Barry and Iris. One interesting thing that I noticed though was that with Wells/Thawne gone, there’s really no voice of reason (feels odd typing that) at STAR Labs anymore. Iris was able to walk right in on Barry still in his suit because Cisco took down all the cameras that Wells had put up. It didn’t even occur to Barry, Cisco or Caitlin to lock the doors and still be on their toes. It’s going to be interesting seeing how they deal with the lack of mentorship from Wells. Also, what is up with Wells and this other particle accelerator? What's his end game?