The Flash Review: All Star Team Up 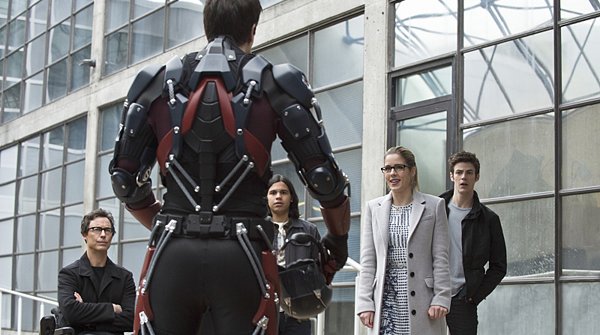 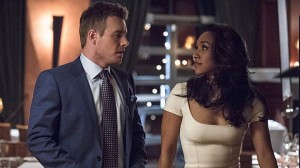 The great thing about this episode of The Flash is that it’s pretty much the follow up to the time traveling Barry did in Rogue Time. Remember when Wells said that Time has a way of balancing itself out? That’s pretty much what we see here. When Barry’s not focused on making changes based off the time traveling he did, the people around him are making the decisions they made in the other timeline on their own. Let’s take the Eddie-Iris-Barry love triangle. In the previous timeline, the thing that made Iris realize she was in love with Barry was Barry moving on and not following her around like a love sick puppy. I know some people think it’s wrong of Iris to only seem to notice Barry when he’s moved on but let’s really think about it. Barry’s timing has always been horrible. He’s in love with Iris but doesn’t tell her until she’s got a boyfriend she really loves. He’s constantly trying to force her to admit something that both of them have been in denial about for so long. It’s human nature to resist being forced into something, even if it’s true. When Barry is giving Iris space, she actually has time to think for herself and what she really wants. Take the scene when Barry is defending Eddie on the couch. Barry was genuinely trying to help Eddie but Iris got to see the “good guy” Barry who puts other people above himself. And that “Eddie makes you happy and I just want you to be happy” line pretty much sealed the deal for Barry even though he doesn’t know it. 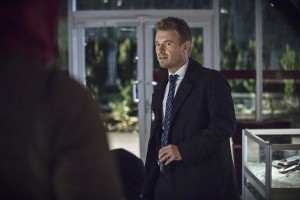 Now having said that, I have mixed feeling about how Iris deals with Eddie at the end of the episode. It seemed a bit forced and it wasn’t what Barry told her. She pretty much double down on her position that Eddie is lying to her and while that’s true, Barry gave her a legit reason for that. I know that they’re trying to lay the seeds for Eddie’s dislike of Barry to add to the Thane-Barry Allen rivalry but it just seemed forced. There were other hints of the rift in this episode and I don’t think the scene with Iris and Eddie at the end was needed. The beginning of this episode with Eddie and Joe being helped by Barry to stop crime laid a good foundation for Eddie becoming jealous. Eddie is an up-and-coming detective and he’s now seeing Barry pretty much make his job obsolete. Add in the fact that what’s tearing apart his relationship with Iris is that he’s keeping Barry’s identity as the Flash from her, and all the groundwork is there. I understand what they were doing with that scene at the end but I just don’t think it was necessary. They could have had Iris tell Eddie that she understand that his job means he’ll have to keep some things from her even if she doesn’t like it and that she’ll try to be more understanding. It would have been less heavy handed. 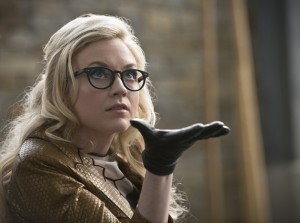 Another way this episode ties into the time travel from Out of Time, Cisco is starting to have memories of Wells killing him in the other timeline. I’m not sure why Cisco is remembering these things and no one else is. Maybe it has to do with Wells himself being from a different time as well. Either way, this is just like what happened in Out of Time. Cisco has pretty much figured out Wells is up to something on his own. The difference this time being, Barry and Joe have now brought Cisco and Caitlin into the fold. I liked the initial hesitation of Joe to bring them both in to. He was right to worry. There was no real way for Barry or Joe to know if Caitlin or Cisco were in on Wells’ secret. Wells has been helping Barry (more than that, he’s saved Barry’s life) and so a helping hand cannot be used as a barometer for good. 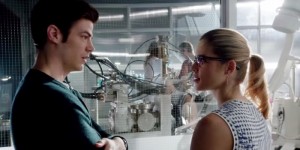 All that I’ve written so far and I haven’t even gotten to Ray and Felicity. While this wasn’t as good as when Oliver showed up on The Flash, I have to say, I love the bromance between Ray and Cisco. If the spinoff show is going to be called ATOM, then I hope Cisco gets to appear in a few episodes. Cisco and Ray were hilarious together. Add in Felicity (who just makes everything better) and its always a pleasure watching Arrow and The Flash crossover. It was a bit weird seeing Felicity move from sexual innuendo to flat out talking about her sex life with Ray (Can you imagine if she did that with Oliver? hahahahaha). Her line about Ray being “Barry in Oliver’s body” was hilariously accurate. Ray is the combination of Barry Allen and Oliver Queen. Felicity came out on top in that. I also just love what Felicity brings to the show. Her little “hacker battle” with Brie Larvan (Emily Kinney from The Walking Dead) was good mainly because of Felicity’s reaction. First there was her whole “she’s like my nemesis. I’ve never had one before. I kinda like it” then there was her “BOOM. Mic drop” when she stopped the mechanical bees (Bees that as Cisco put “Nobody got time for bees”). Felicity just brings another personality to both Arrow and The Flash that is so unique. She also brings in a different perspective that both Oliver and Barry need to hear. Barry needed to hear about the lessons she learned from dealing with Oliver and how she knew he was lying to her when he first approached her but she knew he was a good man and needed her help. Barry needed to hear that. Oliver Queen is the veteran hero in the TV universe but that also means his team are veterans at supporting him. So it makes sense that Felicity can give Barry a perspective that no one else can.

Weekly Black Fatherhood Moment: Eddie asking Joe when his opinions on what Iris should know would trump Joe’s and Joe telling him “When you marry her”.

This was a fun episode. There were a ton of funny pop culture lines thrown in. Any time you can throw in a Superman reference and a Six Million Dollar Man reference, you’re good in my book. If there’s any negative I had is that while I enjoyed the Cisco-Ray teamup, like on Arrow, Ray seems out of place. I think it’s becoming more obvious that Ray’s ATOM is going to be the center of the spin-off show and they’re doing everything they can to build him up a bit. I think he integrated better in this episode than some of his scenes on Arrow but he’s almost too big to not get more screen time. But that’s a nitpick and a good problem to have. I love that Routh has been so good as Ray Palmer. I should also point out that the effects used for the ATOM suit were amazing. This CW TV universe is turning into quite the form of entertainment.