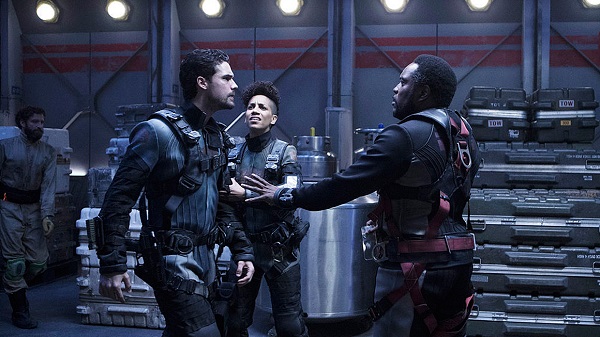 So far, the second season of The Expanse has improved on the first season by being more liberal with explanations while still maintaining the mystery of the show. More information about the protomolecule and Earth/Mars relationship have been revealed in the first three episodes than the entire first season. This makes for a quicker pace to this season and it’s paying off.

The Expanse has done a great job making the Martian military force a formidable opponent for Earth. We’ve seen the types of ships they have and it’s clear they are just as advance, if not more so, than Earth’s fleet. Avasarala explaining to Errinwright what would happen if war did end up breaking out helped to validate just how much trouble Earth could be in. To sum it up, Martian Marines spend their lives training for payback against Earth and if Earth doesn’t take them seriously, Mars will invade and win.

This point is driven home with Draper and her Marines later in the episode. Private Travis being picked on for being Earth born shows the animosity that Martians have for Earth. When Draper talks to Lt. Sutton, she even tells him that she has a real issue with them sitting around waiting and not taking the fight to Earth. In three episodes they’ve done a great job pinpointing where this hatred is coming from in Draper. But what really drove Avasarala’s point home was when Draper and the rest of the Marines came together stand behind Travis. First, Travis, despite being picked on, did not snitch on Draper for busting up his eye. Then it also shows that while they pick on him, they do still consider the private to be a loyal Martian Marine. It shows a level of family and bonding that this group has and that could prove dangerous for Earth to go against Martian Marines like this. 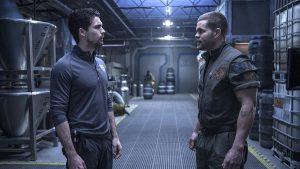 As rough around the edges as he is, Amos is a great complement character to Holden. He’s everything Holden isn’t and that means when you get them together, they form a pretty good team. Holden obviously wants to get information on the protomolecule in order to take down the people behind it. But when talking to Cortazar, he was hitting a brick wall because he was promising to destroy Cortazar’s purpose in life. Amos on the other hand, fed into Cortazar’s desire to talk about his work. This was a good cop/bad cop routine but what made it so intriguing was, Amos was the good cop while Holden was the bad cop. It’s a reversal that normally would be contradictory to their characters but in this case, it made a lot of sense.

In keeping with this season’s theme of not holding onto information, we get a pretty quick explanation as to why Cortazar is behaving so strangely and why the guards on the station were only armed with gel rounds. Even better, Cortazar becomes very talkative and we get pertinent information on how the protomolecule works. This explains what happened to Julie in season 1 and why there seemed to be a different behavior from those infected on Eros. Between the information Cortazar gives and what we hear on the Eros Radio Feed, a solid picture is forming of what we can expect going forward.

One aspect of The Expanse that I love is that the female characters get to be fully formed and aren’t defined by their sexuality or the male characters around them. This is why I was a little worried about the relationship developing between Holden and Naomi. In my opinion, Naomi is the real captain of the Rocinante and I worried that a relationship with Holden would damage her character. But this episode does a great job of affirming Naomi can separate a personal, sexual relationship with Holden and still stand by her own convictions. Holden wants Naomi to be just as upset at Miller as she is but Naomi flat tells Holden that Miller did the right thing and that Dresden was a mass murdered that deserved to be killed. And when Holden stays salty, Naomi heads out on her own, gets a drink, plays a little ball then goes dancing. It was the perfect example of “if you want to cry over this asshole being dead, do you. But I’m gonna going live my life.” Not having Naomi coddling Holden perfectly fits her character. When Holden needs a pep talk, she gives it to him but when he’s being unreasonable (and expecting her to be on his side because they’re sleeping together), she’s not just going to fall in line. Let’s remember, Naomi almost died when the Rocinante attacked Thoth Station. Holden is so consumed with himself and what Miller did, he didn’t even think that maybe she’s going through some things too.

Speaking of going through some things, I feel for Alex. He’s suffering from a lot of survivor’s guilt and he is now blaming himself for those Belters dying in that docking pod. There’s nothing more Alex could have done but he’s really beating himself up over it.

I’m happy that the show acknowledges something I noticed last episode, that Amos and Miller are very similar. One Amos is enough on the Rocinante, two would tear the ship apart. More than just their personalities being the same though, Amos fits in because he has Naomi to anchor him. Miller’s anchor is Julie Mao and getting justice/revenge for what happened to her and that’s going to put him at odds with what Holden is trying to do. That said, it doesn’t mean he’s not right. Amos had a bit of a "pot calling the kettle" moment when he told Miller "You keep picking fights with the wrong people." Part of me wants to believe that Amos said that knowing the same could be said about him. 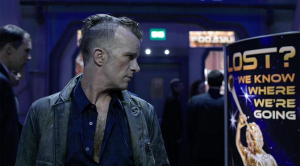 Miller’s best line was when he told Johnson “I didn’t kill him because he was crazy. I killed him because he was making sense." Miller and Johnson both know that Dresden would have been a problem. If Miller didn't kill him, that was going to open up even more problems. What makes Miller's conversation with Johnson at the end of the episode so good is that most of this episode conceals what Miller is thinking. I really thought that he was considering joining the Mormons on their pilgrimage. I knew he wouldn’t actually go but it really did see he was having a crisis of faith and that it was something he would do. But the reality is, he just wants to use the Nauvoo to destroy Eros. This set up was done really well because it means that Miller, who seemed out of it and lost the whole episode, was really plotting the entire time. When Diogo was playing the Eros Radio Feed, Miller realized what it was and that it's a problem and that the station has to go.

By the way, I need more Diogo/Miller team-ups. That kid is going to make Miller get attached to him and if he dies, that’s going to affect Miller even more than Julie.