‘Test Pattern’ Will Try Your Patience 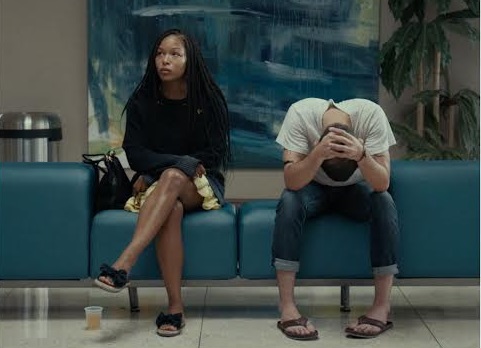 Brandon6.5
Ro7
Test Pattern focuses tackles the quiet part of the aftermath of a trauma out loud. It's a dramatization that raises more questions than it answers and is certain to leaving you feeling some type of way.
6.8

Shatara Michelle Ford’s directorial feature debut “Test Pattern” is a definite conversation starter, potentially divisive ones. This 82 minute drama centers Renesah (Brittany S. Hall) in the aftermath of a night out with her friend Amber (Gail Bean) that ended with her waking up in the bed of a man not her live-in boyfriend Evan (Will Brill).

The audience's perception of Renesha and Evan's relationship through witnessing a meet-cute in a bar that morphs into an awkward encounter at a grocery store that leads to a first date. This pair of opposites (Renesha is outgoing, high-achieving executive and Evan is a laid-back but charming tattoo artist) come together quickly but seem to connect deeply. A quick time-lapse shows this evolution via subtle changes; a new tattoo for her, a new mustache for him coupled with in-story flashbacks (from her) to pivotal moments.

All of this emotional building runs beneath the creeping horror of realizing the opening scene showing Renesha sitting on the side of a bed in a darkly lit room precariously holding a glass of water but visibly blurry and muddled is leading up to exactly what you think it is, her rape. Don't worry, "Test Pattern" isn't about to show her violation.

The Trauma's in the Details

Thankfully, Ford focuses on Renesha attempting to work through both her feelings and a staggering number of roadblocks to being able to preserve the proof of her assault and report her rape to the police. Her boyfriend Evan struggles with being supportive, understanding and controlling his mounting fury. Watching this unraveling in the context of a soul crushing slow burn turns the volume up on hurt simmering between the two.

There's an exacting attention to the detail in this narrative. Watching this couple try to navigate a system that feels purposely design to discourage will absolutely try your patience. It may even leave you wondering about some of Ford's choices. But by the midway point, it'll  be clear testing the audience is absolutely deliberate.

"Test Pattern" is built on a breadth of interconnected (and deeply emotional) issues like being frustrated, demoralized, repeatedly re-victimized, and dejected.

Between cinematographer Ludovica Isidori and music by Rob Rusli sonic and visual contributions, Ford's script and the strength of Hall and Brill's performances tackling the shortfalls of the medical and criminal justice system on sexual assault victims and how it can expose the cracks in even seemingly idyllic relationship lead to a highly impactful story. Buckle up because this slow-burn relies heavily on body language, inference and (an inevitable) lack of resolution.

By now you know, Ro is notorious (I accept this moniker) for suggesting films outside Kriss and Phenom's wheelhouse. We're still in a whole pandemy but that didn't stop her from suggesting the crew tackle a serious film while on the edge of exhaustion.

The end result is, a conversation that questioned some narrative choices while diving into the complexity of trying to figure out what being supportive to someone in the midst of trauma might actually look like.