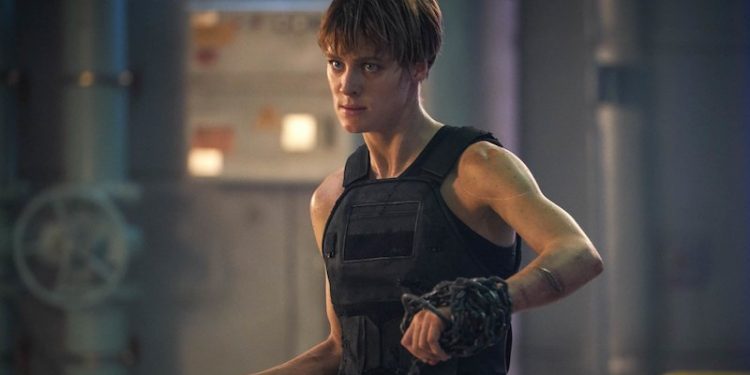 Brandon6
Kriss6
The film isn't a massive disaster like it could have been so that's a win. There's enough action to keep audiences happy for the most part but it's ultimately forgettable and while it sets up for continuing the franchise, you can't help but feel a sense of dread for more of these films coming
6
Terminator Dark Fate is a shell of Terminator 2. That may be enough for some audiences but it also begs the question of why are we back here? For all the talk that James Cameron has about other big franchises (never forget when he claimed Wonder Woman wasn’t ground breaking), his big tentpole films are incredibly formulaic with painful dialogue and one-dimensional characters. Terminator Dark Fate, to no surprise, is more of the same. The one shocking (and unforgivable) thing though is that it doesn’t feel like it has the same quality when it comes to visuals.
Now let’s be fair. Terminator Dark Fate isn’t directed by Cameron. Tim Miller is the director here and Cameron only wrote and produced. However, the Terminator franchise is one of Cameron’s babies and Dark Fate seeks to erase everything after T2 and so it’s very clear that Cameron wasn’t just some passive producer. He’s even admitted to having some “creative differences” and “battles” with Miller over some of the creative decisions in this film and honestly, you can tell. The plan was simple: Bring back Linda Hamilton’s Sarah Connor, bring back Arnold Schwarzenegger’s T-800 and then have Gabriel Luna as the new T-1000 type Terminator with Mackenzie Davis and Natalia Reyes being the only real changes. Now don’t get me wrong, there is more to it than that. The infamous “Terminator Time Travel Logic” strikes again. But overall, the same story beats of T2 are all here and no real new ground is broken.
This isn’t a bad film, it’s just fine. Audiences will watch it and enjoy most of the action scenes (while glossing over the parts that look really bad). Luna is great as a Terminator and Davis is as well as a "Cyborg" even though she's ultimately underused. In the end this film could have been much worse and disappointing and manages to escape that. But one can't help but wonder if at some point James Cameron just needs to walk away. Dialogue has never been his strong suit and between this and Alita Battle Angel, his scripts are really the weakest link in what could be much better films.

The Spoiler Review for Terminator Dark Fate is now up for Premium members.