With Spider-Man: Homecoming right around the corner, we take a look at why Peter Parker, particularly teenage Peter Parker, is such an important character. Appearing in 1962 in Amazing Fantasy 15, Peter Parker broke from tradition by featuring a high school student as the lead superhero. At the time, most teenagers were just sidekicks to the main hero of the story.

“With Great Power There Must Also Come Great Responsibility” 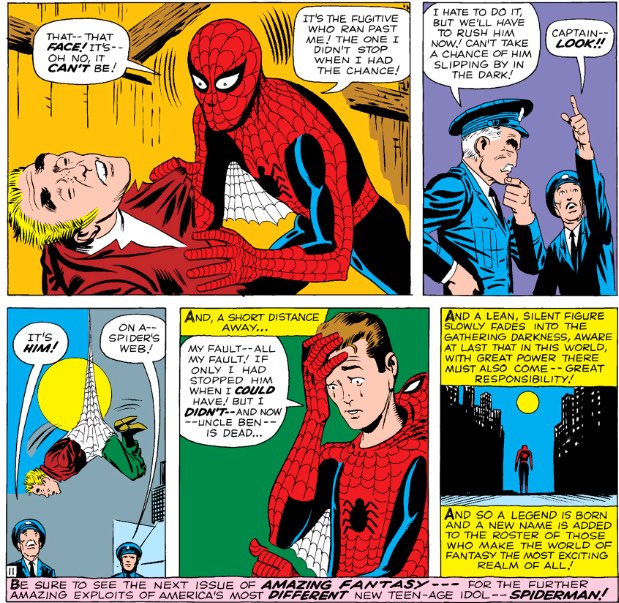 The early runs of Amazing Spider-Man holds up pretty well considering its age. The early issues are basically a gauntlet of what will eventually become one of the greatest rogue galleries in comics (for a full breakdown listen to our Spider-Man Rogues Character Corner). But beyond just the introduction of his villains, these issues also define why having a young Spider-Man is so important. The famous line "With Great Power There Must Also Come Great Responsibility” has been retconned to have been words spoken by Uncle Ben to Peter. however originally, this is just a line written as a narration on the final panel in amazing Fantasy 15. But starting with Amazing Spider-Man #1, we see Peter struggling with balancing the power he has and what his responsibilities are. It’s easy to see why Spider-Man resonated so much with young kids. Peter has the power of a superhero but has to deal with being teased at school, going to school and maintaining his grades, helping to support his aunt who is struggling to pay bills and more every day life issues. On top of that, he’s constantly surrounded by people who only like part of him not the whole. Flash Thompson bullies Peter Parker but idolizes Spider-Man. Betty Brant loves Peter but isn’t too sure of this Spider-Man character. The only person that treats Peter/Spider-Man the same is really J Jonah Jameson and that’s because he treats both equally terrible.

If This Be My Destiny & Spider-Man No More 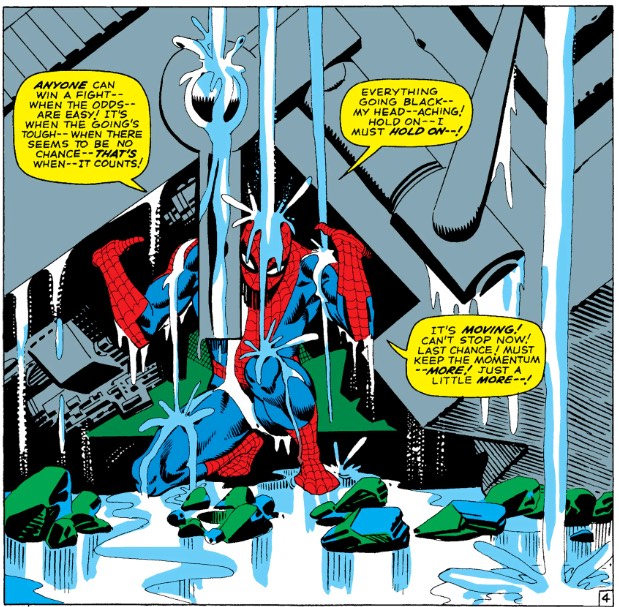 Issues 31 - 33 kick off an important mini-arc for Peter as well as introduce characters that will have a significant impact on his life. It’s Peter’s first day in college and we’re introduced to characters Gwen Stacy, Harry Osborn and Miles Warren. This arc doesn’t really focus on them and in fact, Peter spends most of these 3 issues rubbing Gwen & Harry the wrong way for ignoring them. But for good reason. Aunt May is sick and might not make it. We find out that after getting a blood transfusion from Peter, she’s been infected by his radioactive blood. This leads to a recurring theme with Peter: The people around him end up harmed or worse either directly or indirectly because of him. Peter as Spider-Man works with Dr Connors to develop a cure but the isotope they need is stolen by Doc Oct. We then get some great panels as an exhausted and nearly defeated Spider-Man powers his way through an army of enemies and almost being trapped and drowned. It’s basically Peter coming to terms with being a hero and digging deep to save the ones he loves. Speaking of who Peter loves. Aunt May finally succeeds in introducing Peter to MJ and it's an introduction that no one forgets in issue #42. 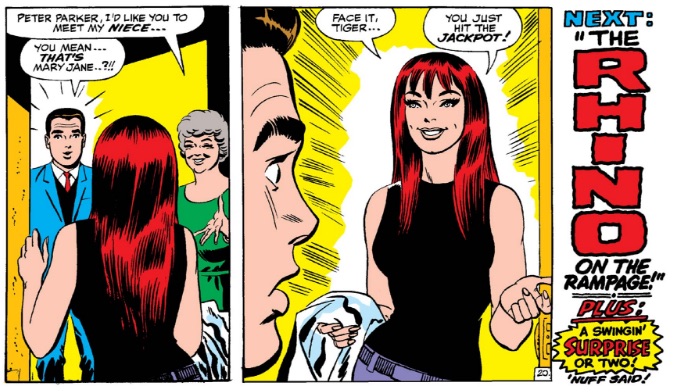 Issue 50 introduces Wilson Fisk, the Kingpin for the first time. But it also has Peter finally having enough and giving up being Spider-Man. He’s tired of not being able to spend time with his friends, the struggle for money to help his aunt and feeling completely unappreciated do to J Jonah’s campaign to turn the city against him. But after saving a security guard who reminded him of his Uncle Ben, Peter realizes that it’s his responsibility to help those in need.

The Death of Gwen Stacy 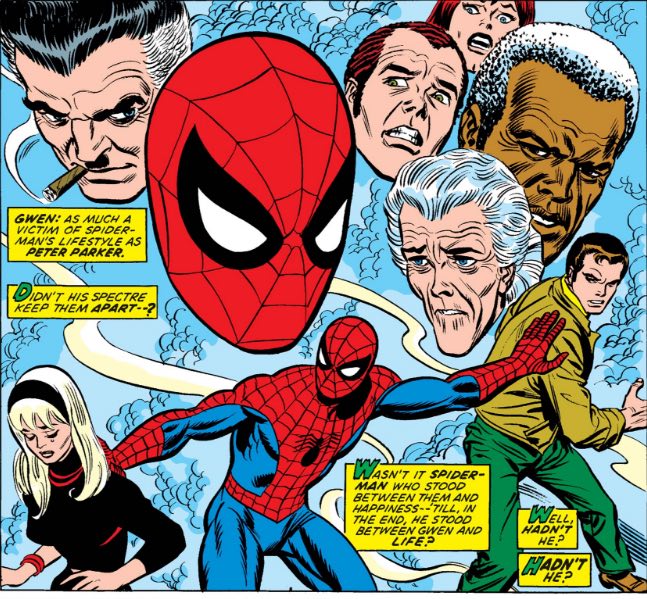 Make no mistake about it: Gwen Stacy is the love of Peter Parker’s life. Everyone (yes even MJ) is secondary. Some could argue that Gwen Stacy’s death is a case of “fridging a female character”. But unlike most cases where a female character is unceremoniously killed off just for a plot device for the main male character, Gwen Stacy’s death has been used to have serious impact in the Spider-Man universe. Obviously her death affects Peter but its also used to grow Mary Jane as a character as well as others. Plus there’s the obvious connections to Jackel’s motivations in the Original Clone Saga.

In addition to Gwen’s death, issues 121 - 122 also end with the death of Norman Osborn. Norman’s path back to being the Green Goblin is a sad one that involves Harry getting hooked on drugs. Harry then watches his father die as the Green Goblin in a fight with Spider-Man and well, like father like son. 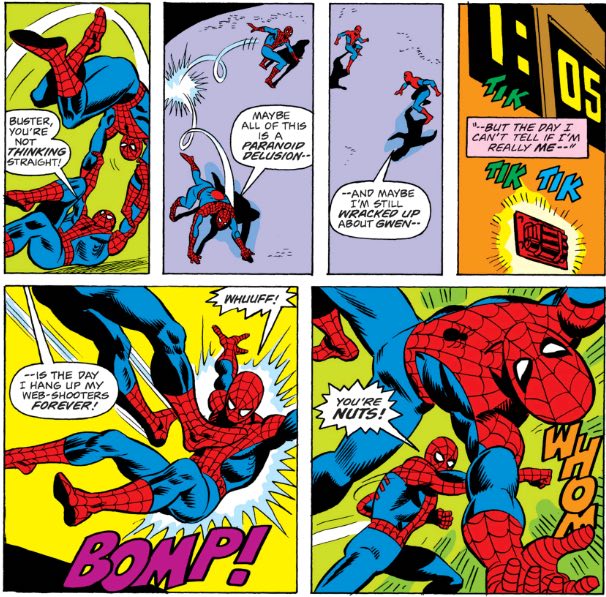 The original clone saga is one that has lead to some lasting consequences and controversies. Jackal creates a Gwen Stacy clone to further torment Peter/Spider-Man and others. If there’s one thing that there is no shortage of with Peter Parker is tragedy and torment. But Jackal takes it a step further in issue 149 and introduces a Peter Parker clone. While writer Gerry Conway had no intention of the death of the clone being ambiguous, issue 150 doesn’t really do a great job of solidifying that the Peter Parker we see alive is in fact the real Peter Parker. While there are definitely heated opinions on subsequent clone saga continuations, the original is still a great story that serves as a great end point for being introduced to Peter Parker