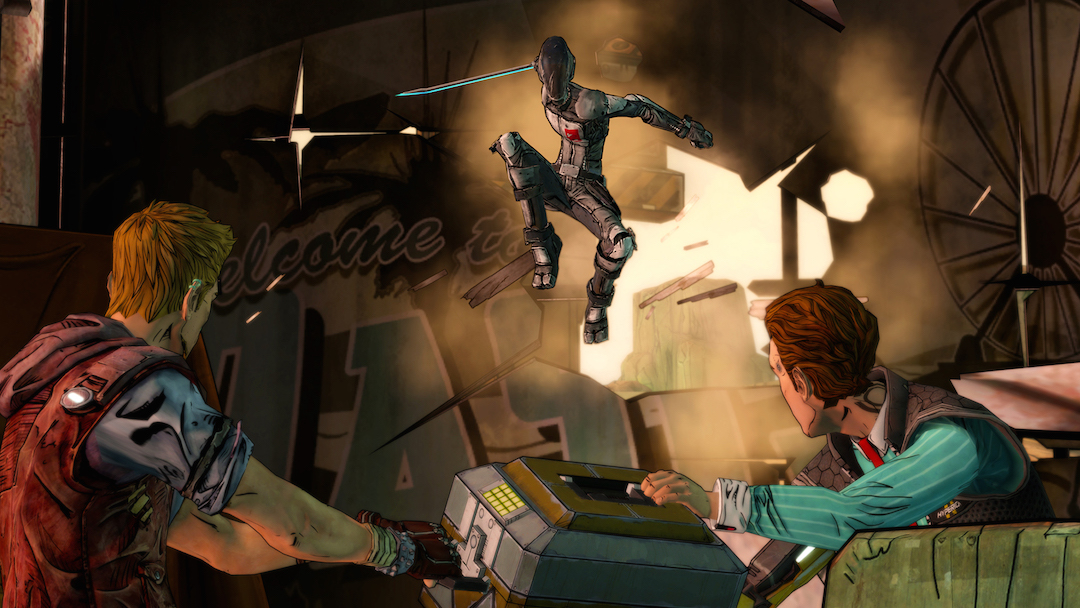 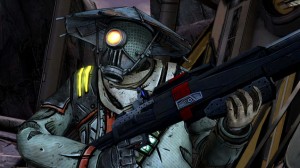 Up until now, Telltale games has been known for their award winning take on The Walking Dead as well as Vertigo Comics’ “Fables” with The Wolf Among Us. Their latest project, Tales From The Borderlands, is a distinctly different flavor than the dark worlds of The Walking Dead and Fables. The Borderlands series is known for two things, an ungodly amount of guns and its quirky style of humor. This style is definitely a shift from what we’re used to from Telltale, and introducing two controllable protagonists may seem like Telltale is biting off more than they can chew. Clearly, their first two projects were just appetizers as Telltale makes their way to the main course.

Tales From The Borderlands Episode 1: Zer0 Sum follows Hyperion employee Rhys and Pandorian Con-Woman Fiona as they first cross paths on Pandora. Rhys is attempting to screw over his new boss at Hyperion, and Fiona is just trying to run the mother of all cons. The episode opens with Rhys being captured by a bandit, and is asked to tell his version of the story. Without spoiling too much, Rhys is a middling Hyperion employee who is trying to move up in the corporation. He is screwed over by his rival and new boss, Vasquez. He tries to retaliate by screwing over a deal Vasquez has going down on Pandora. This is where we find that the bandit has also captured Fiona, and the bandit asks her to tell her side of the story. Fiona tells the bandit how she, her sister, and the closest thing she has to a father figure were going to run the mother of all cons on none other than Vasquez. This is what brings our two playable protagonists together, and it makes for an interesting storytelling mechanic. There are times during this episode when both characters are clearly lying, but it’s left up to the player to decide what’s true and what’s “embellishment”. 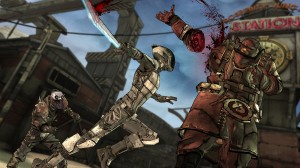 What really helps make the story is how well Telltale captures what it means to be in the world of Borderlands. The brilliantly capture the look, feel, and humor of Borderlands for a surprisingly immersive experience. The characters feel like Borderlands characters. They’re quirky, they’re different, they’re unique, and they stand out. Hyperion feels like a sociopath version of Initech from Office Space, with Vasquez as the murderous version of Lumberg. Vasquez, voiced by Patrick Warburton, wastes no time debasing Rhys, and spacing a man within his first ten minutes in the game. Beyond Hyperion, Pandora feels just like wretched hive of scum and villainy that we’ve grown to love. It was also refreshing to see what someone who isn’t a badass vault hunter deals with the hazards of Pandora. Rhys and Vaughn are paper pushers, and freak out over running over a skag. It’s a stark contrast to Fiona, who grew up on Pandora. She’s no vault hunter, but that doesn’t make her any less equipped to deal with the savagery of Pandora. The player has the option of stopping mini psychos from stabbing a poor guy only to take his money while he dies. “A girl’s gotta eat,” indeed. Fiona relies on her wits to get by, while Rhys and Vaughn just try not to die. It was a bold move for Telltale to go this route with dual protagonists, but so far it’s working just fine. 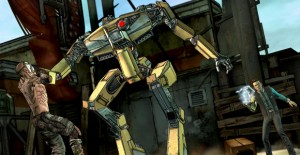 It wouldn’t be a Borderlands game if there wasn’t combat, and Telltale has really stepped it up in that department. Combat has vastly improved since Telltale’s “The Walking Dead”. Controls respond more smoothly than before, and the Quick Time Events themselves are smoother for it. There’s a moment in Rhys’ story where he summons a Loader Bot to dispatch a group of bandits that seek to rob him. What makes this sequence cool is not just the combat with the Loader Bot, but also customizing its loadout. There are only four combinations, but each has its own unique play-style. The riot shield, for example, is used as a bludgeoning object which has the players swipe the screen to pimp smack its prey. Grenades are wound up with rapid button presses and launched with a different command, giving each weapon its own unique feel. We really have come a long way from Lee awkwardly sniping bandits back at the motel. 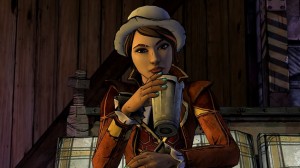 My one nitpick about this game would be its soundtrack. Borderlands games are known for having top tier soundtracks, and Tales From The Borderlands doesn’t have that same wow factor. The soundtrack isn’t bad, it’s just forgettable. When Rhys and Vaughn land on Pandora, a really cool song plays in the background that really adds to the badassery of the moment… and I couldn’t tell you the name of the song sans Google if I tried. The music fits, it works really well, but at the same time it’s very forgettable. The graphics looks just like Borderlands 2, down to the art style, which only enhances the immersive experience. Tales From The Borderlands is just another smash from Telltale that I’m thoroughly enjoying, and I can’t wait for the next episode. Fans of Borderlands, or old-school point and click adventure games like Monkey Island should enjoy it as well.