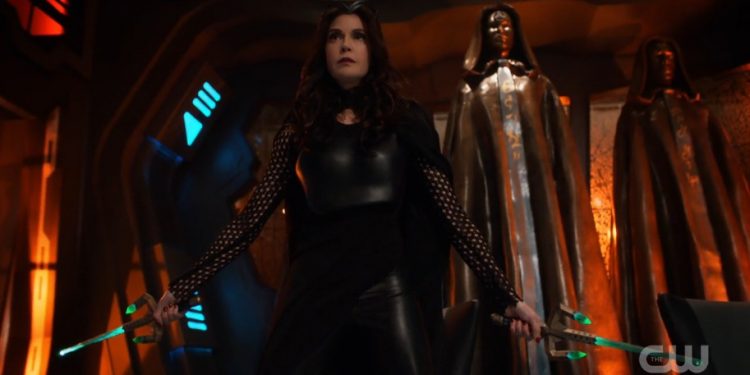 Due to a mixup, we are bringing you two episodes in one this week.  In Star Crossed, Mon El's long standing non-secret, his royal heritage, is revealed by the arrival of his parents Lar Gand and Rhea (Kevin Sorbo, Hercules and Terri Hatcher, Desperate Housewives), who want him to return home and assume the throne.  Meanwhile, Winn learns that his girlfriend Lyra (Tamzin Merchant, Salem) has been playing a long con when she sets him up for an art museum theft.

In Distant Sun, the president (Lynda Carter, Wonder Woman), gives J'onn an unusual order to avoid future contact with Mon El's family on the ship orbiting earth while Kara deals with the intergalactic bounty that's been placed on her head by his parents.  Alex and Maggie hit another relationship hurdle when they run into Maggie's ex-girlfriend Emily (Hayley Sales, Cedar Cove) and Alex decides to prove how comfortable she is with Maggie's past, only to discover she doesn't know Maggie as well as she thought.