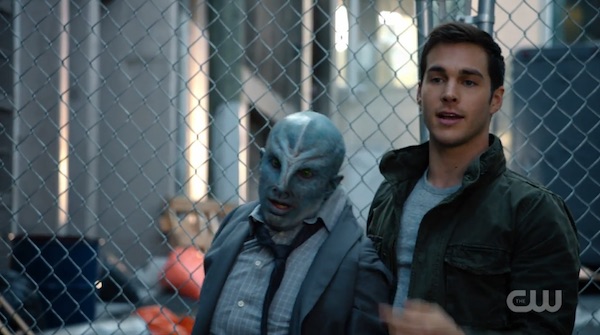 A climate change scientist encounters an Angonian parasite who bonds with him, giving him the ability to drain the energy out of any being he encounters.  James makes his debut as the vigilante Guardian.  Kara scolds Mike about his decided lack of morality.

This episode was tough to watch and I am really not sure why.  It may be easier for me to focus on what really worked and what didn't. 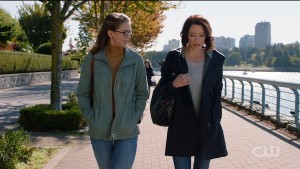 Chyler Leigh KILLED this episode.  For the first time since the show debuted, I enjoyed every scene she was in.  Her journey to self discovery regarding her orientation was so well done.  When she breaks down in Kara's arms feeling rejected and humiliated, I cried and hurt for her.  It was literally the first time I wasn't actively wishing for her death. I appreciate how the show handled her coming out, as well as Maggie's response, which makes perfect sense.  Even Alex's reaction to Maggie's rejection made sense.

Mon-El never fails to be entertaining.  I appreciated him trying to find his own way and keeping it real even when attempting his superhero antics.  Chris Woods is doing a great job as a lost but irreverent alien trying to live in Supergirl's world.

The opening bar sequences with Kara, Mon-El, J'onn and M'gann were fun!  Kara drunk was easily the second best moment of the episode behind Alex's story.  J'onn and M'gann bonding was sweet, which made what happened at the end (and what looks to be happening next week) even more heart breaking.  The training sequence with Kara and Mon-El was well done and a nice callback to season 1 when Alex as training Kara on how to be a better fighter.

What Did Not Work 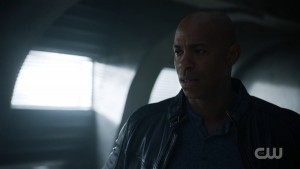 Everything else.  Guardian has a cool outfit and Winn seems to have figured out his design patterns so they don't look to be created by a spiteful toddler, but as a carryover from the previous episode, Jimmy's logic and demands made him decidedly less likeable.  The logic still doesn't track for me.  It doesn't work for me.  Now we have a secret in play, and I am never a fan of secrets of things that are important like this.  Kara continuing to be a bit prejudiced and slightly bigoted is not endearing her character to anyone.  I appreciate a more mature Kara, but I don't know if the writers don't realize that more mature doesn't mean more of an asshole.  The Parasite had promise but his quest for educating others about climate change in the face of climate deniers who sounded very much like members of Trump's new cabinet fell flat for me given the incident last week.  Mon-El getting gripped up by Cadmus didn't make a lick of sense-since when did they get wind of him?

The episode felt a little all over the place, which was disappointing given the first five of the season were pretty strong out the gate.  I am not worried because compared to season 1, this episode was just fine.  It is still not as good as the previous episodes.  I am looking forward to see what the plans are for Mon-El at Cadmus as well hopefully seeing the fate of Jeremiah Danvers, the evolution of the relationship between Alex and Maggie, and the impact of the truth about M'Gann on J'onn and that relationship.