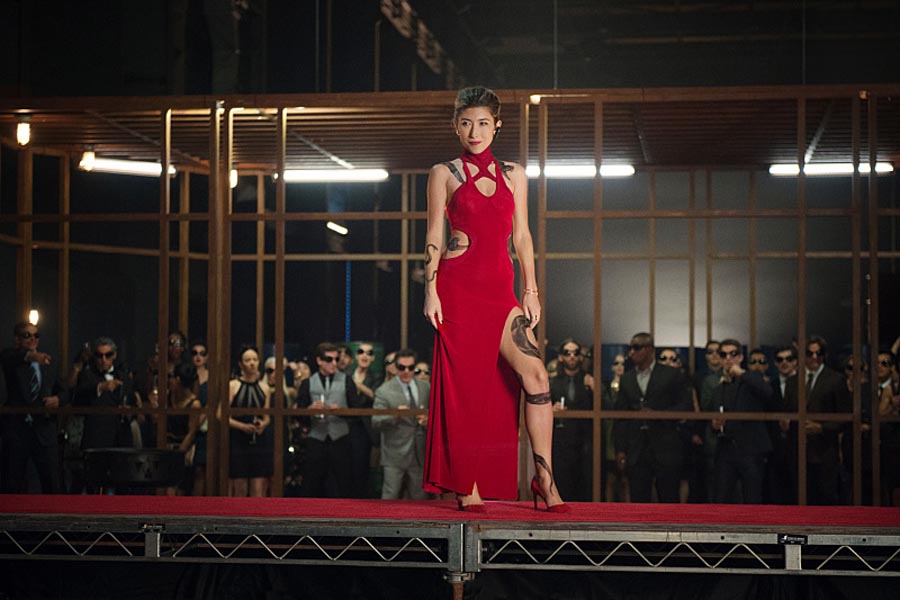 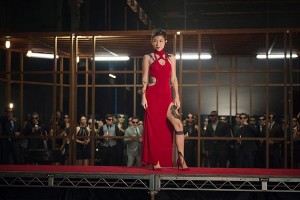 We head into week 4 of Supergirl on CW and it has not failed to entertain.  This week's villain is Veronica Sinclair, a.k.a. Roulette (Dichen Lachman, Dollhouse, Agents of S.H.I.E.L.D.), owner of an alien fight club, snatcher of wigs, and home to the baddest tattoo I've seen in a while.  (I will find an artist who can do this for me...after I find the job I plan to retire from.  Then on day 91 I'm going to strut into the office in a pencil skirt with a sleeveless top and rock that bad boy like I own the place.  But I digress.)

The storyline focused on all the alien survivors stranded on Planet Earth.  In the lightest survivor storyline, we see Mon-El convince Winn to be his wingman and take him out.  A night of boozy hijinks and bonding ends poorly with Mon-El inadvertently starting a bar brawl that results in injuries.  Mon-El recognizes that he's not being protected from the world-the world needs to be protected from him, particularly since he doesn't know his own strength.  Kara, a survivor herself, finds her original purpose for coming to Earth come to fruition by the arrival of Mon-El.  She can't help her cousin, but she can help this newcomer, a fellow alien who is also the last of his kind, adjust to his new home.

In our villain of the week survivor story, Kara finds herself speechifying about the moral bankruptcy surrounding the alien fight club.  She causes several million dollars in damage to a city road (cause why not?) to confront Veronica, who is deeply unimpressed, particularly since she watched her first round draft pick, Draaga, knock Supergirl on her ass with little to no effort.  After hearing Kara's 8th grade speech about how wrong she is, Veronica proceeds to read Kara for filth...and it was GLORIOUS!  Invoking the lessons learned from Michael Vick (because the shade never seems to get old), she lets Kara know how naive she is and how much she isn't worried about her.  Since this is Supergirl's show, we know she will claim the moral and actual victory (which she does) and rally the wronged aliens to her causes (which she does).  Kara's speech had nothing on Veronica's read though, which is only solidified by Maggie and Alex having to release Veronica shortly after her arrest.  As she says, it pays to know people, and Supergirl isn't ready for the Big Leagues just yet.

The most powerful survivor story of the episode is that of J'onn and M'Gann.  J'onn is thirsty for a connection with a fellow survivor of their world, which is understandable given the fate of his planet, his family, and his people.  He visits M'Gann on several occasions, bordering on if not crossing the lines of street harassment, to make that connection.  His people take The Bond, where they connect on a spiritual, mental, and emotional level.  They share memories, feelings, and experiences without the need for words.  M'Gann is hesitant.  She recounts how she survived the genocide of Mars.  She tells J'onn about how the prisoners were treated, and of how a White Martian took pity and decided not to kill anymore and engineered her escape. In the course of their investigation, Kara and Alex find that M'Gann is participating in the alien fight club, although she doesn't fight to the death.  J'onn confronts her several times, even though she warns him to stay away.  She sets him up, and Veronica has her goon squad taze him for a match she is sure will bring her a great cash windfall-Martian on Martian.  Veronica wants it to be a death match, and M'Gann almost obliges, until she receives forgiveness and absolution from J'onn.  He believes she's participating in these matches cause she is punishing herself for surviving.  We later learn that she's actually punishing herself for her role in the genocide-the end of the episode reveals she is a White Martian. (If you didn't see that coming based on her description of her last days on Mars,  you were NOT paying attention.)

I absolutely loved J'onn and M'Gann's story here.  Even though the reveal of M'Gann being a White Martian was very evident early on in the episode (you didn't have to watch Young Justice to know it early on based on the story she told), the desire for connection was so evident in both of them, and M'Gann's resistance to J'onn's kindness was understandable.  The theme Daniel James Chan created for J'onn and M'Gann was sweet and haunting.  Mon-El and Winn provided a great counter balance to the heavy nature of the Martian story.   Veronica Sinclair is a formidable adversary, and I certainly hope it isn't the last time we see her. 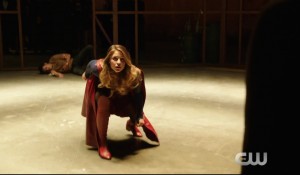 The major drawback of this episode, surprisingly, is Supergirl herself.  Kara's plight to become a recognized reporter is actually background noise.  Aside from the occasional check in, I have no vested interest in that part of her life.  Her attempt at giving Mon-El a pep talk fell flat (Your prom?  Seriously?  He doesn't even know what a prom is.).  It was used as a way to allow Mon-El to provide Kara with information she would need in the final "battle" if you will, but herein lies the problem.  For a show that is supposed to be about Supergirl, she was the least interesting character this episode.  What scares me is that aside from rolling my eyes just as hard as Veronica did when Supergirl tried to confront her, I didn't really miss her when she wasn't on screen. Your lead character should not be the least interesting thing about your show.  I'm hoping that some of what she experiences this year will help her become less self conscious and flighty because Melissa Benoist, at least from interviews I've seen with her, is not a flighty person.  Last season's episode "Falling" showed us she has the chops to pull off a more serious portrayal.  That is not to say we need to turn Kara into a version of Oliver Queen, but we are ready for her to start acting like a grown up.

A final word-during my online watch, people seemed to get the impression that the chemistry between J'onn and M'Gann was sexual.  I will eat my hat if I am wrong, but I did not take that away from this episode.  This felt like a man who for 300 years thought he was alone in the universe discovering he was not indeed alone and longing for a taste of home, the familial bonds he once shared with his people.  I sincerely hope they don't take it in a romantic direction, not because of the dynamics on Young Justice, but because it doesn't fit for the narrative they've created thus far.  Given M'Gann's true identity, I'm not sure that would EVER fit.