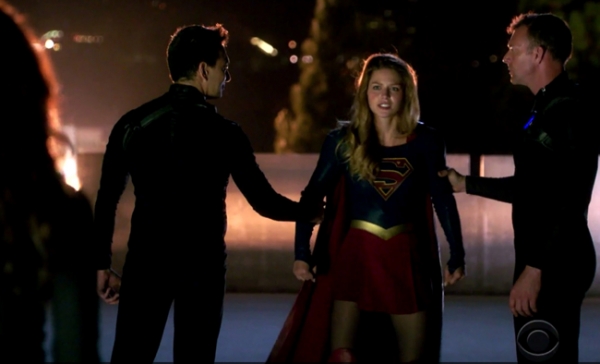 This episode picks up where the last one left off with the confrontation between Astra and Kara.  Astra pulls Hank's kryptonite knife on Kara, but it doesn't seem to affect Astra.  As it turns out, Astra and company have constructed devices that shield them from the effects of the substance.  Kara thinks Astra is there to kill her, but as it turns out, Astra is attempting to recruit her to their side, apparently in a bid to save Earth from the same fate Krypton.  Astra continues to try to recruit Kara, resulting in Kara capturing and jailing Astra, who shares with her that her mother used her to arrest Astra and doomed their home.  Meanwhile, Cat attempts to fend off a hostile takeover of her company from devious board members with the help of Kara, Jimmy, and Winn.

This was a great episode to lead into the holiday break.  Fortunately, unlike the other shows that are on break this season we will not have to wait too long to find out the resolution of the cliffhanger that had Non and Kara going head to head.  Oh yeah, did I forget to mention that Zod's right hand man is Astra's husband in this universe?  Well he is, and he is petty...and it is everything. 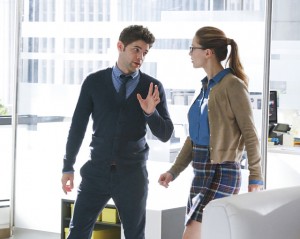 We're All In This Together: Cat enlists Kara's help to figure out who hacked her emails and what their end game is.  Kara recuirts Winn and James.  The Scooby gang get together in their secret hide out and start going through Cat's printed emails.  Kara overhears the board's chair, Dirk Armstrong, discussing with other board members how they will use this opportunity to push Cat out of her company.  With a name like Dirk Armstrong we knew he was going to be an asshole.  The gang enlists Lucy's help as a legal expert to figure out what information they need on Dirk to help Cat keep her company.  It was great seeing the gang work together, even while Kara was dealing with the emotional fallout of the confrontation with her aunt.  They supported one another, and you could see the bonds of friendship among them becoming stronger.  We even saw Lucy take part, and I was glad to see that they used the character in a way that made sense instead of a plot device that was poorly enacted around a forced love triangle.  James and Winn even had a great moment where James called Winn out on his feelings for Kara, apologized for how his behavior with Kara might have made Winn feel, and encouraged him to take a risk for the person he cared about.  The way this storyline was written and acted made me truly believe these people were good friends who cared about each other as well as their boss, who really has not to this point given them any reason to care about her.

I'm Every Woman:  It took 8 episodes to get here, but we finally get to know Cat as a multilayered person and not just someone who is hateful because she can be.  Some people have not had a problem with how she is written.  I have not appreciated at all the way Cat was written during the first part of the season because it was unnecessary.  You can write a woman as assertive, aggressive, and business savvy without resorting to the trope that she is a cold, unfeeling bitch.  They did not do this well early on.  They did it perfectly during this episode.  We learn that Cat shot her shot with Idris (because to be honest, if I had that shot, I'd shoot it too-I ain't mad at her at all), has expensive tastes, and doesn't like Lois Lane very much.  The bigger reveal is that Cat has an older son that she lost custody of because building her empire kept her from being the mother she wanted to be.  The emails show she's been sending large sums of money to help support her son, and in order to save him from the media frenzy that will impact his life when it comes to light, she decides to step down.  We finally get a nuanced performance from Calista Flockhart as Cat, a woman who is largely successful but whose success came at great personal cost.  We also get a woman who is smart enough to piece together the events of the last 8 episodes to deduce that Kara is Supergirl, and who is not at all fooled by the glasses.  I appreciate Cat figuring it out for herself instead of it being one more person Kara decides to reveal herself to.

I Been In the Right Place, But It Must Have Been the Wrong Time:  Astra's initial attempts to recruit Kara fail, and she decides to call her out in public, letting the world know there is yet another flying alien in their midst.  Kara's emotions get the better of her and she attacks her aunt in public, fighting through the air of the city, tearing up a few buildings in the process.  Kara bests Astra (a little too easily as Alex later discovers).  Astra tries to appeal to the closeness she and Kara once shared, and we see in flashbacks that they were very close, each holding on to a piece of a spy beacon that Kara could use to contact her aunt who was on the run at the time.  Astra reveals news that devastates Kara-Alura used her daughter to capture her sister.  Astra also tries to convince Kara that in doing so, Astra and Non's efforts to save their planet by any means necessary were thwarted and Alura's actions led to the destruction of their planet.  While it appears that Astra was telling her niece the truth, her actions were a ruse meant to distract the DEO and Kara from the real plan, which involved an assault on Lord Technologies.  This was really well done.  We had several action sequences with really good acting performances by Melissa Benoist and Laura Benanti.  Kara is so conflicted-she was so close to her aunt, but was made to believe her aunt was an evil indiscriminate murderer and her mother was pure.  Now with the reveal from her aunt, all but confirmed by the holographic projection of her mother, she is not so certain that she knows what she thinks she knows.  The hits keep coming, and I get the feeling Kara is going to crack soon under the pressure.  With all the turmoil her arrival on Earth has brought her, she at least had the reassurance that she knew who her mother was.  Now she doesn't even have that.  While her aunt was truthful, her truth was a ruse used to keep Kara from seeing her real end game.  Which leads us to... 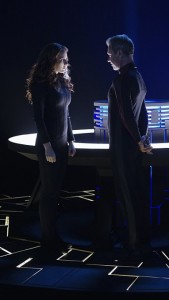 Exit Light, Enter Night: Non and the Fort Rozz gang arrive at Lord Technologies.  Lord shows up with a couple of security buddies and a neat gun that fires a chemical over the eyes of a Fort Rozz prisoner who was attempting to use his laser vision. He's obviously smelling himself.  If this guy isn't an allegory for Republican hubris I don't know what is.  Non takes out the security personnel and hems up Lord just as the DEO arrives.  Non orders the death of the DEO agents because he can.  The Fort Rozz prisoners promptly begin snapping necks like twigs. The DEO agents attempt to use the kryptonite guns on the prisoners, but their shields are preventing them from being effective.  Death and carnage abound.  One of the prisoners fights Hank and you see the moment on his face when he realizes this guy isn't human.  He makes the mistake of commenting on it.  Hank confirms it with some glowing red eyes, rips his shield, then shoots him with the kryptonite gun. This entire fight sequence was well done, and exciting.  While Alex tends to an injured soldier, Non prepares to kill her when Kara shows up and pushes him back.  He comments on the presence of his niece, and she, full of fury, grief, and betrayal from everyone in her life, tells him he's going to wish she had died on Krypton.  The scene and episode ends with them going head to head.  This is one of the best fight sequences we've seen on this show.  While the majority of it was the poor DEO agents getting broken in two, the pacing, tempo, and energy of the scene kept me pulled in.  We are seeing the stakes build.  We don't know for sure that Astra is truly trying to save Earth, and we know that methods to further a cause can sometimes go very far to the left.  Non is evidence of this.  He is ruthless.  He loves his wife, and will not hesitate to kill if he feels that her way isn't working-and this includes Kara.  He's going to be a formidable enemy, and I cannot wait to see the outcome of their battle when we come back from the holidays. 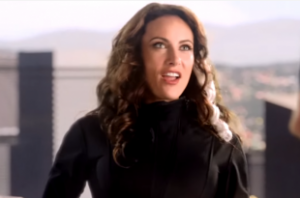 You're Into a Time Slip:  Dear CBS-if you are going to take on an action/adventure comic property, you have to be willing to put the money into it.  This includes money for strong CGI, stunt, and wire work.  I am so glad that the fight between Astra and Kara had decent dialogue because watching them floating precariously on those wires like they had absolutely no control was super painful.  It was so distracting that a few times it took me out of the action and the story.  It actually reminded me of classic episodes of Doctor Who, when it was so evidence that they were doing special effects that weren't so special.  I cannot handle every week the show's struggle with portraying floating Kryptonians.  Do Kara and Astra not have a good handle on the flying/floating thing?  Is their equilibrium still off because of the time spent in the Phantom Zone?  What gives?

This was a strong episode overall.  I was a little worried about the hostile takeover of CatCo but it served to show the Scooby gang growing stronger as a team and as friends, as well as flushing out Cat Grant as a more three-dimensional person.  We learned Astra's imprisonment and Alura's role in it was not as black and white as we were led to believe.  We get to come back to a showdown between Non and Kara, as well as the emotional fallout from the revelations of this episode.  It's going to be a long two weeks until the show comes back but I cannot wait!