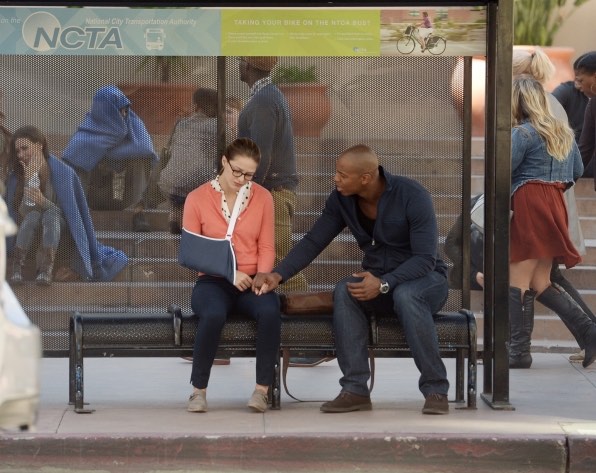 THIS WAY BE SPOILERS! 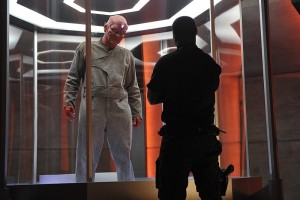 Kara suffers from a photovoltaic burnout in the aftermath of her fight with Red Tornado, rendering her powerless. Jimmy explains that it happens to Superman as well and he usually needs a few days to recharge his batteries.  While they are having this talk about an aspect of the superhero universe I do not approve of at all, an earthquake hits, unleashing all manner of destruction and terror on the city.  Kara must watch in pain (physical, because she broke her arm in the chaos, and emotional, because she is helpless to act) as people around her suffer and die and she can do nothing to stop it.  Meanwhile, Alex and Hank have to lock down the DEO facility because a prisoner, Jemm, Master of the Faceless Hunters, Conqueror of the Twelve Worlds, cousin to Jeriba from Enemy Mine (I added that last part), escapes.  Jemm is huge.  Jemm is strong.  Jemm has a diamond on his head that looks strangely like an Infinity Stone (but we won't go there).  He has the ability to control the minds of others outside of his special disrupter shielded cell-which the power loss has just rendered useless.  Once he uses up your mind, he crushes it like a soda can.  Alex is now trapped with this guy and Hank, the man she believes murdered her father. 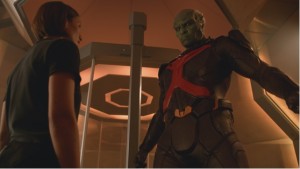 Gimme Gimme Gimme (A Man After Midnight): I'm going to jump right in.  J'onn J'onnz baby!  MARTIAN MANHUNTER BABY!!!  I see why the stunt effects and the special effects have been lacking the first six episodes.  They saved all the money for his transformation.  And it looked fantastic!  Faux Hank (as he will be referred to in this episode review) was the alien Jeremiah and real Hank were sent to find and kill.  The DEO thought that J'onn was part of the Fort Rozz prison break.  As it turns out, J'onn was an innocent, a refugee whose world had been destroyed.  Jeremiah realized this and gave his life to protect J'onn.  Hank was also killed.  It is unspoken, but we are to infer that the real Hank murdered Jeremiah because Jeremiah was protecting J'onn, and J'onn killed Hank.  J'onn promised Jeremiah he would look after his family like they were his own.  Alex now knows the truth of her father's death.  But J'onn swears her to secrecy, even from Kara.  When we first saw Hank's red eyed treatment, I thought he was The Cyborg, a nemesis of Superman.  It would have been a good reveal-having Kara fighting threats on every front.  This reveal was better.  They are building the universe, and it looks very promising.

There is a Light That Shines: Jemm is wrecking shop in the DEO-and it is wildly entertaining.  While he started off as an occasional ally of J'onn J'onnz in the comics, in this episode he is basically a villain of the week, who gets his neck snapped by J'onn to save Alex.  Jemm quickly dispatches the DEO agent pursuers who were working with Hank to apprehend him (henceforth known as Red Shirts 1 and 2), and later takes out another agent who is working with Alex to apprehend him (henceforth known as Red Shirt 3).  He would have been a very entertaining villain to watch and track throughout the series.  However they seem to have other plans in mind on that front, and we had to bid Jemm adieu. 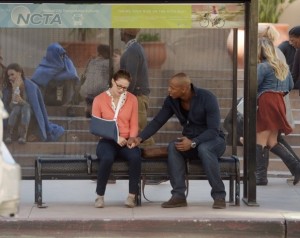 I've Got a Theory: My theory is this-after watching the first couple of episodes back, the producers realized they had Melissa Benoist acting like a woman child and decided to step up to the plate and do a better job pulling a good performance out of her.   Additionally, they worked even more on the writing and dialogue. It worked.  Kara was portrayed less like a wide eyed ingenue and more like a person who had been ripped of their identity and had to figure out how to deal in a chaotic world.  While she did engage in some pretty inappropriate bonding with Jimmy, I liked her performance this episode.  It added a more mature aspect to her character that was sorely needed.  They also had some great lines and performances from Maxwell Lord and Winn.  Winn loves Kara.  I'm just glad Winn isn't afraid to call Kara out on her mess.  She was wildly inappropriate with Jimmy.  Jimmy is about to buy really pricey real estate with a woman-so why was he acting like he forgot he signed off on the workplace sexual harassment videos and was all hugged up on Kara?  Winn is the perfect Ducky.  Maxwell Lord dropped those harsh truths coupled with some good old fashion 'Murica seasonings.  While heading up relief efforts, he continues to slam Supergirl.  Kara, feeling defensive, tries to defend her alter ego, and Maxwell drops the best bars of the episode.

“Supergirl lulls us into complacency.  She fools us into thinking she’ll save us and renders us incapable of saving ourselves.  Like heroin or the welfare state“

I'm waiting for him to announce he will be Donald Trump's running mate in the 2016 presidential race.

Stupid Girl: Yes Alex, I am talking about you.  Why in the name of all that is good and holy would you decide to have a confrontation with Hank Henshaw about your father's fate when your facility is locked down and a psychotic, telepathic, Hulk of an alien is running loose and free?  Can we table that conversation for when we are not at risk of all the prisoners locked in the facility being released?  Oh yeah, that's right, J'onn had his share of stupid this episode.  He took Red Shirt 1, who just happened to be the head of security with information about the release codes for the prisoners, with him to confront Jemm.  Since dude's name is Red Shirt 1 (I know it's Reynolds, I'm calling him Red Shirt 1 cause he had little to no lines and died quickly and painfully), of course he got murdered-after Jemm read his mind and got everything he needed to unleash hell in the facility.  Then, even though J'onn tells her to keep her ass put while he looks for Jemm, Alex takes Red Shirt 3 (I didn't bother to learn his name-that actor always dies in everything I've seen him in) and proceeds to get him killed.  Then she locks J'onn in a computer server room-because she has the access code.  She barters with Jemm to give him the code to keep him from releasing the prisoners.  Jemm proceeds to kick her ass and only some shadow ass kicking from J'onn coupled with a lovely neck snap saves her from continuing to be tossed about like a rag doll.  I don't condone violence against women, but Alex got everything she deserved for being so damn stupid this episode.  Time, place, and manner ma'am!

I Believe In You and Me: Kara decides she can no longer sit by and watch the city fall apart.  So instead of volunteering at the relief tent, Kara strolls her one armed self over to a liquor store that is promptly being robbed by a stressed out gunman.  She talks him down with an inspirational speech, which is shown in tandem with Cat giving an inspirational speech to inspire the city.  It was cheesy.  We had almost made it through the entire episode without the cheese factor.  But this is CBS, and  with the exceptions of certain shows, cheese is a requirement.  More than that, I struggled to buy Cat being able to inspire ANYONE.  They have spent 7 episodes establishing her as a hateful shrew.   They honestly expect us to believe that Supergirl would tell Cat she inspired her to do different and better?  What kind of codependent abusive relationship practices are this show trying to push on us?  Cat consistently tears Kara down-but Kara continues to look up to her?  It's not like Kara needs this job to further her superhero duties-why doesn't she quit?  What is happening here? 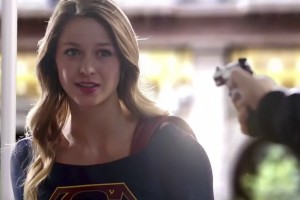 Cannot Kill the Battery: Why oh why oh bloody WHY do they keep writing things into this canon that are nothing short of infuriating?  So Supergirl and Superman are like batteries who drain quicker than an iPhone and take just as long to recharge?  Whose idea was this?  What sense does it make?  I assumed after the last episode that Kara blew her top because she poured so much grief, anger, sorrow, and rage into destroying Red Tornado.  It made sense-she drained herself physically and emotionally.  According to this episode, she's going to go through this like it's a menstrual cycle.  Even if she didn’t go full steam ahead in her battle with Red Tornado, she was going to lose her powers for a bit.  THAT. IS. STUPID.   And no, it doesn't help that Superman goes through the same thing-that is stupid too.  I don't know who may have told them this, but this feature of our superheroes don't make them more interesting.  AT.  ALL.

I had so much fun watching this.  Even though there were a few minor issues that I struggled with, this is a vast improvement on previous episodes and continues to world build.  When J'onn revealed himself, I proceeded to spike the ball, drop the mic, do the Snoopy Dance, and party all over my living room.  I appreciate this episode not ending with the throwaway scene of Kara flying and smiling.  Astra knocked her out of the sky and reminded her that she is still a threat to be dealt with.   I look forward to the advancement of the storylines and the direction the show is going.