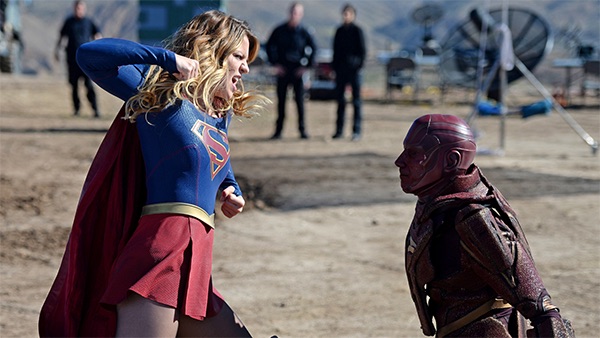 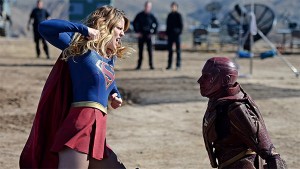 Supergirl struggles with some anger management issues at the same time General Sam Lane visits town to enlist her assistance in testing a new android, Red Tornado, designed to hunt the Kryptonian prisoners of Fort Rozz. During the exchange, Kara triggers a survival instinct in the android, who disappears and begins terrorizing the city, specifically targeting the Lane family. Meanwhile, Kara and Alex ask Winn for help hacking into the DEO database to get information about Jeremiah’s death. They learn that he worked a mission with an agent in South America, where they were tasked with apprehending a hostile agent. They were presumed dead after no contact until a month later when the other agent arrived with no injuries and no memory of what happened. The agent’s name: Hank Henshaw. Alex speculates that Hank may have murdered her father. She is not aware of Hank’s glowy eyed tendencies.

This review is going to deviate from normal this week. Usually I do a list of highs and lows. However, I feel I need to address the elephant in the room. The show continues to be entertaining. However, entertaining does not equal flawless, and stunts aside, Supergirl continues to struggle with some major flaws. I’d like to blame it on a freshman season, but I’ve seen plenty of other recent comic properties who have delivered consistent writing, strong character development, and performances and storyline consistency in their freshman season. In today’s era with some many talented writers, actors, directors, and producers, there is simply no excuse for the struggles that Supergirl is experiencing. 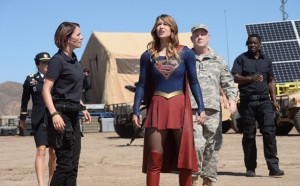 Kara can be a compelling character.   Melissa Benoist in some of her scenes in this episode showed some range in being able to deliver a performance that highlights what has to be a difficult journey. Kara arrived to earth as a teen girl. She basically watched her family, friends, and home destroyed after being handed the heavy responsibility, as a teenager, for looking after a baby. When she finally arrives on earth, even that responsibility, a duty that could have helped ground her in the wake of such great loss, was lost to her as well. Her cousin dumped her with a family of strangers and left her there. While it might be explained if he visited, that is still an awful lot for a young woman to go through without the benefit of counseling or family support. Add to that adoptive parents who told her to hide who she is from the world during a period where no individual ever really wants to listens to the adults in their lives, and you have a recipe for a girl with a lot of repressed grief, sorrow and rage.

This week’s episode finally addressed that. I appreciate the build up to it. It didn’t feel forced or unnatural, and it made perfect sense. Of course she is hurt. Of course she is angry. She’s had all of these expectations foisted on her, but was never given the opportunity to truly grieve everything that she has lost. What I am struggling with on this show is the poor way they are writing and directing other aspects of Kara. Around men she is interested in she is hapless and ridiculously juvenile.

To be frank, the women on this show are simply not written very well at all, which is sad for a network that seems to pride itself on pushing shows with strong female leads. Cat is nasty and spiteful for no real reason except she’s trying to impress her mother. Alex is incredibly one-dimensional and one note. She doesn’t pull off the supportive and wise sister in the same vein as Jessie L. Martin as Barry’s dad in The Flash, created by the same crew.   Lucy Lane was introduced with promise-a plucky yet driven career woman with a history with our Jimmy Olson. This episode reduced her to a jealous spiteful shrew, hateful towards a woman she's had no real interaction with based on unjustified, and frankly infantile insecurity regarding Jimmy’s interactions with those who wear the House of El symbol on their chest.

We are early in the show, and the series recently was given the green light for a full season order (20 episodes in this case since the season started so late), so there is still time to fix the glaring problem with the way the showrunners have been portraying Kara and her female counterparts. One can only hope that the decline in ratings the show has seen over the last few weeks is a wake up call to do better. 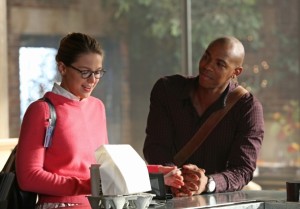 Having said that, the episode was entertaining. We got a glimpse into the relationship dynamic between Lucy, Jimmy, and her dad, which led to one of my favorite moments in the series. After General Lane showed his poor dinner etiquette by basically telling Jimmy he was simply not good enough for his daughter (tinged with a bit of the ‘cism), Jimmy spends time punching out his anger with Kara and drops one of the truest lines ever spoken on public access television. “It’s not like black men are encouraged to get angry in public.” With that one line Jimmy summed up the challenge he (and quite frankly, Black men in America) has been dealing with since arriving in National City. Living in the shadow of Superman, dealing with the disrespect from Cat, and now from his girlfriend’s father, he is understandably fed up, pissed off, and done. Like Kara, he doesn’t get agency to express that anger, regardless of how justifiable it is. The exchange between Jimmy and Kara which allows her to uncover the root of her discord, made the episode immensely enjoyable. I hope that we see more moments like this coupled with compelling action storylines related to the Supergirl universe.

I'm with this show until something majorly bad happens.  I don't anticipate that.  However, in a way it feels as though they are either coasting on the success of their other properties, failing to give this show it's proper due, or they have over extended themselves by launching several properties in close proximity which is stretching everyone behind the scenes thin.  Let's hope the show course corrects with its' character portrayals.