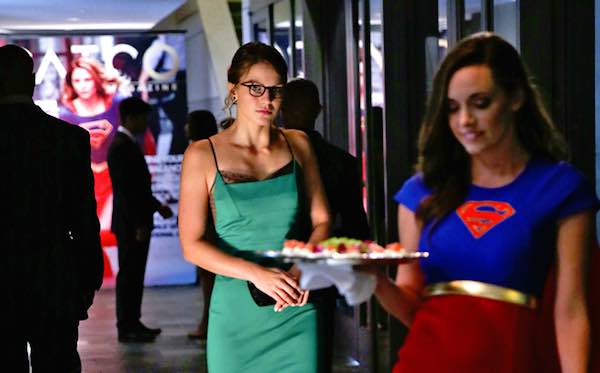 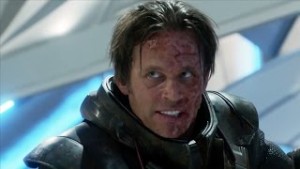 Kara is getting better at the superhero gig, but still doesn’t seem to know when to keep her mouth shut. She lets it slip to Cat Grant that she is Superman’s cousin. Everyone knows the first rule of being a superhero is to keep your identity a secret to protect your loved ones. Now, while that ship has sailed with a good deal of the folks working at CatCo, having it published all over the world isn’t helping her case and painted a big bullseye where the House of El symbol should be on her suit. Enter Reactron (Chris Browning, Agent Carter), a human using high tech equipment of the nuclear kind to attack anyone connected to Superman. Of course, since she just shouted from the rooftops who she is related to, this causes Reactron to come for her.   This leads to a semi-cameo from the Man of Steel, more shenanigans with the Supergirl gang, and a showdown that has a more satisfying conclusion than the previous two episodes. We also meet Lucy Lane, Lois’ little sister. I cannot be the only one who thought she looks like Lucy from Peanuts either. If you didn’t before, you do now. Or at least you are thinking about it. You’re welcome.

The acting was much better this episode. Melissa Benoist is finding her stride in the role, and seems more natural in it. However, they are still writing her as though she is a hormonal 13 year-old when it comes to interacting with the men in her life, which is beneath her. Benoist pulled off some powerful performances on Glee, which is an over the top show, but had some very poignant moments (Shooting Star being a standout performance for her).  Even still, the show is getting into an enjoyable rhythm.

Stronger than Yesterday- At first, I was worried that the first several episodes were going to be an exercise in Kara trying to save the world only to have others save her. After all, technically, she didn’t win that fight against Astra. The DEO swooped in and distracted Astra right before Astra put another beat down on Kara. I shouldn’t have worried. While there was the required scene of “the hero gets bested before licking their wounds and jumping back in”, Kara, with a little help and advice from her friends, saves the day. This is good. We are seeing Kara grow into her own kind of hero, on her own terms.

Don’t You Know That I’m Toxic? -I mistakenly mentioned that a mole was released into the DEO after the fight with Astra. This is because I thought the glowing red eye treatment for Hank was the result of him being replaced by a Kryptonian at Astra’s command. I apologize for that mistake-turns out Hank may have been a mole from his first joining if the red eyes are a hint at who he will be revealed to be later on.  He gives more glowing red eye treatment, piquing our interest regarding his motives. After all, he is still technically helping Supergirl. However, we don't know if it is because he is sincerely on her side and planning to use her against his adversary, or playing a wicked game of chess for a bigger prize. I won’t spoil who he probably is here for those who don’t follow the comics. If you really want to know, use your Googles. 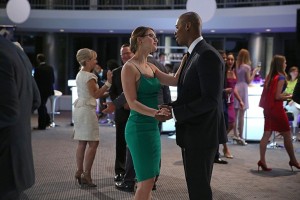 Black is the Color of My True Love’s Hair-Or brown is the color of his scalp. James likes Kara, more than he should, and it leads him to call in Superman to help her.   We get a brief profile cameo of the Man of Steel coming to save his cousin from Reactron. This causes tension between Kara and James. While I am not a fan of them throwing the love piece in so soon in the series, I appreciate Kara’s genuine reaction to it. She was pissed-and rightfully so. As she said, if she were Clark, he would not have done this. She recognizes what Cat warned her about two episodes ago-the double standard as it relates to women is present, even for an alien super being. I love that the show is continuing to address this and hope that it continues to do so. It makes for good storytelling. Now if we could just get them to stop spilling the tea about EVERYBODY’S IDENTITY!!

Here Comes The Sun…Son? Sun.-Supergirl is a property that can build on its own. While in the past it hasn’t been handled well on the big or small screen, this is a chance to carve out a unique identity. I need the show to resist the desire to call on the name of Superman/Man of Steel/Clark Kent in every episode. She’s his cousin. We get it. We establish that EVERY WEEK in the opening narration. Having him be the center of every conversation with Kara is driving me as crazy as it seems to be driving her. She loves her cousin. We love her cousin. We just don’t need to talk about him every week in a show that should be focused on her journey.  Trust that the audience is here for Supergirl, not for a hopeful glimpse of Superman. That is, of course, unless they plan to bring in Tom Welling. Then I am here for it.  All day everyday. 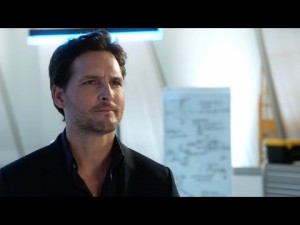 Didn’t Cha Know?- So, apparently the citizens of National City are just as clueless about the physics, mechanics, and utter DANGER of treating a fight between a man using nuclear explosions and a Kryptonian like a Friday night boxing match. This was probably the biggest problem I had with this episode. It was unrealistic and was a throwback to the days of the Donner Superman series, specifically Superman II, where the denizens of Metropolis just hang around in the streets watching Superman fight three Kryptonians while falling cement rains down on their heads. That’s okay though, someone brought popcorn apparently.   I’m sure the bus driver just wants to get on her way to the hospital-but I get the feeling the EMTs are chilling watching the show.   I desperately need shows and movies involving any character from the planet Krypton to stop that. Really, please stop it.

I said it the first two weeks, and I will say it again this week-I am enjoying this show. However, this week, I am more excited than I was for the direction it could take. The acting is improving, the Kara story is taking front and center, and they have me interested in the direction the Hank Henshaw storyline will go. Keep tuning in!