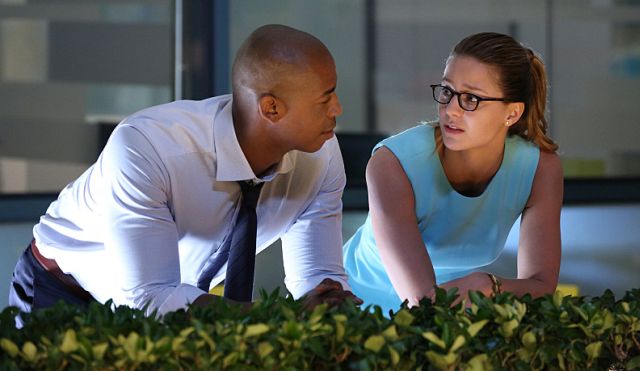 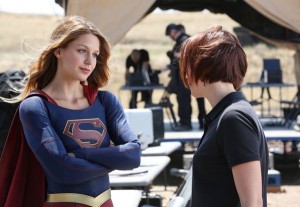 Week two of being Supergirl and Kara is still learning the hard way that being a superhero isn’t easy. It could be because she was in full fledged hormonal teen mode when she arrived to earth, but she seems to believe that she can just jump into the role without the growing pains. Henshaw, Alex, and the DEO are working with her to train and prepare her, but her well-meaning but ill-advised friend Winn is encouraging her to go for bigger targets. This results in a series of mishaps that brand her as a menace to the city as opposed to the savior she wants to be. At the same time, the menace from Fort Rozz continues to grow, bringing Kara face to face with her Aunt Astra and unleashing a mole into the DEO.

This episode was slightly better acted than the pilot episode. We had more moments of Kara using her powers, and the fight sequences are still very stunted and dated. Kara is still growing as a person, using a pep talk from an unlikely source to energize her into growing into a bonafide hero.   Melissa Benoist still struggles with playing the wide eyed ingénue. This look worked fine on Glee, but seems overdone on this show. I am hoping that as we go into the season more she learns the art of subtlety in her acting.

Training Schedules: Kara got a hands on training session with Alex. Kara walked in thinking “I’m Supergirl, I got this.” Kara proceeded to get her ass handed to her by her sister, who had weakened her by putting her in a room with Kryptonite emitters. It was entertaining, to say the least, to watch a hero from a family people think indestructible learn to handle herself without over relying on her natural strengths and abilities. Kara was forced to learn HOW to fight, not just attempt to overpower everyone and everything, a strategy she keeps trying to use and failing miserably at. While Alex’s Mister Miyagi routine was heavy handed, it was what was needed and rarely seen when dealing with hyper powered superheroes.

Cat’s Pep Talk: It might seem contrived, but Kara needed to be guided on her superhero journey, and who better to deliver this notice than her dismissive boss? Even a broken clock is right twice a day. “Calm the hell down” was the best advice Kara could have gotten. Her sister is telling her play it safe.  James is telling her "you are part of the Super family, you can do this."  Winn is telling her to go big all the time.  While they all mean well, they are not helping her at all.  Only Cat could deliver proper advice so bluntly and directly-and in a way that Kara needed to hear.  She needed someone to tell her to reign it in and work her way to what she needed to be able to do while addressing the double standard she was going to face as a woman on planet Earth. 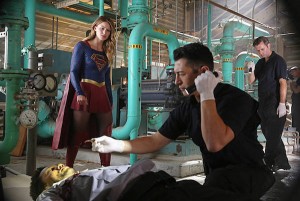 Kara Knows Some Things: It was nice to have Kara share aspects of her history that not even Clark knows as Superman, such as the meaning behind the famous House of El symbol. I also love the confidence with which she shared the information, letting James know that as clueless as she is about some things, she knows things. Clark is idolized as Superman, but the core of his background is a mystery to him. She has that background, the identity building pieces. She just doesn’t know what to do with them yet in this world. As she mentions, she doesn’t want to do this Clark’s way. She wants to do it her way, but people seem to want to make her the female version of him. Kudos to her for standing up and saying I am a woman in my own right, and my identity doesn’t need to be defined by who I am related to.

Introducing Astra: Some might consider this too much too soon, but I appreciate them not belaboring her introduction. Sitting in the shadows having her be evil from afar would only work for so long. Having that introduction being a lesson in why Edna Mode’s No Capes policy was a vital life lesson was well done. (I cannot be the only one who yelled “NO CAPES!” during that scene. Anyone?)

Hyper-speed Pacing: The pace of this show is simply too fast. It is a throwback to television shows from the 20th century where the plot arc is wrapped up neatly by the end of the episode, and it’s all smiles and cotton candy. While the Fort Rozz enemy scenario will be a season long plot, the show could use some gravitas to make it more compelling.

Kara So Fragile: While it is important for Kara to learn how to use her powers, having her be the weakest character on the show will only work for so long. While I laughed at Alex and Astra kicking her ass, I also cringed at it. It is not something we see from male superheroes on their first outing. Indeed, usually with male superheroes they become weakened after string of successes. I am just not comfortable with her being this inept, hapless character, ESPECIALLY since she was older when she came to earth compared to Clark. 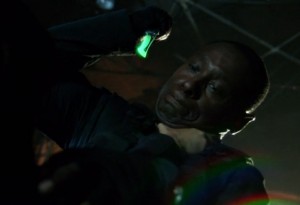 Forced Character Development: There is nothing about Henshaw that makes me care that he lost his family. This little gem seemed forced in to make us believe Hank is less of a jerk than he actually is. It was forced in and for what seems to be no reason except to make him likeable. Being a jerk could work for him-the writers need to trust the audience that we can like a jerk if said jerk is well written and acted. Just look at Harrison Wells from The Flash.

Love Triangles: It’s already starting. Winn is Kara’s Ducky. James may not be her Blane, but the macho posturing when she asked for help is a sure sign that they are going to take this in that direction, and I am not looking forward to it at all. There is no build to this, and it’s a bit contrived. James is a fine piece of man candy-that doesn't mean we have to throw them together out the gate.  SIDE NOTE: If you don’t get the Ducky and Blane references, you have to go watch Pretty in Pink. It’s required watching if you are a child born in the 20th  If you were born in the 21st century-what are you doing reading this?  Just kidding-go watch the movie.

Supergirl is off to a bit of a rough start, but it’s just campy and cheesy enough to not be painful. I will continue to tune in and be entertained.