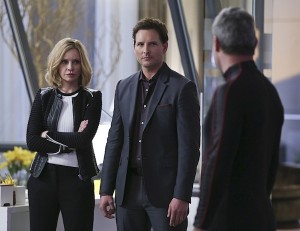 National City is quarantined as Non enacts the full power of Myriad, which has the citizens under his thrall.  Kara enlists the aid of Max Lord and Cat Graham, who are unexpectedly unaffected by Myriad’s power.  Alex and J’onn visit her mother for sanctuary.  Indigo pretends to support Non’s plans but has plans of her own for how the world should look moving forward.

This was a satisfying episode.  It took them 19 episodes, but they finally figured out how to pace an episode so it felt more even instead of them rushing through a story.  Watching Kara struggle without her usual backup and allies was good, because it is forcing her to come into her own as an adult and a hero.  Cat grant provides quality advice with her signature snark.  Max Lord is…well…Max Lord, with his extreme and xenophobic solutions.  David Harewood continues to deliver as J’onn J’onnz. The only weak links in the episode was Alex being Alex, and Not-Mystique getting way too much air time.  I can’t explain why this episode works.  I just know that it does.

The End is the Beginning is the End: Picking up where we left off in Worlds Finest, we see all the citizens of National City marching aimlessly in the streets.  I don’t know how big National City is, but they seem to have The Walking Dead’s sense of time passage because folks have been marching for a minimum of 13 hours given the position of the sun.  Kara can’t get through to anyone.  She has no help.  Alex and J’onn are gone.  The folks at the DEO are completely under the thrall of Non, who orders them to release all of the alien prisoners.  Except for The White Martian.  Even Non knows not to play with THAT one.  Kara intervenes, using her pod to knock Lucy on her ass after taking a Kryptonite bullet and destroying the console, stopping the prisoner release. 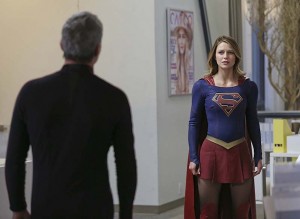 I know, I know, that paragraph seems like a confusing batch of nonsense, but watching it played out on screen makes more sense than I can explain.  Kara is desperate for help.  Of course she thinks the DEO has something in place to block alien tech-and of course they don’t, but it was a smart move to check it out.  Traveling to CatCo didn’t make sense in terms of next moves while waiting to hear back from her cousin (who only communicates via text message and instant messenger apparently) but trying to reach her friends is a move she would make.   If her cousin can’t help, then she doesn’t know what to do. This of course leads to the greatest troll moment on a television show this year-we see what appears to be an incoming Superman, who then promptly stops before we see his face, drops to the ground, and joins the thrall of walking zombie people.  I know a lot of people were PISSED about this, but all I could do was laugh, because it was a troll move on an epic level, and well executed, so I’ll allow it.  People have been clamoring to see Superman on this show-you just got all you are going to get to this point.  The show is not about the Man of Steel, and while I secretly want to see them interact, I know his presence will overshadow Supergirl on her own show.  I have made peace with him not being featured. Well done Greg and Andrew…well done. 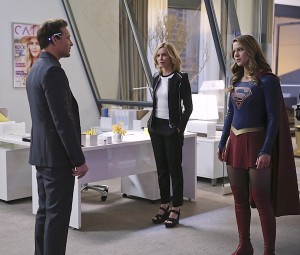 I’m Lost Without You: This episode highlighted how much Kara depends on the Scooby gang and her family and friends.  She was truly lost without them around.  Walking into CatCo and seeing her friends and coworkers completely oblivious to her presence was painful to experience.  It was made worse when Non decided her friends were good AT&T conduits and spoke to her through them, compelling James, Winn, and Kelly (who shall be referred to as Lady Red Shirt) to jump from three different balcony points.  Kara was not fast enough to save Lady Red Shirt, but we figured that since before this episode we never interacted with her much less knew her name.  Fortunately, Cat showed up to work and seemed unaffected, thanks to Max Lord, who sent her diamond earrings with tech that helped block the effect of Myriad.  He is sporting a jazzy earpiece that helps him in the same way.  Having to ally with Max presents a whole new range of options, none of which Kara are comfortable with.  She elicits advice from Cat, which we see is really an attempt to get guidance and direction.  Cat wisely advises her, but leaves the decision in her hands.  This is an important moment for Kara.  She has to stop hiding behind her fear and insecurity, and come into her own without others providing direction.  She has to learn to trust herself and make the hard calls.

Give You Hell: J’onn J’onzz continues to be one of my top three favorite characters on this show.  David Harewood portrays him with a great balance of grace, patience, strength, and determination.  His conversation with Dr. Danvers works so well.  When it is time to face off with Indigo, he drops the grace and puts on his cloak of bad-assedness (I know, it’s not a word, but you know what I mean) as he does what the audience has been begging ANYONE to do, and that is to throw Indigo’s ass into anything that would consume her in a big ball of fire.  At the same time, we see where his grace and loyalty can also cause him to compromise himself.  That compromise leads us to the lows of the episode.

Caught Out There: I cannot stress this enough-I CANNOT STAND ALEX.  This episode solidifies it.  She is completely selfish and absolutely useless.  When Kara calls to explain what is happening and tells Alex to stay clear, Alex decides that in spite of the fact that she has no alien physiology to help her, she just has to go back to the city because she will not be susceptible to the effects of Myriad.  Is it because she is magic? No, it is because she is determined, and apparently Alex’s determination can overcome science.   J’onn going back makes sense.   He’s an alien-he is protected.  He can add his strength to Kara’s, as well as his brain power, and figure out a solution.  Alex going back does not.  But she browbeats J’onn into taking her back, convincing him that his telepathy can protect them both.  So in a situation where he needs to be focused to work with Kara to take down Non and stop Myriad, he now has to babysit her.  The audience knows this is a dumb idea.  We know it won’t end well.  When they reach National City what happens?  It is apparent that J’onn is weaker because, as he clearly states, trying to protect her useless behind and fight off Myriad is difficult because of the multitasking.  This results in Indigo getting the better of him, stabbing him, resulting in an injury that causes him to pass out.  Well guess what he cannot do when he is passed out?  Use his telepathy to protect her.  So of course, Alex becomes a thrall.  I really, sincerely hope they plan to write her out of the show because this is just ridiculous.  She could have come back to National City on her own in defiance of everyone and ended in the same result-her standing before Non while he monologues his evil plan to her.  There was a point where she was monologuing at Non and I was hoping Indigo would just kill her mid-sentence.  This character has been a continual problem the entire season, and I honestly believe it is a combination of the way she is being written and the way Chyler Leigh is portraying her.  Let’s kill her and move on, especially since we now know that Jeremiah is still alive.  We can live with the death of one Danvers.  The show is not above it-they showed us Lady Red Shirt jumping to her death and her dead body on the ground.

Bad Romance: What is the purpose of Not-Mystique?  Seriously I want to know.  First, I didn’t realize they had an even more terrible wig they could put on her.  Second, she was walking around chortling evilly and plotting behind Non’s back with her fake Freddy Krueger hand, and I found myself not caring one bit.  I loved Laura Vandervoot on Smallville, but this role is leaving a lot to be desired.  I get that she wants to take everything a step further, but they could have Non do that.  Her character is annoying and pointless, at least as they have portrayed her so far.  She wants to destroy the human race.  This appears to be her only goal, and she will undermine Non to do it.  The only problem with that is currently, Non’s plan makes more sense.  As thralls, the human race can work as a super computer, working to eradicate the problems they have created.  And yes, I cannot believe that I just sat here and typed a statement that basically endorses slavery, but when I look at Not-Mystique, I can’t help but be irrational in my thoughts, because she’s just that annoying.  She was one of the weakest points of what was an otherwise seamless episode.

This episode ends with Kara and Alex, clad in a snazzy Kryptonite suit with her Kryptonite light saber coming to blows.  I hope that the season finale is as satisfying as episode 13, which was slated to be the original season finale.  The fact that they let go of the cheese factor for this episode and worked to give us a decently paced story gives me great hope for the series moving forward.