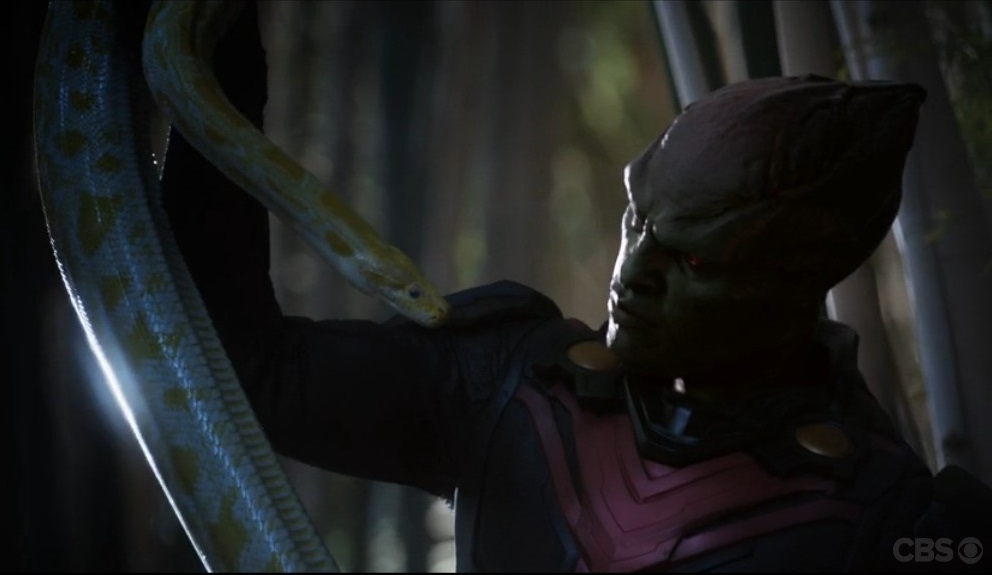 So, just as I feared, this episode continues the habit this series has of being inconsistent and missing opportunities.  From a logical standpoint there are connections that should be made and events that should be taking place that are not and it doesn’t make sense.  We do get a glimpse into the question J’onn refused to answer last week, which makes his silence even more puzzling.  The fallout from Kara’s scorched earth tour is minimal, and given the way J’onn is being treated, screams of privilege.  Cat, however, was in rare and excellent form for a change.  She was shrewd, cunning, insightful, and every bit the appropriate newswoman she should have been the last few weeks. 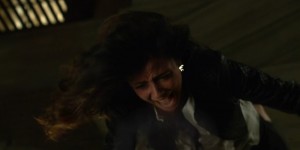 The Big Payback: Siobhan is pissed that Kara’s reveal of her plan to email info about Supergirl to competitors got her fired.  Winn is giving her a pep talk, which gives her the bright idea to stroll unchecked into CatCo and use Kara’s unlocked computer and email to send Cat a message about how ain’t shit Kara thinks she is.  Now, you might read that and think, this doesn’t read as an episode high.  It isn’t.  As a matter of fact, read the first few lines of this paragraph with the deepest levels of sarcasm. That’s not the good part.  The good part is when Cat calls her in to call her out, since Winn helped her figure out that it was not Kara who sent that email.  Cat, instead of being the petty wanker she was the last several episodes, quietly calls her out, and then lets her know if she pulls a stunt like that again, she will have her arrested and prosecuted.  It’s good because they seem to have come back around to Cat acting like a grown woman instead of a ridiculous stereotype.  It also leads to Siobhan’s introduction as the Silver Banshee, who has it in for both Cat and Supergirl.  I am curious as to how they will play the Banshee storyline and if they will go deeper into her background and origin. 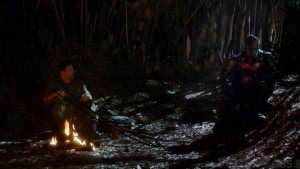 Memories:  The best part of this episode was the flashback where we discover the fate of Jeremiah Danvers (Dean Cain, The Adventures of Lois and Clark), and learn that Hank Henshaw was a real jerk.  Hank could have been Trump’s Vice Presidential candidate-that is how xenophobic and hateful he was. If I didn’t know better, I would think the writers lifted some lines from one of Trump’s many speeches.  Never was I so pleased to see a character take a long walk off a short cliff as I was when Jeremiah threw Hank off the hilltop to save J’onn.  We also learn that the real Hank was the one responsible for Jeremiah’s “death.” We later learn Jeremiah is not actually dead.  When J’onn brain wipes the random overdressed asshole marine dude whose name I didn’t bother to learn because he was that much of a cliché, he discovers that Jeremiah did not die on that hilltop but was being held in Project Cadmus, which was where they were transporting J’onn for dissection and Alex for Gitmo style interrogation.  Alex and J’onn are now on the run, having been released from captivity by Supergirl and Lucy and in search of Project Cadmus.   Dean Cain and David Harewood did some fantastic acting during these sequences (although I remain perplexed by Hank Henshaw’s Tuvok-esque hair style in the flashback).  It also felt a little rushed that we went from “I saved you from a snake” to “look out for my children, random alien dude,” but I will allow it because Dean and David delivered the scenes well.  It answered questions we had been wondering all season-what happened in that forest?  We know J’onn told us Jeremiah died trying to save him.  What we didn’t know is that J’onn didn’t throw a punch in that fight.  The makeup and special effects for Martian Manhunter just continue to get better with each episode.  We also were introduced to a potential new threat and the reason Superman won’t work with the government-Project Cadmus. 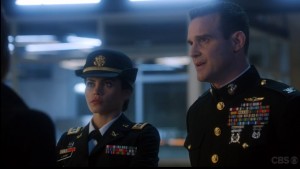 It’s the End of the World As We Know It (But I Feel Fine): So Project Cadmus.  Red Tornado.  To some extent, Maxwell Lord.  Myriad.  Fort Rozz.  The show keeps introducing threats…and then letting them hang.  It almost feels like these threats were going to be introduced to entice the network into giving them more seasons.  As a result, we have so many threads (and threats) hanging out there and not moving forward.  There isn’t even the occasional throwaway line when we are at the DEO that the threats are being researched/tracked, but new information is unavailable.  I might forgive all this messiness if they did something that small.  We are not even getting that. The threats may converge, and I am holding on to see if they do, but right now it just feels like a crowded field.  I would much rather them save these extra external threats for subsequent seasons or season arcs.  We still don’t know where Red Tornado is-we know Maxwell Lord has his arm, but the rest of him is gone.  We don’t know if all the Fort Rozz prisoners are throwing in their banner with Non or are individually still doing their own thing.  Max is off doing Max type things, but we don’t know where he stands.   Non uploaded something into the network we have, but there seems to currently be no fallout from that-and that was four episodes ago.  Now we have Project Cadmus which seems to be the big alien boogeyman.  I need the showrunners to focus their efforts so that their storylines will coalesce and become stronger and more enjoyable. 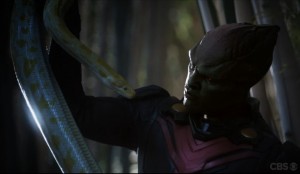 Brighter Discontent: All these superhero shows come to life, should make me happy.  “But the ordering of objects couldn’t hide what’s missing” as the song goes.  The inconsistencies are causing more problems for me as the series goes on.  I was willing to forgive them early on.  Since we are in the final 7 episodes of the season, episodes that were shot after the original season order wrapped, I expect better.  We aren’t getting it.  I said this last week-you cannot, in this world that you have built, have J’onn in jail for being revealed as an alien, without also locking up Kara for her antics last week.  As the reporter in the cold open pointed out-yes, she’s saying she was under the influence of something.  What happens to us if it happens again?  Kara is new to the superhero scene.  It seems that in this universe they barely tolerate Superman.  Given the lengths they were willing to go to in dealing with J’onn, and by association Alex, you cannot make me believe that Kara would not be hemmed up under a Kryptonite lamp awaiting her own dissection.  The random overdressed marine asshole shows us this-the only reason they tolerated Supergirl was because of Hank.  Once Hank was revealed to be dead, the entire tone of this show should have shifted.  Was Kara in league with J’onn from the beginning? After all, they are both aliens, and if Alex knew, then Kara must have known.  Mind you, the tone would not need to stay shifted, but it should have.  Kara walking the streets, trying to save people, being all sad on her couch with her munchies MAKES NO SENSE.  Her free range access of the DEO during this time where it has been revealed that their leader has been an alien in disguise for all these years MAKES NO SENSE.  The fact Cat is now pretending like she didn’t just tell the world Supergirl couldn’t be trusted last week MAKES NO SENSE.  Alex not heeding J’onn’s advice and making the smart play by distancing herself from him MAKES NO SENSE.  He’s explaining that the DEO would be better with her in it, especially because we all know had it not been for J’onn’s brain wipe of the asshole marine guy, General Lane would have rolled through to run things.  Lucy being back in the military in full dress blues after having admitted a few episodes ago to resigning her commission to try to make things work with James MAKES NO SENSE.  I am not military, but I have a lot of family in the military, and in talking to them that’s not how any of this works!  Lucy now being the head of the DEO when she’s had no experience whatsoever MAKES NO SENSE.  It seems wild that I’m discussing things not making sense in a show about alien beings with super powers, but there needs to be a base level of logic to any series.  This show tried to establish itself in the real world.  It needs to play by real world rules.  These inconsistencies and issues take me out of the episodes.  Perhaps Berlanti and Kreisberg are spreading themselves too thin.  Four series across two networks is a lot to track along with their other responsibilities.  Joss Whedon admits to running into this issue when he was helming Buffy the Vampire Slayer and Angel, particularly when Buffy moved to another network.  It’s causing Supergirl to be the weakest of their series, and I absolutely hate it because I need there to be a female superhero that is well done!  I do not think that is too much to ask.

Next week we get our Flarrowverse cross over with Grant Gustin guesting as Barry Allen/The Flash on Supergirl.  I am excited because Grant brings his A-game every time, so I am sure we will see some good performances next week.  That said, we have to right the ship.  You don’t know how much I need this show to be good.  I criticize because I love the character and her potential.  I want to see her treated well on screen-in her writing, her portrayal, and her story arcs.  She deserves it.